1/ Imported Flows do not play the sounds I’ve set for them in 3.1, it appears to revert to the default voice for the part name. For example, when I write a vocal part I often change it to a cello sound in the Halion player - I can’t work with that ah sound, too slow on the note hits. Imported a flow with a vocal line and it’s playing the voice Ah sound…so I’m guessing that the Flow does not contain information about players instrument assignments - other than the default by name? And that swapping the played sound is a Project setting and not a flow setting? If so then that’s my bad for not knowing.

2/ Several times I get no audio after starting Dorico 3.5. had to restart.

3/ the mixer doesn’t appear to be working - no longer allows me to solo or even view the outputs from each instrument. The meters are not even moving - apart from the reverb and main output.

3/ Missing fonts. No, they’re not missing, they were used in 3.1 and this is the same computer. And if I bring up a text box I can select the missing font.

Worried about opening a large project created in 3.1 and thinking I’ll create a separate folder for 3.1 projects and keep 3.1 on my system until things settle down. Staring new projects maybe ok but I get nervous when opening a project with months of work that starts to misbehave like this…

1: importing flows doesn’t import players, as I understand. Either you can match existing players, or new players according to the instrument type are created.

Whether you can bring up the font is irrelevant - can you bring up the specific style of that font? I certainly can’t - Font Book tells me that I have no such style of Avenir installed. 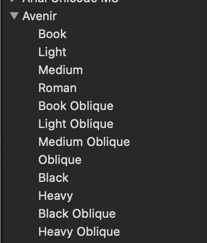 Are you importing flows into a brand new 3.5 project?
Did you try simply opening and saving (at least) the first flow as a 3.5 file and then importing subsequent flows into that?

Re the players not carried into Flows, I guess that’s the way it is. Not a big issue as it’s generally just the voice that I swap out.

Re the fonts - I still get the alert missing message on opening this particular project, as per my screenshot - but all the font styles are available, and the default I use is Avenir, titles etc all present and correct. I just tried adding some text and was able to select and view every style of Avenir. So definitely something not quite right with that alert.

Re the mixer - a mystery - today it’s working fine.

Thanks again for all your input.

able to select and view every style of Avenir.

I’ve been using Avenir regularly for a number of projects over the past 7 weeks (starting in 3.1 and then using 3.5 from as soon as it came out) and I always get that missing font dialogue, but it’s harmless as the file opens up normally once I’ve pressed ‘OK’.

I remember some discussion about how the missing font dialogue worked back when it was a new feature in version 3.0 and, whilst I can’t remember the details, I think it has something to do with the lack of a ‘Regular’ font-style in certain fonts and that it is ultimately harmless when it appears in these circumstances.

3/ Missing fonts. No, they’re not missing, they were used in 3.1 and this is the same computer. And if I bring up a text box I can select the missing font.

I have this behaviour too in 3.5. The alert is popping up, that even system fonts on my Mac are missing.
But if I don’t doo anything then and close the warning window – miracle, miracle – the fonts are showing up correct.

If you set your Default Text Paragraph Style to use a font for which no “Regular” style exists, you need to either:

If there really are situations where the Missing Fonts Dialog is appearing and the listed Missing Style appears in Font Book (or in Windows Control Panel > Fonts > View Installed Fonts), I’m sure it’s worth reporting it here.

Thank you for that, Leo, really useful.

The point I’d like to make in relation to this and the OP is that the behaviour hasn’t changed for me in this regard between 3.1 and 3.5.

If there really are situations … it’s worth reporting it here.

The following steps reproduce this issue for me:

Perhaps the question to ask is: why are the default factory supplied paragraph font styles introducing a dependency on a variant (italic) of a factory supplied music font (Petaluma) that does not in fact exist?

This is a known issue.
No doubt it will be remedied in good time.