In m366, I’m trying to figure out how to make those green notes in the bass stave (starting on beat 2 and beat 4) into half notes, just like the half notes that appear in the treble clef. I created them the same way so I’m not sure what’s causing them to be drawn differently. 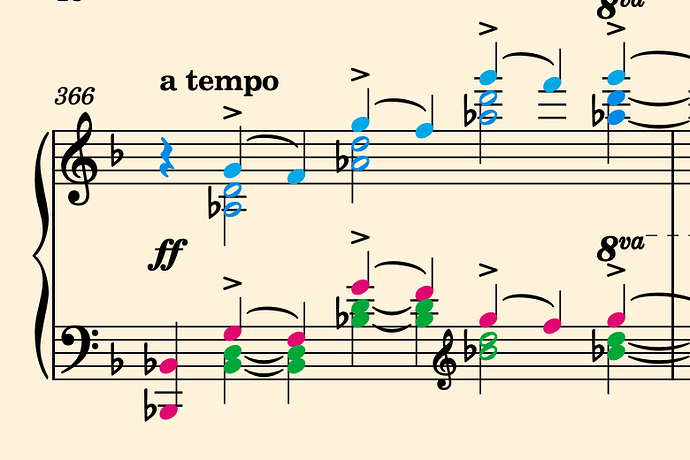 Without seeing the project itself, it’s not possible to say why those notes are notated in that way. It could be a specific combination of Notation Options, you could have a custom beat grouping set in the time signature, you could have some forced durations set. Can you cut the project down to a small chunk sufficient to reproduce this, and attach it here?

It might be because there’s a rest on the downbeat that’s been removed. For a quick solution, select the two tied quarters, press O, then 6, then 7.

@DanKreider your solution worked perfectly - thank you for this although I tried every other combination of lock duration and couldn’t seem to fix this.

@dspreadbury thanks for that offer too; I was about to do that until Dan’s suggestion fixed it.

I am having a LOT of problems in this score with vestigial whole rests appearing at all kinds of random times, seemingly for no reason, then I use Edit > Remove Rests, and all looks normal again. (For a while…then all hell breaks loose.) If someone can point me to some tutorials on how voices work and how I can easily identify or solve problems, I would appreciate it. This is a complex orchestral score and I fear I have somehow gotten things into an unnecessarily complicated state that is near-impossible to fully diagnose via a forum post.

I mention the vestigial whole rests because Dan is correct that there was a quarter rest in beat 1, which I chose to remove.

It’s impossible to give a one-size-fits-all tip on voices. Best to show a screenshot of an example with colors turned on, and we can advise.