A collection of Instrument Filter issues 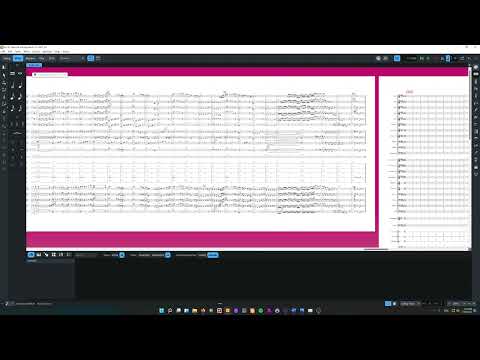 Who knows, maybe we can blame Windows 11. Sorry for the low rez video…1080 recording on a 4k display.

I believe both of these problems are fixed in our development builds (I fixed the issue where the selection is not kept in view myself, and I’m unable to reproduce the overlay not updating to match the newly-chosen filter from the Write > Instrument Visibility submenu). So please check this in the first maintenance update when it arrives.

Hi folks - here’s another one. Absolutely love Instrument filters by the way BUT

In this video I’m selecting something then pressing the “down” arrow key - I think i would expect it to move onto the stave below as normal, but the selection disappears. If I try to do it in write mode, the score jumps somewhere seemingly random and write mode disengaged…

I can’t see your video in my browser, but I guess the issue is that you’re navigating in Engrave mode and the selection is moving to a staff that’s not currently shown?

I can see the video, and it shows Write Mode, Galley View. I think he meant “note entry” where he said “write mode”. Apparently he’s trying to select downward toward a staff that is hidden by the filter, and the selection disappears.

However, I do not reproduce this problem, with or without the caret. I suspect we need more info about the staves that are hidden in this case.

Hi @Mark_Johnson and @dspreadbury Perhaps the video wasn’t fully uploaded to Dropbox when you tried Dan?

It was indeed write mode and in note entry mode. when I press down outside of note entry (in write mode) the selection disappears. There are indeed multiple staves hidden in between the instruments, and some of these are different “instruments” held by the same player (I am cheating the system slightly by using the same player for different singers - probably going to regret that later on).

Doing it again - when I press the down arrow while something is just selected, I can keep pressing it and it ends up in the right place - just have to click through the staves as normal. Not a big deal, but would be better if it only cycled through the instruments shown.

Similarly, now that I know what’s going on, I notice the caret does the same thing, except that first the score jumps disconcertingly to the left, so that the caret is to the extreme right of the window. I keep pressing the caret and it ends up where I want it to be however, and if I know where to look, I can find the caret again.

So - not the end of the world, but IMO expected behaviour from a user viewpoint would be for the score to stay where it is (not jump to the left) and for the caret to travel automatically from one visible stave to another, skipping the invisible ones…

I’m certain I can’t do it, but a great feature in a future update of this would be IMO the ability to input in multiple adjacent filtered staves using an extended caret, ignoring the hidden staves. I bet that would be tricky though - especially where insert mode is concerned…