I am working on a piece with a lot of divisi in the string parts. I encountered a problem with accidentals in the unison section right before the divisi begins. My assumption was that the music is just “mirrored” from one staff to another in this situation, but for some reason some accidentals are missing while the other unnecessary ones are showed. In the example below the top line is perfect and the bottom one seems to have a different accidental system somehow.

Yes, unfortunately this kind of situation is not correctly handled at present. It’s not at all ideal, but the best solution for the time being is to move the position at which the divisi starts earlier, and manually duplicate the music between the divisi sections. I’m sorry for the inconvenience caused.

As far as I’ve observed, this particular issue is that the key signature state of a divisi line (including a unison range expressed in that divisi line) can occasionally get stuck in a previous divisi’s key signature. Below is an example of missing necessary accidentals for C♯s and F♯ both in the unison range before the divisi and after the divisi, where the previous two-line divisi I had a page earlier was in two sharps. I imagine that is what’s going on here and is probably the case in your example, too.

(Since someone will ask, the second divisi flag is to disable group names on subsequent systems. I have tested to make sure it’s not related)

Here’s an example of an unnecessary cautionary accidental — again I believe it thinks it’s still in two sharps and thus thinks it’s quite necessary. 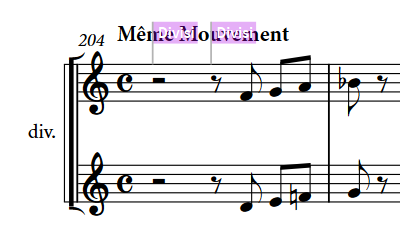 I have spent an hour rewriting this post trying to find an exact rhyme or reason to when and where this happens, but I can’t find it myself. Daniel is right that at least for now the best way to deal with this issue is layout-based — either moving the divisi flag somewhere or changing a system break. I don’t know why that corrects this issue, but manually “reminding” Dorico of the intended key signature state of accidentals does not work after a save and close.

An additional thing I’ll say is I am unable to reproduce these kinds of accidental issues in new projects. It seems to only happen once you get into larger projects, perhaps either due to more flows, or more divisi flags? I can’t say.

No, it’s nothing to do with project size. It’s to do with how Dorico calculates accidentals. Once you create a division that requires a new staff, that staff exists throughout the flow, even if it is not shown throughout, and it might be reused for a different division depending on the changing definitions of multiple divisi items as the flow proceeds. Accidental calculation relies on the contents of the previous bar, and depending on exactly what the situation is, that previous bar may have helpful music that makes sense to use as the basis of calculating the accidentals required in the following bar, or it might not. The transition from divisi to unison is also complicated: depending on what music was present in the final bars of the division before returning to unison, you might even require different cautionary accidentals in the unison music written for what was formerly the first division and what was formerly the second. Unfortunately it’s not possible at the moment for Dorico to solve every single one of these problems. I’m not even convinced that this is a completely tractable problem in its full generality, and my expectation would be that you should build proof-reading time into your work when dealing with complex divisi passages.

I’m curious to hear a bit more about what’s going on behind the scenes — it can make diagnosing likely problem areas easier and speed up proofreading. At the moment I must admit I just can’t wrap my head around it, which makes fixing it when it shows up a little wishy-washy.

If I’m understanding you correctly it seems both of your example situations imply only the first measure of a divisi or unison change as being one which should be affected with an accidental visibility issue. If accidental calculation relies on the previous bar, this would make sense — after that point, it should be relying on the content of its own previous bar, rather than a previous divisi/unison instance which might not be related accidental-wise. However, both of my examples in fuller context seem to show Dorico implicitly understanding all Fs and Cs are ♯ across two lines, both before and after divisi and unison changes. So, does this mean that the accidental state calculated from the previous bar at the outset of a divisi line needing to be visible can be carried through the entire passage?
https://i.imgur.com/F6ZmA2W.png
https://i.imgur.com/nGLl5cR.png (notice the hidden F♯ in m. 209 here)