My PT has Kontakt VST’s set by default. I’m attempting to an an additional instrument (in this case a Flute) and reassign its endpoint to be Note Performer.

I add the Flute which (naturally) opens with my default endpoint. I then add the NP VST and assign the Flute to it. However, it doesn’t get assigned properly. At first there was no sound at all. After a restart it played back Trumpet.

I’m just wondering if there is a method to add an instrument and have it “redirect” its endpoint to another VST. Obviously I cant’ apply a different PT or it will change all my instruments.

A corrallary question is: How does NP know what instrument to play if it’s not set in the PT?

In addition to changing the setting in the Routing section of the track inspector, you also need to make sure you change the expression map for that channel in the Endpoint Setup dialog.

Thanks, Daniel. I neglected to include that part of the process in my description, but I did in fact re-set the Endpoint Configuration for the Note Performer VST. I assigned Note Performer as the Expression Map.

It only plays sound (still Trumpet rather than the desired Flute) on Port 1. The other ports don’t play sound. I assume that’s normal for Note Performer.

When I open the Note Performer VST window I only get the Starter Window rather than seeing the Mixer as usual. Interestingly, it says to “Playback from the beginning to make Dorico assign sounds.” I did that and it didn’t seem to change anything. 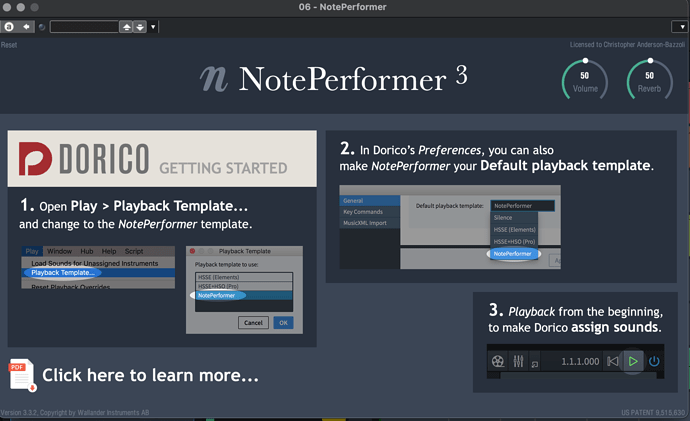 I set the EM in the Endpoint Configuration Window. I just used the one that came with Dorico. Is there anywhere else I can look to get the instrument initialized? 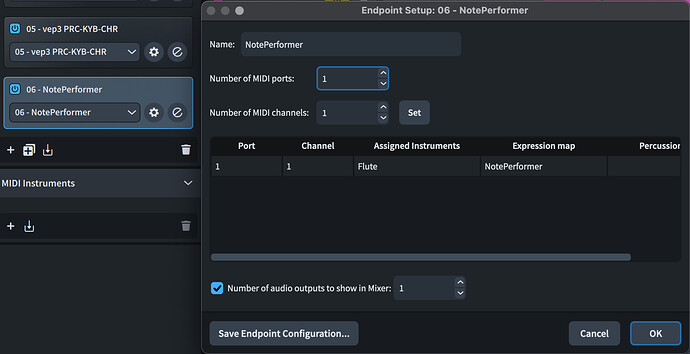 That did work although I had to then reassign the other flutes in my project back to their defaults. Not a bad work around.

Unfortunately, applying a new playback template to one of my existing projects tends to wreak havoc in other ways. I often have multiple upstem voices on a single stave assigned to different endpoint instruments. Even though I’ve been careful that no two endpoint instruments are assigned to the same port or channel, Dorico seems to run into conflicts and create new VST slots unnecessarily. In this case I started with one VST for strings and, after applying the same PT (with the added flute exception), I ended up with ten! But anyway, that’s a different problem…

Thanks for the solution. I did get the NP Flute I wanted in the end.