So I’m trying to make special markers, similar to rehearsal markers, for an aleatoric section of music.

In the performance of the music, time stops - the conductor then signals section 1, then section 2, etc.

I used repeats on the bars to signal the change in time, then I created system text and gave them enclosures to be above the measures. 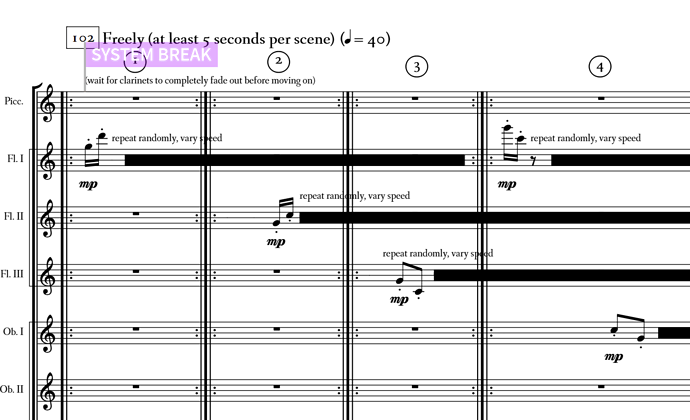 {If this was Finale, I’d create an expression for the number, give it an enclosure and pop it in the right spot and it would be there for the score and the parts.}

So the numbers in the score look ok. They’re far from perfect and seem to need a lot of adjusting manually. In the parts, however, the numbers are all over the place - because of the manual adjusting in the score. 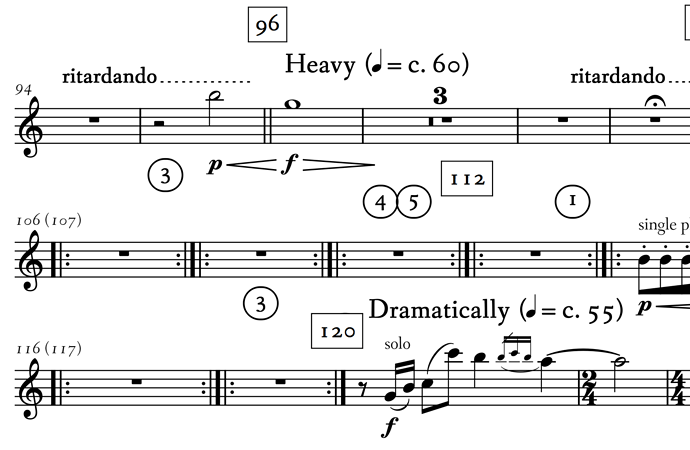 There’s gotta be a better way to do this that I’m missing. Any recommendations?

You could set all of them as staff text, remove collision avoidance, and hide them in the score layout in one batch action. It might be faster than manual adjustment.

Is there a way (in settings) to make the text align in the center of the measure without manually moving it to the middle beat?

No, I don’t believe so. But setting them as staff text will prevent a change in one layout affecting any other layout.

You could use Select More and move multiples at once, which would at least help.

Unfortunately it looks like when I hide them in the score, they also hide in the parts, so it’s just about the same amount of work as manually adjusting in the parts and leaving on system text.

Is there a way … to make the text align in the center of the measure without manually moving it to the middle beat?

You could use a horizonal line with zero width which goes from one barline to the next and add text in the properties panel which will remain centered above the measure even if its width changes.

You have “global” set in the bottom panel, and you want “local.”

damn, I totally missed that. Thanks for the help!