Amalgamation for piano not working

Hello, I’m having trouble with amalgamations specifically for piano. I’d like notes to be combined into a single stem instead of staying two separate voices whenever there is a rhythmic unison regardless of phrasing. I think this need happens in most keyboard music.

For example, in the attached project and screenshot below, I copied the first two measures from Piano 1 and reduced them onto the treble clef of Piano 2. While the notes were reduced to a single staff, notes were not amalgamated when the durations were the same. On the other hand, when I copied just the first measure and then reduce, the notes amalgamate as expected.

What I’d like to see is in Piano 4 (which I manually created) when I make any keyboard reductions, i.e., ignore phrases or allow mid-phrase amalgamations. 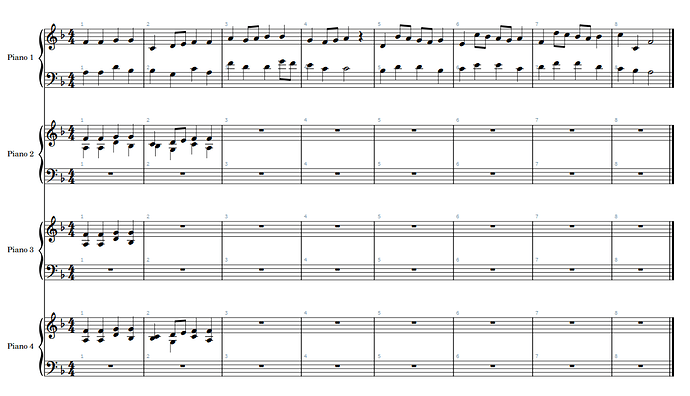 You start with two voices on two staves.
If you reduce them onto one staff the two voices are been respected.
It would now need some clever filtering to find the places where both voices differ in rhythm. Then one could exclude the results and make the rest into one voice.
If Dorico could automate this, it would be a nice addition. It would probably need a different name, as it is more than just reducing, like “amalgate”

This came up in the Facebook group recently - the “reduce” function does consolidate material into a single voice when it’s in rhythmic unison, but the rhythmic unison has to be throughout the selection. The manual currently doesn’t specify that so it’s on my list to add. But basically, a bit like how condensing goes phrase-by-phrase, reduce does too - so if you selected just bar 1 and reduced it, it would have ended up in a single voice. But because this whole phrase includes some beats where the 2 staves have different rhythms, overall the phrase was reduced into 2 voices.

You can either reduce in sections according to where the staves are/aren’t in rhythmic unison, or change voices afterwards.

I’m glad to hear this issue is being discussed. I understand why condensing and reductions are done phrase-by-phrase especially if you’re combining multiple instruments. However, with keyboard reductions, I’ve almost always seen that rhythmic unisons are reduced into one voice. There really isn’t any advantage to showing multiple voices in a piano score, for instance, unless the notes aren’t in rhythmic unison. I think, though, this behavior may be unique to keyboard instruments.

You mentioned to move all parts to the same voice, which is something I had also previously tried. The result looks great for notes that are rhythmical unison but not so great for the others.

I sense the current implementation is the result of programming challenges more than a misinterpretation of current practice and that producing an ideal reduction may need to wait for more pressing features to be implemented first.

There really isn’t any advantage to showing multiple voices in a piano score, for instance, unless the notes aren’t in rhythmic unison. I think, though, this behavior may be unique to keyboard instruments.

Depends on which keyboardist you ask. I use joint stems where I can in hymnody, however for longer polyphonic works I generally prefer independent stems throughout so voice leading is clearer. That said, I’m an organist, so I’m used to independent voices by nature. More contemporary style pianists would likely balk at my baroque proclivities, however.

If it ain’t baroque, don’t fix it!

Yes, changing notes into the same voice after using the “reduce” function should be used only on the sections in rhythmic unison. It’s up to you to make a judgement about when/where to unify the voices.

The current “reduce” tool doesn’t “make an automatic piano reduction” - it reduces the music you give it onto the staves you tell it to. That could be onto the 2 staves for a piano reduction, or e.g. 8 horns down to 4. Some thoughtful input is required from the user still, I think it’s fair to say.

The current “reduce” tool doesn’t “make an automatic piano reduction” - it reduces the music you give it onto the staves you tell it to. . Some thoughtful input is required from the user still,

Well, quite. Any decent piano reduction needs to be playable by human hands, above all. It needs to deal with things like voices crossing the same note, and still convey a ‘sense’ of the instruments, within these limitations. It’s not just squishing everything onto two staves.

We all know this, of course.