CONDENSING QUESTION:
Is there any way to get Dorico 3.5 to combine un-crossed voices (amalgamation) whenever the rhythm is the same without introducing 1000’s of condensing changes?
For example, this slice (bassoon in bass clef) has no less than SEVEN manually-input condensing changes in it(!!) - one for each time the two parts change to or from different rhythms. I feel like there’s just GOT to be a better way of doing this…

I don’t think so. Dorico only makes one condensing decision per phrase, where a phrase is basically defined as the stuff between two rests. If there are no rests, Dorico can only make one decision.

I have the same problem. I guess the question I have is – Will there be further refinement of Dorico’s condensing feature in upcoming versions? The way it stands now, I’m less than happy with the results I am getting.

I’m sure it is safe to say that Condensing will continue to evolve, though at what speed depends on the Dorico Roadmap and other priorities known only to the Team.

In general you should find that proided you have ‘Mid-phrase unison approach’ set to ‘Allow mid-phrase unisons’, Dorico will consolidate chords into a single voice where there is rhythmic unison. If that’s not happening, it would be easier to tell you why if you could attach the project itself, or an excerpt from it that reproduces the problem, so that we can look at it directly. Screenshots don’t provide enough context to know why Dorico is doing what it’s doing.

I thought I’d throw this passage into Dorico. With factory Notation Options I managed to achieve the same result with three Condensing Changes (and given the only thing ticked in each Condensing Change is the Bassoon 1, Bassoon 2 checkbox, it’s pretty easy to Alt-click them in Write mode). 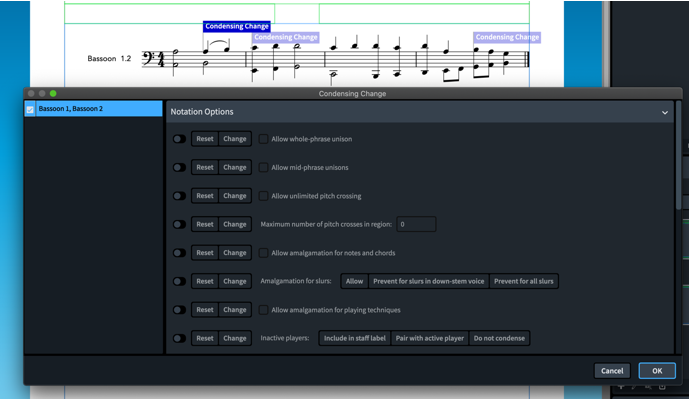 The presence of the slur in the first bar causes most of the problems, by the looks of things.
condensedbassoons.dorico.zip (382 KB)

In general you should find that proided you have ‘Mid-phrase unison approach’ set to ‘Allow mid-phrase unisons’, Dorico will consolidate chords into a single voice where there is rhythmic unison. If that’s not happening, it would be easier to tell you why if you could attach the project itself, or an excerpt from it that reproduces the problem, so that we can look at it directly. Screenshots don’t provide enough context to know why Dorico is doing what it’s doing.

I did make sure I have “allow mid-phrase unison,” AND “amalgamate chords” as well (or whatever that option is - I’m sorry I can’t remember)l. Here - have a look. My first problem begins at bar 10, with bassoons and horns 3 and 4. Another clearer example is trombones in 13 and 14.
Way Too many condensing problems as with gladness.zip (1.21 MB)

It would be nice to be able to adjust vertical position of rests in condensed passages.

Thanks for attaching your project, Arron. Your problems are exacerbated by the very long phrases: in Dorico’s terms, at least, for the purposes of condensing Dorico will treat all notes without encountering a rest as a single phrase, so for example in the bassoon parts, bars 5 to 23 are a single phrase in bassoon 2 and two phrases in bassoon 1, but because overlapping phrases end up being consolidated, you end up with an 18-bar phrase. (Perhaps your bassoonists might appreciate the odd further rest!) Dorico sets the maximum condensation for the whole phrase. You should hopefully find that adding condensation changes with the bassoon group activated but no other changes in the dialog will get closer to the desired result. Leo’s quite right that the slurs also prevent more amalgamation: Dorico will only allow amalgamation if the slurs are in the same rhythmic positions and the same duration in all of the players being condensed, which is occasionally the case but not very often when you have phrases of 18+ bars in duration.

Bruce, I’ve spent a good hour or more looking at your project and so far I’m unable to completely explain the results you’re getting. One thing that certainly doesn’t help is that your condensing notation options are set to disallow amalgamation of slurs, which is at least one reason why e.g. at letter C the oboes and clarinets won’t condense, but in fact even changing that setting isn’t sufficient. In your project, for reasons I can’t quite fathom, the presence of the continuation of the oboe 1/clarinet 1 phrase for four more bars is what prevents the amalgamation, but if you copy and paste that passage into another project with (so far as I can see) identical notation options, those bars amalgamate exactly as you want, without the need for even a single condensing change. In your project itself, however, I find it necessary to create a condensing change that specifies manual condensing for the oboes and clarinets so that both instruments are assigned to a single up-stem voice. I don’t have any more time to look into this right now, but I’ll keep this project to hand and I’ll try to dig some more into it at a later date, time allowing.

Thanks, Daniel. Appreciate your time and trouble.

Thank you!! I’ll see what I can do to improve things.