an idea for music writers ??

If you want to redo a lot of handwritten notes you often work with two monitors. Would it be a good idea, just like a video window to watch a PDF window “in the program window of Dorico” to protect the eyes, from the constant back and forth ??? When the screen is split Dorico functions are visually lost.
Maybe too stupid or ??
Eggi

I’m not sure I understand. Do you mean to include a pdf viewer window in Dorico? For me, it’s pretty easy to toggle (on Mac) between Preview and Dorico, using the Command-Tab keyboard shortcut.

I think, preview does not work (on PC) in the Dorico window. I would have the window directly above the staff being edited.
Eggi

One thing you could do is to take a screenshot of the PDF (or just one system of it), save graphic to a file and add that to the page so that you can see it directly above the stave in Dorico.

I often do this, especially when I’m just on the laptop, but it’s seriously as easy as overlaying the two apps, setting up equivalent zoom levels and Alt-tabbing…

Thanks for the suggestion. I have already tried different ways. As you know, time is money. If a publisher sends you 800 pages of manuscripts, you’re grateful for any work assistance.

I quite often work with a PDF on one side of the screen and Dorico underneath, like this: 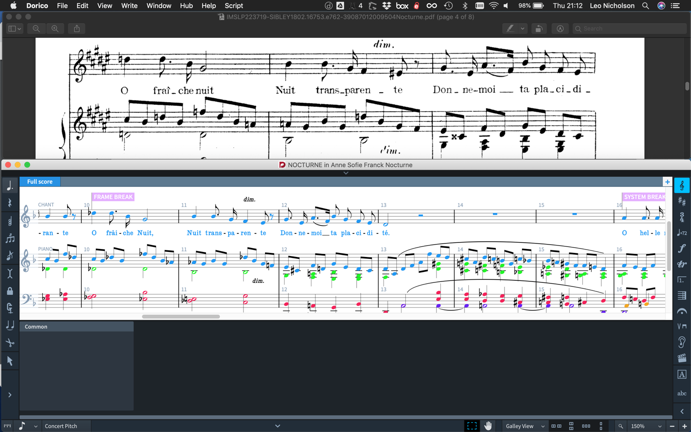 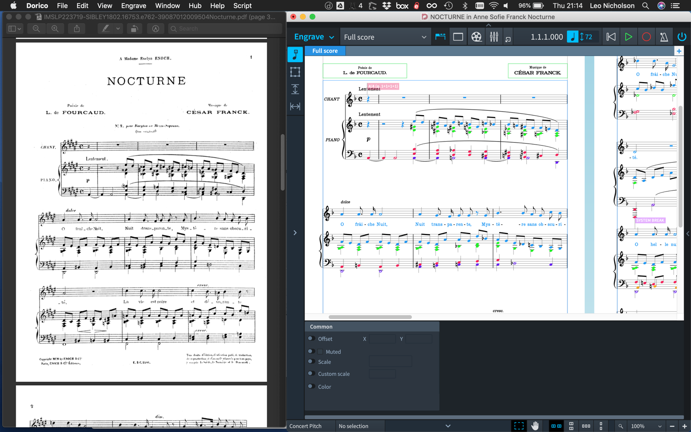 Right now I’ve only got a 13" laptop screen in front of me, and there’s nothing within Dorico that I can’t access should I need to. I very rarely touch the right panel during the copying stage, and the bottom panel is toggled off unless I’m actively using it.

In a fixed (studio/office) setup ideally I’d have two monitors for this, positioned ergonomically in such a way that I never have to turn my head any distance. My reality is generally a 15" laptop perched on top of an 88-key keyboard, with an external keyboard and mouse and an iPad Pro (12.9") as a second display. If I’m copying from A4-ish, the iPad’s portrait. If I’m copying A3-ish then I work with the iPad landscape, with either the top half or the bottom half of the page in front of me. 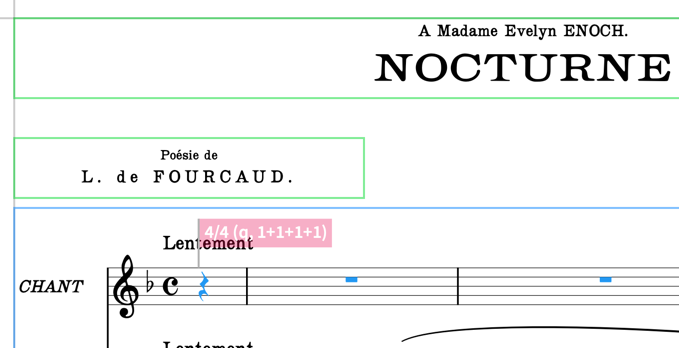 The one for the lyrics, yes!

Ah, so it is Jawher’s! In the smaller screenshot, it seemed like the wear was due to the artifacts from the low resolution, and I thought you might’ve been using a more contemporary alternative (I’m yet to stumble on the perfect Clarendon, something with the same vibe but that doesn’t immediately scream 19th-c Durand!). But yes, Jawher’s is absolutely gorgeous, and perfect for this. I’m a sucker for these kinds of projects.

I used to print and work from from a bookstand. Now the iPad on a mic stand makes this easy. And that font is really nice!