And... still another POOF!

A pattern seems to be developing. Which BLOWS…

I do not have this issue but maybe I misunderstand your description. How do you open “next project” as there is no open project? Can you rephrase that?

I don’t have your issue, but I have had something similar and my crash logs looked identical to yours. I was suffering problems on closing Cubase after closing projects. It would crash, losing my export settings and Recent Projects list etc. Also invoking the warning screen on rebooting Cubase.

After talking to Waves support, we tried clearing out all Waves and re-installing (it happened around the time I updated NX Mixroom to v12). The problem returned after a day or two and by the way I wasn’t using NX in the projects I was on at the time, but it still showed up in the logs.

It was worse when Cubase had been running a while, but each time I re installed Waves, it seemed to buy me a couple of days and then return. Waves support linked to my computer and spent significant time trying to work it out, but were still mystified and eventually suggested perhaps a “graphics issue”.

I then started to look for other causes and combinations and as a trial, I turned off HiDPI (as my two screens were both running at standard setting anyway). I have not had the problem now for several weeks.

I did change my graphics card and uprated from two to three screens, which is great! But probably not relevant as it was much more recently.

So. I am hoping it is sorted and was caused by some weird interaction of opengl32, Waves plugs which use openGL, possibly Softube Console 1 (also uses openGL) and HiDPI. I think the NX reference is just a symptom, not a cause.

The whole story is here: Is C11 crashing on exit?

This all may be a bum steer, but I hope it helps you.

I simply meant ‘the next project I want to work on today.’

@Johnny_Moneto well the title also could be a bit more descriptive to facilitate the ppl willing to help.
Like for example: “Crash after closing all projects and opening a new one”.

POOF! is a perfectly good term of art. Especially since I coined it in 2003.

It means that the program simply disappears. POOF! No error message. Just -gone-. Sometimes it leaves a log. Sometimes not.

IMO it deserves this special designation because it’s so horrifying. You’re working away and … POOF! That should -never- tolerable. And since SB already knows about it, it deserves a hotfix… not even waiting for a scheduled bug fix.

Yes you are very right in fact the forum would look much better with these titles: 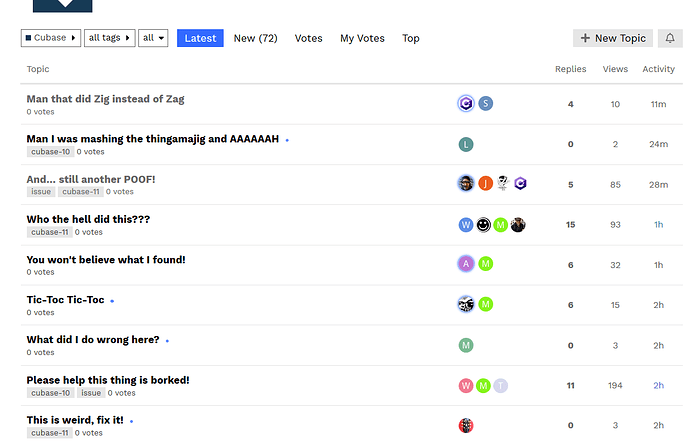 Nobody appreciates the effort of a public shaming more than me… but I stand by the post. It’s not for -you-, it’s for SB. And trust me… they know what POOF! means. And Martin has repeatedly posted here that I’m re-reporting the same bug. I just do it for thoroughness… and to encourage SB to post a hotfix.

Again: a POOF! is simply intolerable, IMO. It means there is a potential for loss of yer project because it might be unmanaged.

I’ve never had a POOF, in fact out of all the DAWs Cubase has been the best at letting me save while it’s experiencing a crash or problem.

Are you on Mac or WIndows, I can’t remember

@LoveGames He is on Windows,
@suntower Your dmp file has the same error @Parrotspain have you tried to update your graphic card drivers and (if applicable) to turn off hiDPI?

Also there is another weird thing and it is that if have closed all the other projects as you said, there are a still plugins instances from your machine that seem to be unloaded (which maybe should not be the case?)

Nobody appreciates the effort of a public shaming more than me… but I stand by the post. It’s not for -you-, it’s for SB. And trust me… they know what POOF! means. And Martin has repeatedly posted here that I’m re-reporting the same bug. I just do it for thoroughness… and to encourage SB to post a hotfix.

Again: a POOF! is simply intolerable, IMO. It means there is a potential for loss of yer project because it might be unmanaged.

Also to respond to your previous message (since we are here) being a programmer myself as primary job I 10000% agree with you that a CRASH is totally unacceptable, it is the total failure of your work when you code something and there is no excuse for it.

BUT it would be entirely SB fault if you were using a vanilla version of Cubase.
All the other plugins contribute as well to crash the program and SB has no source code for that, and other users do not have the same crash maybe because they do not have your same configuration or list of plugin or video drivers.
So yeah pretty unacceptable but perhaps not so immediate to find what’s the cause.
On the other end, if the problem was already found and SB is waiting for something more substantial to release a cumulative patch, well this sucks…

@LoveGames. My problem hasn’t recurred in several weeks, since turning HiDPi off and re-installing Waves - see the thread I posted a link to. I do have a slight problem having changed to a three monitor set up, but that is caused by the NVidia Control Panel screwing up. As Suntower says, things were going POOF. I think I have it stable now.

A pattern seems to be developing. Which BLOWS…

I’m sorry to inform you, it’s the very same crash, you have with Cubase 11 at several different places, again.

I’m sorry, you cannot get all informations from the DMP files, because it is coded.

Could you please check the event log for display related issues and find out if it correlates with the time of the crash? 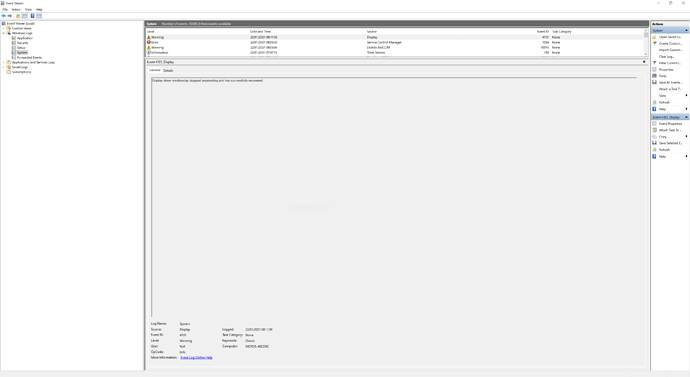 Hi. Sorry, doesn’t ring any bells. It was too long ago now for my old head.

I too have experienced Poofs.* But poofs are so rare with me I haven’t had the motivation to figurine out a cause… Poofs have been happening for several Cubase versions. Thank goodness I have auto back up on short intervals. I couldn’t even say if the poof happens when I am executing a function, just moving the mouse or a poof happens when I’m not even near the PC.

I will say that I don’t think opening/closing a .cpr has caused this because I don’t open or close multiple .cprs. I tend to close Cubase completely before opening another project. I just don’t like opening/ and closing multiple .cprs because I always fear something didn’t work out correct vs. closing then re-opening Cubase.

Proclaiming the above, I just now experienced a Poof.

I had a project open. 10,347kb size. not much RAM. usage. I used Import>tracks from project. I began to navigate to the drive I thought my project was located, but accidentally clicked on my drive D which is my DVD drive. The moment I clicked on the DVD drive, I got the poof…Cubase gone.