I need an arpeggio sign on a grace note chord, is it possible?

You have to attach it to the note or chord following the grace note, then switch on the “Arpeggio before grace notes” property and adjust the length as necessary. 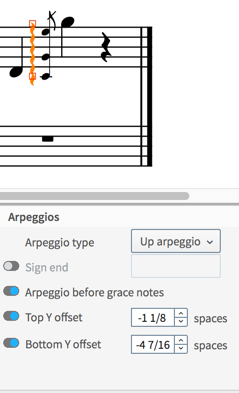 Thanks, but the following note is a rest. And yes, this isn’t common notation, but the composer requests just this. I found an ugly workaround with a hidden second voice (hidden stem and blank notehead created with the notehead set editor).

I’m thinking that a grace note to a rest is incorrect notation. A grace note, by it’s very nature, applies to the note(s) that follow. Unless this is an interrupted pattern, what is the purpose of a grace note to a rest? I’m really intrigued by this. Are you at liberty to share a screen grab? (And I accept this is what the composer calls for. I’m just really curious to see it implemented.)

In a keyboard part, how would you notate a fistful of grace notes in the right hand, followed by the main note four octaves lower in the left hand, except by “grace notes before a rest”? Putting it all on one staff with a clef change between the grace notes and the main note wouldn’t make it any nicer to read.

In that extreme case I’d enter the note in the proper stave, apply the grace notes and properties, and then use the n/m commands to move the note to a better stave for ease of reading.

I think notation is a work of progress, so to say this is correct and that is incorrect is not the right way. Modern composers are forced to expand the notation rules. Attached a little example with grace notes before a rest.

Hello UMahnken… RE: Inline pictures
I had the same question about inline pictures and found this discussion https://www.steinberg.net/forums/viewtopic.php?f=132&t=138980&p=747826&hilit=picture+inline#p747826

This makes more sense. Pickup to a tuplet where the first note is silent. Interesting. Looks dastardly difficult! Thanks for sharing the example. Learn new things everyday!

Another workaround would be:

Quite laborious, but it works.

P.S. I know several examples of grace notes related to a following rest. Especially in modern music these grace notes have a certain gestural moment which can hardly be expressed in another way. It’s sort of a stressed micro-upbeat after which you expect something big that doesn’t come. The expression oft these gestures results from the discrepancy between expectation (the grace note) and disappointment (the rest). That’s why I think it would be great if grace notes could have the same properties as regular notes.