Hi!
I’m not sure, if there’s a way to customize the frets on artificial harmonics for guitar (in my case ukulele) notation. The situation is, that I’m combining harmonics on the 2nd partial with one harmonic on the 3rd partial, which then is to be played at the same fret as one of the 2nd partials. Dorico writes it mirrored by the 12th fret. Is there a way to change which number appears in brackets after the root note? 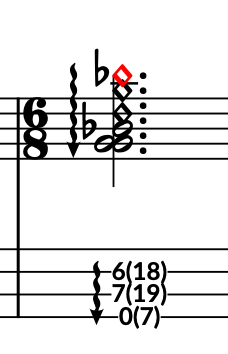 In this example, I’d like to change the 7 for a 19.
Any help greatly appreciated!
Elisabeth

Does changing the string and/or partial for these harmonics allow you to get the right result?

I think what you want is something like the attached. If you make the D a natural harmonic rather than an artificial harmonic, then you can use the “Node” property to choose the touch point.
uke chord.dorico (510.6 KB)

hm, I see. But the information that the harmonic is on the open string (0) is important. Technically it is a natural harmonic, but it’s played like an artificial one.

I’m afraid we don’t currently support the use of the “Node” property on artificial harmonics. It is something that has been requested before so we would like to add it in a future version, but I don’t know when that would be.

I see. Thanks for getting back to me so quickly anyways.