I found another post here where they fixed it by copying over the RAMPresets.xml file from an older install, but my copy of 10.5 has also lost all my presets!

When I open RAMPresets.xml in a text editor, I can see my preset names in there. But even if I delete the existing file and replace it with the RAMPresets.xml with my presets in it, Cubase does not see them.

Has anyone experienced this? Any ideas?

I’ve never had that happen

Pardon me! I thought I had my setup in my signature, which doesn’t appear to have survived the new forum theme!

I cannot think of any significant changes lately, and that 2018 preset predates the Focusrite. I’ll try a full reboot and see if that helps, thanks.

Darn. No, I’m afraid it’s still the same. Even with powering-down.

was worth a try !

can you see all the usual inputs/outputs in the audio connection manager ?
is the correct driver selected in the studio setup preferences ?

100% for sure, my correct interface is showing up in Control Room, Studio Setup, etc. My external hardware is even set up correctly.

The only thing that was weird today was that I was trying to preview a loop in the Media Right Zone, and I couldn’t hear it. I opened Audio Connections, and my assignments were wrong (like the main outs were set to Output 1 & Output 3). Then I noticed my presets were gone when I tried to restore to my safe-default.

without any real evidence whatsoever (!) I think cubase thinks the interface has changed in some way - hence the screwy assignments - and being unable to load the old presets…just guessing obviously.

I think it’s probably best to file under “unknown” and recreate what you can ?

That’s a fair assertion. Personally, I think it’s scrambled its preferences a bit, like it can’t read the xml file correctly. But…who can say?

maybe - but it would load the old .xml file from the earlier version ?

Yes, I tried copying the xml files from my 10.5 backup, and…no change! Mr. President…(sorry, I can go all night on Strangelove references, haha)

I am having essentially same problem, first occurred about a week ago. 10pro on Windows 10. All my studio connections presets are gone. I was unable to restore them, so I created new connections and saved a preset. Next day, that was gone too. Had one-time message from windows OS saying “PFN error”

Just wanted to share my solution for this. I was also saving Presets in the various tabs of the Audio Connections window (Cubase 12 on MacOS 10.15), only to find the presets missing after quitting and re-opening Cubase 12.

I discovered that removing old Cubase version folders in the

Hey, thanks for this update. 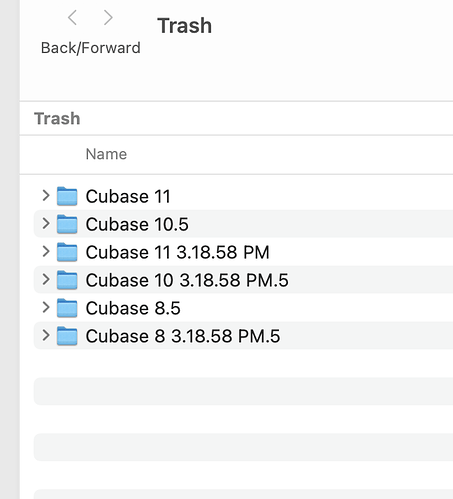 Of course I’d always recommend either (a) keeping them in Trash, or (b) having a backup of them elsewhere (e.g. a Time Machine backup of your drive) so that you can restore if necessary.

unfortunately i have the same issue with Cubase12 and only control room settings. I lost all of my custom presets ! I am a CU12 Win10 user! This issue drives my crazy and it keeps getting crazier because i cannot figure out when and why it is happening.

I agree. This is ridiculous.

HI Iam new to Cubase so have only been using the latest version over the past two months.

I am having the same issue with my control room settings and plugins disappearing which is getting to be chore.
Its a shame as everything else has been an absolute joy since moving over to Cubase.
PC, Windows 10, Cubase 12