When using the Function " Backup Project" - the Pool Settings do not update “record path” to "New Location.(Audio Folder)

“Audio record path” is not updated to the new location. and any recorded or bounced audio goes to wrong Audio Folder in Wrong Project Folder.

Ive Just realized that this Function is not that Smart, … its just a Generic backup to folder type thing,

am I getting confused with , " Move project to new location …" ? Type Function .

update: the option to “keep project active” resolves my concerns. Thanks.

I reported this in Cubase 8 cycle (I think). Still get this issue.
The workaround for it to work as expected is to fully shut down Cubase after the backup.
The new file location doesn’t get updated until Cubase reloads the project (in a fresh Cubase instance).

It seems, that if you don’t do the above immediately after the backup, the old location persists, even if you close the project but keep Cubase open, or, continue to work on your project and then save (which I have done many times, and lost files because of it).

A simple solution which SB seems to avoid is to allow for the manual changing of project location. That would be ideal IMHO.

When using the Function " Backup Project" - the Pool Settings do not update “record path” to "New Location.(Audio Folder)

“Audio record path” is not updated to the new location. and any recorded or bounced audio goes to wrong Audio Folder in Wrong Project Folder.

This happens if you have the ‘Keep current project active’ option enabled. With this option active, you are effectively working on the original project, not the backup, thus the path remains unchanged.

If you uncheck that option, you work on the backup project: in this case the project path is updated. Screen-caps attached.

The project (default My Documents path) was backed up to an empty folder (Desktop) with the options set according to the attachment ‘options’.
The ‘original’ pic shows the original project’s path, ‘backup_not_active’ shows the backed up project path after completing the backup. ‘new_audio_recording’ shows a newly recorded event immediately after the backup: Cubase was not restarted and the project was not closed.

[EDIT @beerbong: I can’t remember exactly at the moment, but there was an issue in that area in C8 or 8.5, so if you want to try that, please make sure the project is fully backed up elsewhere, or even better use a test project] 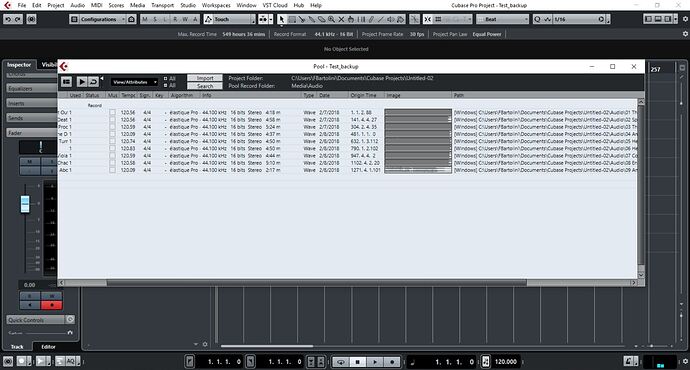 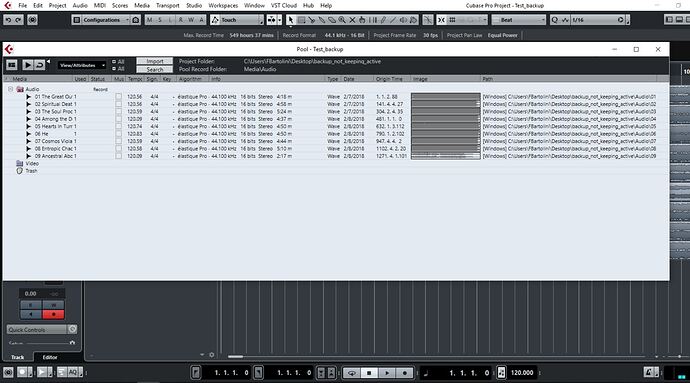 I remember this coming up shortly after the release of Cubase 9, and at that time I did some careful testing and could not reproduce the issue. I believe there is some confusion amongst users about how the function is designed to work compared to the behaviour in earlier versions.