I think John Barron in his last video shows the option to make it 3, but I might as well be mistaken.

John B mentions three-bars in the measure-repeats section, but he does not show how to do it, and the properties do not give the option for a three-measure repeat. So I think he may have meant that one could have the repeat measures counted off at three-measure intervals.

If I am wrong, I really hope John will show how to do it (although in my case, this is just idle curiosity speaking).

How about p27 in the version history ?

Nice one Marc, but you have to link to it or someone grumbles they can’t find it

I still don’t see how to start a 4-measure repeat with a three-measure repeat even after checking the Engrave Option.
(I don’t know why I care, since I’ll never use this; but I’d still like to know how. Ego, perhaps.)

It’s not a four-bar repeat: it’s a one bar repeat, grouped into fours, and then with the first incomplete group of three bars shown as a three-bar repeat. See page 27 in the Version History document.

Okay, I got it to work (more or less stumbled on it, actually). I had read p 27, but apparently the order in which one does things has an effect.
Thanks, everyone, for your patience.

Daniel - Any chance of getting a three bar repeat? %3?

I’d be interested to hear more about the situations in which you’d like to use a three-bar repeat. We didn’t add it because we’ve never come across it in any literature and it seems like a recipe for confusion, but I’m open to persuasion!

Would be great to have a three bar repeat for a piece I’m doing now, which is based on a repetitive three bar pattern. It would save a lot of space in some of the parts (especially the drum part) and make it much clearer. But it’s quite exceptional I guess, doesn’t happen all that often…

5 bar repeat, 7 bar repeat and so on would be nice.

How is that a standard? I have never seen this notation… It’s rather unlikely that the devs implement such a thing, but who knows…

One and 2 bar repeats, properly used, are standard. Anything else is bogus notation. Refer to Clinton Roemer “The Art of Music Copying” for examples of clear, professional layouts.

Dave Holland starts Prime Directive with a three bar groove repeated.
(We have a 12 beat feel going on here and he as chosen to write it as three bars of 4/4)
Thus a %3 bar repeat would communicate his intentions immediately and clearly. (That’s why I came across this, assuming I could do %n instead of the way he’s written it out longhand)

Drums, Trombone, Bass parts each have this same rhythmic pattern. 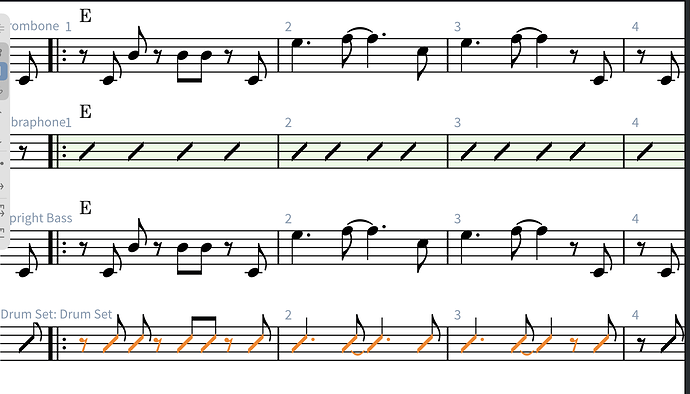 It’s easy enough to find examples of music with 3-bar repeating patterns, and other lengths besides 1, 2, & 4. And of course Dorico’s interface already suggests a way to enter them in a popover. But the question is How can this be notated clearly?? I think in order to implement this the Team will need published examples. I have yet to see one.

’d be interested to hear more about the situations in which you’d like to use a three-bar repeat. We didn’t add it because we’ve never come across it in any literature and it seems like a recipe for confusion, but I’m open to persuasion!

Given that there are works where the bars are grouped in threes (parts of Beethoven IX Scherzo and Dukas’ L’apprenti sorcier, etc) I can well imagine that three bar repeats might be useful on occasion.

just been commissioned to write a series of percussion ensemble pieces. Full of repeating 3 and 5 bar patterns. Score space on stands is a real issue in the set up. Three and five bar repeats much needed.

Can you show an example of how would you write these?

Roemer has an example of 3-bar repeats in “The Art of Music Copying.” 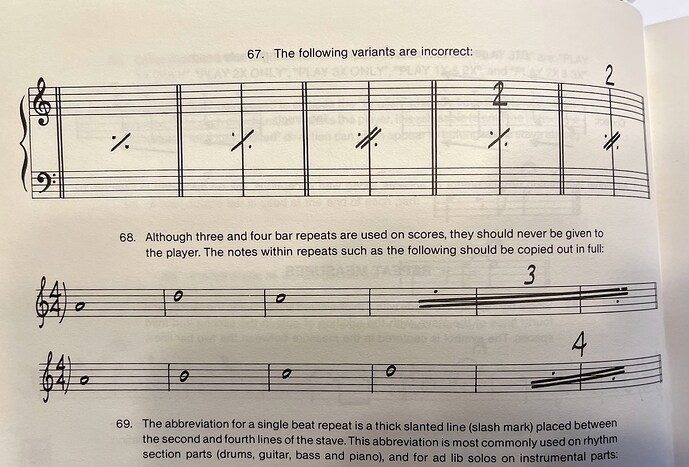 I honestly would always write this out to avoid confusion, but if implemented I guess that’s one way to do it. It’s certainly easy enough to find 3-bar grooves in jazz anyway. In addition to the Dave Holland example above, the bass line on the vamp on Freddie’s One of a Kind or Branford’s Citizen Tain are both 3-bars.