Okay, now we’re talking, thanks, Fred. I have seen very long slashes like these in classical manuscripts – not, of course, standardized. Now let’s agree, as I said, it’s easy to think of examples of music where this is useful. But my main concern is that we have a notation that won’t be mistaken for any other meaning. (For ex. we can’t just draw “3” with the small % symbol on the middle of a group of 3 bars because the bar grouping is not clear, etc., etc.)

Interesting that Roemer says don’t write these in parts! A few months ago I did score and parts for medium size orchestra that included 2- and 4-bar repeats for some players. I think in order to effectively campaign for this feature, we have to convince the Team of 1) a robust notation style, and 2) a reasonable standard usage.

Interesting that Roemer says don’t write these in parts!

Yeah, I usually have the opposite opinion of bar repeats. I sometimes wish there was an easy way to write them out in full in the score and have them only appear in the parts. I’m not sure I’m joining the campaign to have these implemented as I don’t think I ever want to see a 3-bar repeat, but I did want to point out Roemer at least endorses them. More options and flexibility are better I guess.

I use 3 and 5 bar repeats all the time and often see them in pieces I play.
I’d love to see this implemented.

Add me as another jazz composer who uses 3 bar repeats often. They seem no less logical or more problematic to me.

They seem no less logical or more problematic to me.

It seems to me the real issue here is that there is no established and generally recognized symbology for anything other than 1-bar and 2-bar repeats. But if there could be some consensus on how it should appear, I don’t see why it should not be included. Gould addresses only 1- and 2-bar. The 2-bar symbol is easy to recognize because it has 2 diagonal slashes and the symbol lies over a barline. That is reliable to read accurately, but extending that system would be visually unacceptable, IMHO.
Fred shows suggestions from Roemer that might be more clear, but certainly are not widely recognized, so an explanation would be required. One of the problems with putting a “3” or “4” above the symbol to indicate a 3- or 4-bar repeat is that can be confused with a repetition counter. If the number is large enough, as in the Boemer example, it is unlikely to be mistaken for a repetition counter.

And as the Roemer example says “[3 or 4 repeats] are used in the score, but they should never be given to the player”. AFIK it remains impossible to have bar repeats showing in score, but not in parts (or vice versa…)

they should never be given to the player.

The symbology would be pretty obvious in the context of the score. It seems to me the world needs a suitable glyph that would be clear in parts. Dorico supports a 4-bar repeat. It displays 4 measures. In the center is a modified glyph that is like the 2-bar glyph but has 4 slashes. I think that’s not ideal. But such as it is, why not offer the equivalent 3-bar variant?

When parts of Scherzos (e.g. Beethoven IX, Tschaikowsky II, L’apprenti sorcier) are written in three bar periods, why is it forbidden to reflect this in the orchestral parts?

Seems to me, something like this would be self-evident:

Taking that example, then how should a score handle barlines? This represents 3 bars with only 1 barline, perhaps confusing. Or, if we do have 3 barlines, should the 3% glyphs be drawn in the center, at the beginning, or … ? Should the % glyph have 3 strokes? All these questions and more will have to be settled.

“2%” is much easier to make unmistakable because it straddles the middle barline. Sorry if I seem argumentative; I’m trying to be constructive.

I agree about the barline on 2-bar repeats. After that, I think the barlines just make a mess on parts. I’d rather not display barlines on parts for 3- and 4-bar repeats. I’d have to see it on a score. Maybe barlines make more sense in the context of a score.

Most of the musical conventions in use today were born of the limits of what could be done easily and quickly engraving on metal plates. Considering that virtually all engraving today is done electronically, we should be open to using graphical nuances that are easy for the computer to accomplish, but might have been burdensome to a metal plate engraver. An example in this case is the superimposition of the “3” upon the repeat glyph, and the masking of barlines and staff lines to make the “3” easier to read quickly. And by placing it within the repeat glyph itself, the meaning becomes obvious.

I just quickly flipped through about 35 notation manuals and style guides (I sorta collect these), and the Roemer example I posted above is the only one I found that has an example of this. Ken Williams and Read both have examples using “bis” which I imagine would be pretty unfamiliar to most modern musicians. 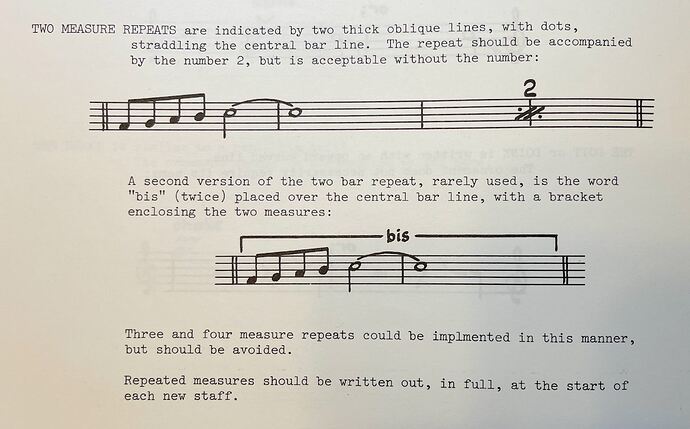 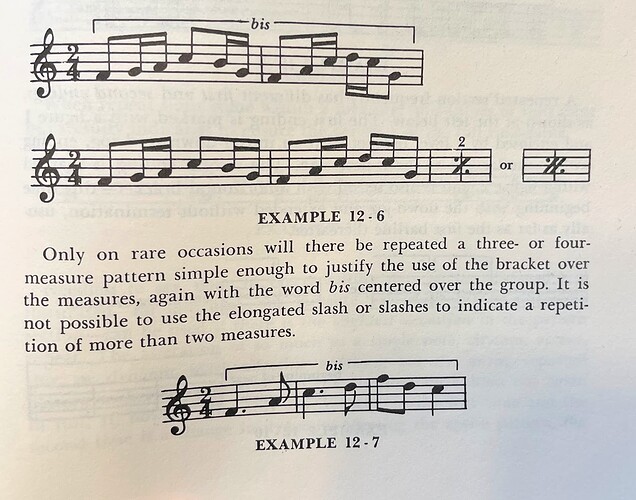 Does anyone have an example of this, either a 3-bar repeat or “bis” over 3 bars, in use?

I, too, am notating a repetitive three-bar phrase and would love a three-bar repeat, which brought me to this thread. I can’t speak on whether it’s “correct” or nice to look at, but I don’t think groups of 1 (which is my only other option) looks any better.

Welcome to the forum! What do you want it to look like? One of the issues pointed out earlier is that there’s no consensus on how this should actually look. If you were a hand copyist, how would you do it? Post an image and we can see if there’s a way to accomplish it.

It’s a PITA, but using a custom line, I can come up with this:

The blank bars make this not very clear at all IMO. Dorico doesn’t have invisible barlines, but if I use dashed barlines with the dash set to 0, I can get this:

Maybe that’s the clearest, but it’s super hacky and only works for a single staff project, as I don’t think there’s an easy way to have dashed barlines in some staves, but regular in others.

I don’t think there’s an easy way to have dashed barlines in some staves, but regular in others.

If you give the relevant staves an independent time signature, they can have independent barlines.

If nothing else, that example shows that a 3-bar repeat is every bit as valid as a 2-bar or 4-bar repeat, even though a 3-bar grouping doesn’t occur as often.
That begs the question how far should it go. I would think a 7-bar repeat would be quite messy in the score as the repeat block would often span pages. And it might be confusing for the musician to have to count back 7 measures. To be clear, there would need to be double bars, brackets or some visual indication of the grouping. I think 7 is asking for trouble. But would 5 be valid?

Thank you, Lillie! – and Fred for illustrating. This solution has several advantages:

I note that in a score the longer bar is not automatically kept together on a system as multi-bar repeats are, i.e. the system can break at any main barline – which seems like another advantage, at least for flexible layout. But when that happens the symbol is repeated on the next system, so that’s not good. If there is a way to suppress that, I haven’t found it yet.

*—I find when I assign the line to span from one downbeat to the next, the annotation is slightly to the right of center, of course. Easy to compensate for that by shortening the line by an eighth note.

I find when I assign the line to span from one downbeat to the next, the annotation is slightly to the right of center, of course. Easy to compensate for that by shortening the line by an eighth note.

Do you have “attach to barline” set for the line? It should remain centered if attached to the barlines.

Excellent. So then the only issue to me is the repetition of the symbol on continuation. (Can solve that with system breaks, but it’d be nice not to have to keep the 3 bars together in a score.)

@cparmerlee I do think for a repeat of more than 4 bars you’d need to bracket the original, as in the bis examples above.