I have noticed this on multiple projects. I have only recently begun using condensed scores, and this problem comes up on almost every one. Mostly the spacing is sensible, but there are cases where Dorico puts systems too close together – sometimes even overlapping. In the example below, they aren’t quite overlapped, but obviously way too tight. 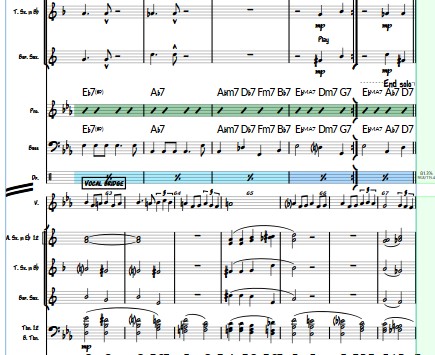 And the real problem is that no matter what I enter for minimum or ideal inter-system gaps, Dorico keeps this same spacing. In this instance, I have entered 20 spaces for both minimum and ideal. The only way I have found around this is to use Engrave mode to shrink the height of the music frame. That forces the lower system onto the next page, but this is surely not the correct behavior.

I never noticed this problem on non-condensed scores

I’ve seen this same issue where it tries to jam condensed scores onto a single page like this, sometimes with the top 3 or 4 staves of the bottom system overlapping with the bottom 3 or 4 staves of the top system. I’m not sure why it does this, but I’ve been having to force manual frame breaks to force the lower system onto the next page. I would recommend doing this rather than shrinking the height of the music frame in engrave mode.

Because Dorico’s casting off is not recursive, there are occasions (rare, one hopes) when this can occur. It is IIRC something that must be manually corrected.

Because Dorico’s casting off is not recursive

Regardless of the question of recursive logic, it seems like the minimum inter-system gap ought to be respected.

The AI cannot calculate that. It can calculate the number of staves allowed vertically, but then, when note positions and dynamics push the staves further apart, it cannot go back and recalculate. That is my understanding from an explanation Daniel once gave, but I do not have time now to search for the actual post.

On the project I’m currently dealing with, when I force a system break, it just moves the intersystem problem to the next page.

The basic gist of the problem is that Dorico has to estimate the height of the system before it knows exactly how much music will fit on the system. It’s only able to calculate the precise position of everything relative to each staff, and thus how many staves can fit on the system, once it is spacing the music. But it also can’t work out the precise interlocking of the systems until it knows how the music is cast off, so there’s a circularity to the problem that is difficult to resolve, algorithmically.

As such, Dorico sometimes ends up with a result that is less than ideal because there’s a larger than expected disparity between the pre-spacing estimate and the real post-spacing calculation, and unfortunately you’re left to pick up the pieces.

Considering it seems there is no improvement expected in this area in the near term, perhaps we might help others by identifying best practices in this thread. As I mentioned, this has generally happened to me on only one page in a condensed score, which might typically consist of 10-20 pages. It has been effective, but probably not the best practice, to use Engrave mode to shorten the music frame on that one page. Generally, if I tweak the height even very slightly, that is enough to cause Dorico to move the last system to the following page and has never resulted in propagating the problem.

Because that quick-and-dirty solution has solved my immediate problem each time, I have not really experimented much with other solutions that might be considered better practice. I have tried inserting frame breaks, but that just propagated the problem to the next page. I assume if I instead selected the exact range of music wanted on the following page, then used “Make Into Frame,” this would have the desired effect without the propagation problem.

Is that the best practice or are there other ideas?

As an aside, all these projects have been big band or combo charts, with the score laid out in portrait mode. I chose portrait mode because that allowed me to do booklet printing on 11x17 paper, which is very easy – just a couple of staples at the fold, and you are done. However, it is more conventional for jazz scores to be laid out in landscape mode on letter-size paper, which requires some binding of the short edge. This layout problem has never hit me when using landscape format, so maybe the very best practice is to buy a binding machine.

If in general you find the proportions and spacing of the music to be pleasing, then I would agree that using Make Into Frame is probably the way forwards.