Bug or misunderstanding in add staff above / below?

I thought maybe it was a misunderstanding but now I think it’s a bug… kind of hard to reproduce though. Sometimes when I click on “add staff above” it doesn’t add a staff above, and clears out the current staff. Here’s a video showing buggy behavior when trying to add a staff above the first two staves, but working when adding one above the third). 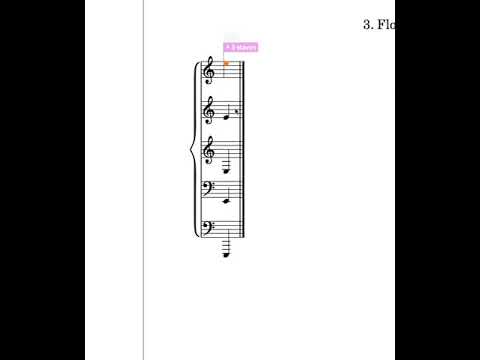 Yes, this is the expected behaviour, though it’s essentially impossible for you to see why as a user. You have to select the main staff (or in the case of e.g. a two-staff instrument instrument, either of the two main staves) and then add the new staff above or below that. We didn’t anticipate that people would be adding more than one or possibly two at most staves to an instrument, so you’re already well beyond what we thought people would be using the feature for. Do you mind me asking why you’re needing to add more than two staves to an instrument, rather than using multiple instruments?

Do you mind me asking why you’re needing to add more than two staves to an instrument, rather than using multiple instruments?

Sure – it’s for writing multiple parts. I don’t necessarily know how many I’m going to have upfront. I’ll write a melody, and then add another staff to write a harmony part or a counter melody. This way I can keep all the writing in a single instrument, and don’t have to add and remove a bunch of piano instruments to different flows.

I should note that I use Dorico exclusively for composing / arranging / orchestrating. So this is purely for enabling my composing workflow, not typing in an existing score.

In my Dorico projects, I have a single piano for writing, and then the instruments used in the score. So I do the writing in the piano, and then copy the parts to individual instruments to orchestrate it.

I’ve tried using multiple voices in a single staff but don’t really like it – I don’t like when stacked notes are offset, it’s hard to see the individual voices, and navigation between notes doesn’t work as I expect. I really like seeing the parts on individual staves, since that’s what they ultimately will become when orchestrated.

My solution up to this point has been to create a section piano part and use divisi, and that has worked pretty well. But when I saw you can add and remove staves, that became a lot more interesting to me.

As an example, say I write a melody and decide that I want to write an even higher part (fluttering flutes or something like that). With “add staff above” I can place that new staff above the main melody and write the part there, without having to cut and paste between staves to arrange them.

I would like to have 8-12 staves in a single instrument if possible, by adding or removing as needed. I realize that’s not typical – but it’s a cool workflow that computers make possible, that isn’t as easy to pull off on paper without some upfront planning / a bunch of rewriting.

You can certainly add 8-12 staves to an instrument, but you’ll need to keep track of which one was the original one, if possible. But I think on balance I’d recommend using multiple instruments: even multiple instruments held by the same player will give you the same advantages, providing you switch of instrument changes in Layout Options so that all of the instruments’ staves appear all the time.

you’ll need to keep track of which one was the original one, if possible

So it seems like the “original one” only matters in the case where the original is the top or bottom staff. You can add a staff above, and then select the highest staff and add one below it, even though it’s not the original.

I’ll give that a shot – but I think it involves a lot of cutting and pasting, which is what I am hoping to avoid.

So for example, I’ve written my melody line, and want to write a part above that. With multiple instruments, I have to select all the notes I want to move down a part, cut them, and paste them into the next staff.

So yes, I can technically accomplish what I want today, by either cutting and pasting parts around, going back to setup and inserting new instruments or whatever…

Whereas “add staff above” is sooooo close to doing exactly what I want – which is adding new staff to the current instrument, above whichever staff I’ve selected.

Just to follow up – I came across moving notes to other staves which mitigates the cutting and pasting, which is good.

I’ve worked with multiple voices, multiple players, multiple instruments per player, and divisi. They all have their issues with what I want to accomplish. Multiple voices get crowded quickly, are hard to keep track of, and the navigation is weird. Multiple players / instruments mean every time I add an instrument it affects other flows. Divisi is pretty close, but is fiddly in that changing the divisi means having to create all the divisions again, plus moving things up and down, changing clefs, etc.

Anyway, I realize this probably won’t change any time soon. But if you’re still paying attention to this thread, maybe you’ll consider some changes down the road.

The basic idea is that I can write a line at a time, and gradually build it up with new lines one at a time. A magically expanding score as I come up with new ideas…

A huge step would be if “add staff above” / below worked all the time, rather than the current behavior. And if I could play only the selected staves, the way you can with selected instruments, I would be all set.

This lives on a single instrument (I’m an 8-handed piano player!

) and then to orchestrate I could copy little chunks and explode them to my other instruments.

Dear pat,
I discover this thread and… it looks to me as if you’re fighting the program instead of working with it. I suppose that when scripting will be updated, it will be as simple as writing a little macro that will automatically go into setup mode, duplicate your instrument and go back into write mode, instead of using “add staff below”, which was implemented for a different purpose. Maybe that kind of macro is achievable with a third party software (it probably is, although I don’t want to try myself on Keyboard Maestro) already, and you don’t have to wait for an update on this field… Could you tell us what platform you’re using (Windows, Mac), so that other Doricians can provide you with a script or a “program” in the appropriate third party software?

I think you’re right. I’d also add that I’m new to Dorico, and so am exploring it and learning its boundaries.

duplicate your instrument and go back into write mode, instead of using “add staff below”, which was implemented for a different purpose

Maybe… although what is that different purpose? I appreciate that the developers understand why it currently behaves how it does. But as a user of the program, when “add staff above” sometimes adds a staff above, and sometimes clears out the current staff, depending on which one you’ve selected – well that is clearly to me a bug, but I’ll be generous and call it “unintuitive.”

Could you tell us what platform you’re using (Windows, Mac), so that other Doricians can provide you with a script or a “program” in the appropriate third party software?

I think that will get unwieldy, it will easily lead to hundreds of instruments in the project. So, a closer version would be to look for an unused instrument above / below the current one and add it to the flow, or insert a new instrument if there are none free.

Okay! I figured something out that works. It involves using two project files – a main project, and a scratch pad.

The scratch pad is where I do the writing – it only has one flow, and has as many instruments as I need. I can add parts, rearrange them, whatever. When I’m done, I import the flow into the main project, reusing existing instruments where possible. This creates a new flow, with only those instruments added to it, and with the parts in the order that I’ve written.

To edit a flow from the main project, I import it into the scratch project, do my edits, and import it back into main.

The only downside I’ve seen so far is waiting for the Dorico audio engine to reload (or whatever it does) when switching between projects. But, it’s a lot simpler than all the other stuff I was trying to do!

p.s. I like writing with piano sounds first, then orchestrating the parts. That’s why it’s so important to me to be able to freely create new parts on the fly. The challenge with doing it in a single project is that those parts are maintained across flows, and things can interact. But with the scratch project, the piano parts in the main project are just a snapshot and I’m not modifying them. I will also try writing directly into the actual instruments, since I can add them to the flow one at a time. That would rid me of the need for back-and-forth with the scratch project… although like I said, I like writing with piano sounds.

Why don’t you set up a “maximum stave” count of instruments, connect them to a single piano-VST and then switch the (still) unneeded staves off in setup mode by unchecking the check boxes? When you start with a simple piano in the middle and add bass clef instruments below and treble clefs above you just have to activate the instruments in your score. It’s one key command for switching to setup mode and a click.