I love the parenthesis for chords. However, I seem to have stumbled on a bug. It was working great for everything until I hit this case pictured below. The final A7 should be followed by a closing parenthesis. 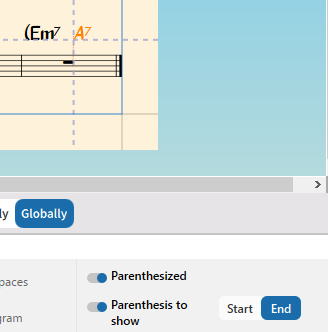 This isn’t a bug, but rather a limitation, unfortunately. Dorico can’t add parentheses automatically to chord symbols with overridden appearances. You could add the parenthesis yourself in Engrave mode, though I know that’s not ideal.

You could add the parenthesis yourself

Are you saying, add the parentheses to all A7 occurrences? That would put the parentheses throughout the music, which would not work. I guess I could create an override for a chord I would otherwise never use and edit that to show as A7)

Is there any chance of releasing a new variation of the font that has a little more breathing room after the “A”?

I think the idea was to use SHIFT+X text to add the parenthesis and then to maneuver it into place in Engrave mode.

use SHIFT+X text to add the parenthesis

Oh, I see. In this case, the A7 chords don’t appear very often, so I just deleted the override. I would like to find a font I can use for the chords that would not require these overrides. Overall the font is great. It is really only the A chords where the suffices are too close to the root chord.

One could edit the kerning in the font. (Any takers?) Or request a tweak from the developer. I agree about the spacing of the 7. It looks like it could use a larger left side bearing generally, rather than just a kerning pair with A.

related to Petaluma A7 chord symbol