Using a very simple, one track (type 0 drum midi event) example, the first screenshot is at the project’s current 75 bpm. To dramatize this oddity, the second one is of the exact same drum event set at 50 bpm. There should be more space between notes @ 50 bpm, not less. It’s essentially increasing MIDI by 15 bpm, not reducing it by 15.

It’s not that for this example I can just mentally calculate that it’s actually 15 bpm less or slower (though once I figure this out, I want the new tempo to be 60 bpm), we’re dealing with whole integers. But if a future project requires odd number decimals - particularly for audio file time warping, it could become a headache.

What is going on and/or what am I not doing right?
Thanks.

Can’t really tell from your screenshots (because the pertinent control is hidden). But most likely you have the Track set to Linear Timebase and not Musical Timebase. The length of the MIDI is probably the same in seconds (not bars & beats) in both screenshots.

Yes, the track was set in Linear when I tested the 75 vs. 50 bpm but at least something happens between the two Tempo track speeds. When setting the track to Musical, nothing changes when at 50 bpm (both the grid and the files/events stay the same).

Also, since I’m at it, it seems odd (or I just don’t know the default settings for this), the Select Primary Time Format for this and all my projects are always in Bars & Beats for I’m not dealing with video/frames, so why are all the tracks not so (in Musical)? Seems I’d have to change each one of them individually which is tedious.

But for this tempo change issue, just that one track set to Musical is not working as it should . Hopefully I’m just missing something obvious.

When setting the track to Musical, nothing changes when at 50 bpm

It only appears that nothing is happening because you are using Bars & Beats as your only timescale - 2 bars at 50 BPM is still 2 bars at 60 BMP, even though one takes longer to play than the other. If you added a second ruler Track and set it to Minutes & Seconds, you’d easily see things changing. A project isn’t in Bars and Beats OR Minutes and Seconds - both are always in effect, although we can choose how we want to view it by changing the Ruler scales.

so why are all the tracks not so (in Musical)? 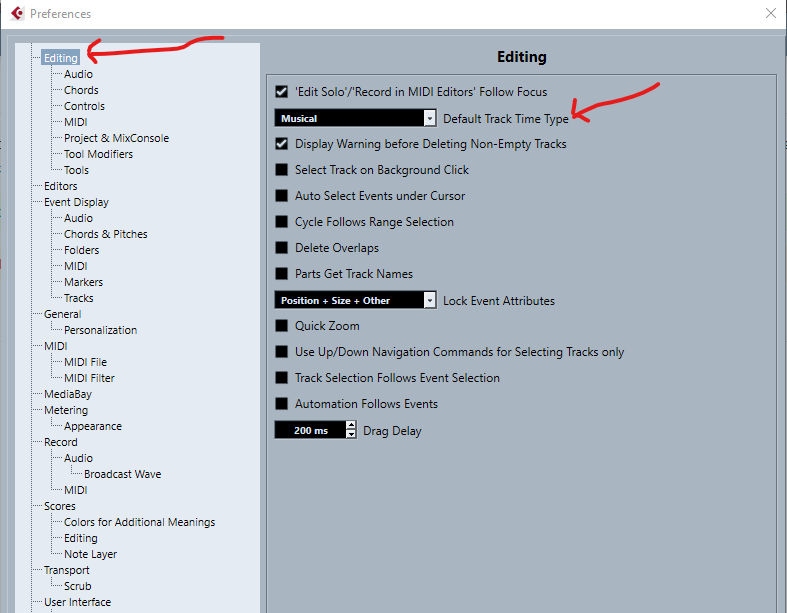 Here’s a rundown about how Bars & Beats interact with Minutes & Seconds for Audio. The info about Timebase applies equally to Audio & MIDI. But the stuff on Musical Mode only applies to Audio and not MIDI

@raino - Thanks for detailed reply. You’ve confirmed what I just found out by myself by toggling Linear/Musical in the track at lower bpm… the as-75 bpm event block stayed the same, but actually the notes did lengthen - they just “disappeared” under the adjacent second MIDI event. Once I lengthened the file block and moved the adjacent, they reappeared as they should at new lower bpm.

My Preferences is already set to Musical.

Bottom line, it appears that I need to first change the Tempo track for an area with no events yet, then move the events to it, not the other way around. Which I believe I read somewhere at this forum at one point but it didn’t make sense to me then.

the as-75 bpm event block stayed the same, but actually the notes did lengthen - they just “disappeared” under the adjacent second MIDI event

That’s not what I’d expect would happen. Can you post some screenshots (or maybe an example Project) showing this? Make sure to have the Timebase controls visible.

@raino - I will try to provide something further, be it screenshots or a simple .cpr in the next few days (I’ve got other life stuff to contend with that must take priority).