At this time of the year I was wondering whether Dorico can be used for choral polyphony - something like "And He shall reign for ever and ever " from Handel’s Messiah.

The actual wording would need something like Wordbuilder to deal with the text as well, I suppose, but the actual music would be complicated on its own, so hance the initial question.

I’m not sure exactly what you mean. This sort of notation is a piece of cake. Heck, you could even notate the entire thing on a single staff.

Hello, I should have included the extra element of a fugue, as is an essential part of the Handel music I mentioned. I have not seeen any reference to the use of fugues or polyphony - I do concede that I might well have missed these, in which case I apologise - and I am interested in this aspect of musical composition.

I have often sung Messiah - alas not now in Covid times - and the glory of the intertwining parts is one of the truly special elements of this musical experience.

you can easily use multiple voices per staff, if this is what you’re after. Create a new voice with shift-V, switch between existing voices with V.
You should also be able to set lyrics above and below the staff.

Bill, I think what you’re asking is whether Dorico is capable of replicating the sound of choral polyphony. Dorico is chiefly a notation program, although you can use the Word builder VST plugin in conjunction with its Play engine in order to approximate choral singing, I’m not sure whether you would be able to approximate polyphony and words with presumably multiple instances of Wordbuilder but there are users on this forum that use it more than I do.

It is quite likely that you will not achieve the result you’re after, but hopefully someone other than me can give you an idea of what can be done. I’m not sure it’s fair to say most of us are notation nuts (and as @DanKreider says, you can have as much written/typeset polyphony as you like) but very few will use Dorico to create a high quality VST-based production without first exporting to a good DAW, and most here will work with a basic setup to help realise their scores such as Noteperformer.

If it’s for four part choir then simply use the template for that in Dorico. If the individual sections need to go divisi at any point as @klafkid explains. It’s no different from writing a string quartet— except with text of course. To reproduce the text you effectively have a choice of two Wordbuilder choirs from EWQL , Symphonic Choirs and Hollywood choirs. The latter doesn’t work at present in Dorico but soon will, thanks to the fix from Ulf to be included in Dorico 4 and can be tried out in the meantime in Cubase or other DAW if you can’t wait a month or so. The big sale from EWQL is due to end at the end of the month, though, if you’re considering a purchase.

I wasn’t planning to create another video this year, but this brief demo illustrates both the capabilities and the limitations of what can be achieved with Dorico and the EastWest Symphonic Choirs for an excerpt from the Hallelujah Chorus: 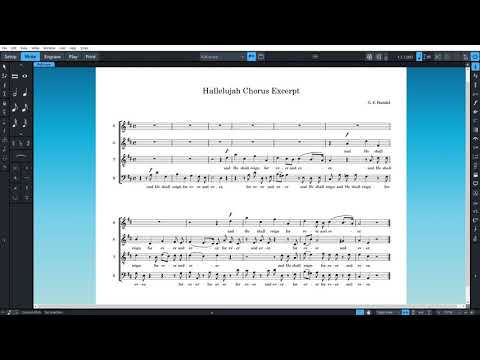 If a syllable begins with a vowel and the previous syllable in the same phrase ends with a consonant, I usually move that consonant to the start of the next syllable.

By default, the word ever is pronounced eh-vuhr, which is not how real singers would pronounce it. It is possible to tweak the pronunciation of individual syllables in the Time Editor of WordBuilder, but I didn’t attempt to do that for this demo.

That’s not how Tenors sing a top A, forte!

I haven’t checked out WordBuilder before, that is pretty incredible. Thanks for posting the video!

It’s supposed to be working ok with Dorico 4…

Thanks @johnkprice - I was hoping you’d post a reply, and interested to know how it coped with polyphony - am I right in supposing you need to invoke separate instances of the VST?

Unless the women’s and men’s samples are used, which I never do, the Symphonic Choirs always need at least one instance of Play for each section of the choir.

I’ve done it using four instances of Play, but a number of years ago in Cubase. I think you have only one Wordbuilder per instance.

Thank you so much for your work on the music I asked about. It clearly shows the possibilities and the limitations of choral polyphony.

Can I just ask : it is possible to tweak the words on this ? I am a very long way from knowing how it is done, but it would be interesting to know.

Manual tweaking of individual syllables is possible to combine vowel sounds and to vary the length or loudness of vowels and consonants.

Unless the women’s and men’s samples are used, which I never do, the Symphonic Choirs always need at least one instance of Play for each section of the choir.

Symphonic Choirs really need one instance per section even if you’re using the Mens and Womens choirs. They are two separate parts in the score after all. You then simply assign the same Womens choir to both Soprano and Alto instances and likewise with the men. I sometimes use the separate choirs which is certainly the ideal situation but the ranges are a joke (who ever heard of sopranos being unable to sing lower than the D above middle C for instance). Hollywood Choirs are aware of this daft situation with SC and only have the two sections which makes for easier blending and less work though the character of the sound is more dramatic and not to everyone’s taste.

That’s not how Tenors sing a top A, forte!

If a syllable begins with a vowel and the previous syllable in the same phrase ends with a consonant, I usually move that consonant to the start of the next syllable.

that makes no logical sense but seems to work nicely in your example - I’ll try that one out myself!

Symphonic Choirs really need one instance per section even if you’re using the Mens and Womens choirs.

In a simple piece such as The Church’s One Foundation in which all sections of the choir are singing the same syllables and the same rhythms, only two instances of Play would be needed: one for the women and one for the men, and both instances would be singing two-note chords most of the time.

that makes no logical sense

This is actually what we singers do.

As a singer of nearly 50 years standing, I would say rather that it depends on the context. For instance “this is” could be sung as “thi sis”, the former most likely to be used in a staccato or faster passage and the latter for legato. In most situations, it’s obvious from the musical context what to sing but John’s example is in fact slightly ambiguous. A sprightly rendering should separate “for” and “ever” which obviously isn’t done in this mockup. I can see this one both ways.