Can undo be included in mixing functions?

I notice the undo button works for everything except what I do in the mixer (moving faders etc.). Is it possible in Cubase 12 Pro to have the mixer actions included in the undo/redo function? 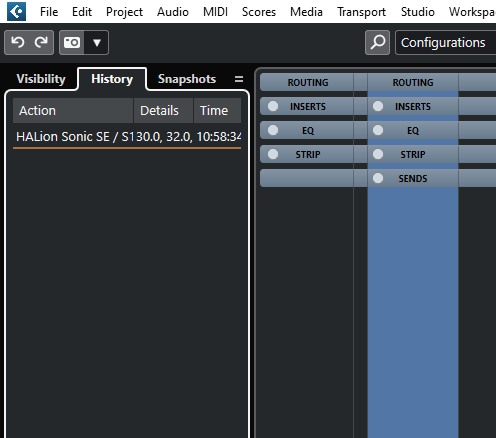 I am not sure if this is what you want. Anyway, there is History tab where you can undo/redo your movements in the mixer.

Yes, thank you for the response, but I wanted it to be included in the undo key command. Like why can I do everything except mixer functions, like it’s a separate program or something. Kind of strange to me.

Ughh! Is this a desired feature by Cubase users? Why would folks not want mixer changes included in the global undo? Or at least the option. Is anyone really thinking about undoing what they did however long ago before they started working in the mixer?

All Other DAWs: Control Z
Steinberg: Why would you want to do that in just one step?

Agreed! Such a simple thing but because it’s Cubase, it’s not simple. and I know that you can make another key command for the mixer undo but that just takes up one more keyboard combination. Hopefully they update this is the next version.

Hopefully they update this is the next version.

I would be absolutely AMAZED if they gave us that option next version. From what I have seen though, Steinberg normally just adds new features, but never updates older workflows.

I think the Alt+Z thing can be useful, but we should DEF have an option to allow ctrl+z to undo ALL actions, as this is what most other modern daws do.

Yes, I also would like to see just CTRL+Z for undo everything.

There surely is a reason for the distinction between CTRL+Z and ALT+Z. But ALT+Z not only undos mixer changes, it also undos parameter changes of VST devices for instance. Also i.m.o. the ALT+Z undo is not convenient for new Cubase users, since many don’t know it exists and wonder why CTRL-Z does not work on particular actions. I honestly didn’t as well for some time. For me CTRL+Z should undo every last actions in the daw.

Also Cubase has the fantastic mixer history and snapshot feature to revert and play with different mixer settings, even save them as snapshots.