Dear fellow Doricians, dear Team,
I notice that I cannot add temple blocks to my instruments when using French language for instruments. I have to switch to English, then add my temple blocks, then return to French (and those instruments are still called temple blocks, which is fine but… kind of disturbing!
Could you make sure that we French Doricians can access those instruments too?
In the same kind of strange behaviour, I noticed that if I need any recorder instrument (flûte à bec) when using French language, I need to write rec(order) in the search field to find those instruments. Any attempt using flute is a failure. May I say that this does not look right?
Thanks for taking these little remarks into account, and I wish you all a better year !!!

re- hello,
Would that have been called “Chinese block” (bloc chinois) in French language ???

According to Kent Kennan’s orchestration textbook, which is what I use, Temple Block is another name for Chinese Block, and vice versa.

Those are different instruments. And temple-blocks are available in English !

As far as I know they are the same instrument.

No, they are not. They are close. But not the same.
Here’s a sample from the excellent Wood block, Temple block, Bloc chinois, Polyblock - Bois - Le Guide de la Percussion - Amélie Stillitano & Raphaël Simon - L'ouvrage numérique dédié aux Percussions : 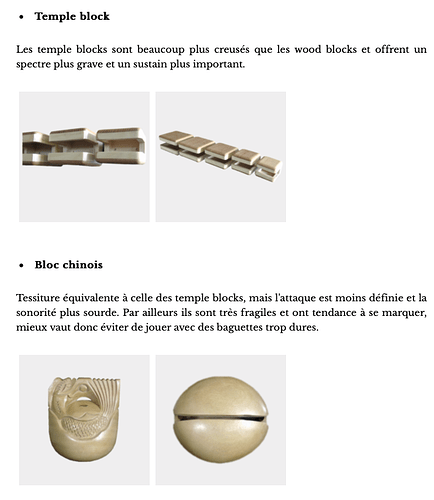 Sorry, but I don’t agree. The top ones a just a more modern version.
Also from “How to write for percussion”
“Templeblocks (also called Chinese blocks or dragon’s mouths; figure 8.2)”

Hi jesele.
Are you suggesting I should tell my client that he’s wrong to write both for temple blocks and wood blocks, because somehow, Dorico — when using instrument names in French — does not allow temple blocks, and because jesele is quite confident that those instruments are the same?

No, point your client to Solomon’s book that Jesper mentioned, p. 173! I’d consider that the authoritative guide on writing for percussion.

PS: Maybe also ask on Music Engraving Tips. You’ll get all sorts of lively opinions there…

Come on, Dan! Not you!
Why would there be those two instruments in English if they did not exist??? And, for the record, I am very close to the people who wrote the guide that I mentioned. They know what they are talking about (as does Daniel and the team), the pictures are real. Please don’t hack my thread, this is getting uncomfortable.

Perhaps there has been evolution of these types of percussion since Kennan wrote his book?

Dear Marc, I’m not intending to hijack the thread. It’s very much central to the discussion. If, as the guide you mentioned says, they are two different instruments, then your point stands. But if they are the same instrument, as Solomon indicates, then that’s the reason they aren’t appearing in the French localization.

I’m not an authority on percussion, and especially not on its French translation, but I think referencing respected sources is helpful to the conversation. I still think it would be worthwhile to ask at MET. I’ll bow out now…

and for the record, some of the highlights from my former life as a percussion player are concerts as percussion soloist with warshaw philharmonic and playing with Boulez with the royal Danish opera orchestra.

Well, folks, I get your point.
I am no specialist about percussions, and will not argue about it. My point is that I have had different jobs to do for different people in those two last months that were using both temple blocks and chinese blocks, and the guide I mentioned explains the difference between those two instruments (and Raphaël Simon and his wife, who write this outstanding guide, are not any of the commissioners of those jobs). This makes three different sources here that know there’s a difference — I am quite confident that the arrangers I work with have those instruments in their setup. Since I found a workaround to access those instruments, I can work. And my remarks stil stand. Especially for accessing flûte à bec.

I’m only trying to be helpful, Marc.

Ok, sorry. But I hope you understand that I cannot tell my clients “sorry, you’re wrong. You cannot write for both chinese blocks and temple blocks because M. Salomon has written it’s the same instrument.” Especially when it seems everyone does not agree on this. Yet it could explain why temple bocks are not available in French.

Well, I’ve sent a picture from a very complete percussion guide written by French musicians (they know Dorico and maybe own it already)… It seems we do use “temple-blocks” in French nomenclatura, and Blocs chinois.
Can you have a look at the recorder issue, too? Thanks !!!

Dear Daniel, I just stumbled upon another little ui problem in the percussion Edit kit window : if I want to add a “bâton de pluie”, I press +, I write b (fine) â (wrong: the â does not appear in the search field, but is added to the percussion kit name!)
One could think that there’s not “bâton de pluie” instrument. Actually there is one, and it appears in the list after I typed “b”. Or if I type “pluie”. But I don’t think it’s doricoish yet

BTW, I’ve been writing quite a lot percussion stuff latelay, and am really pleased at how deep you’ve thought all this out. It’s brilliant and the result is (as always) awsome.