A while back I set up three separate marker track ‘sets’ so I can easily reference which edits and lengths are required when I’m composing library music.

Has something changed int he way it works?

How exactly do “set focus”, please?

It’s accessed in the markers window. 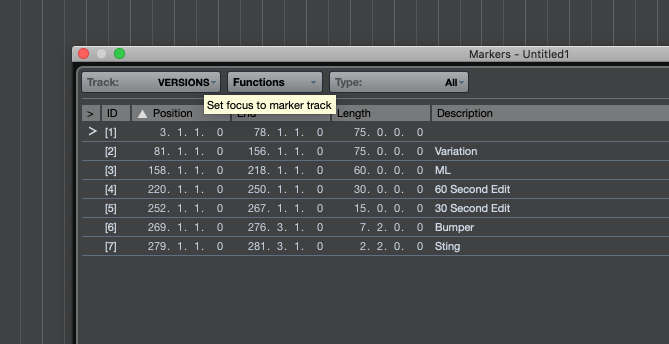 I have a set of three marker track presets, normally I can switch between them, but now when I switch the others are greyed out and can’t be changed.

To me it seems the other Marker tracks are locked.

The actual tracks don’t exist though, how do I unlock them?

If the Marker tracks don’t exist, you can’t unlock them… Right-click to the Marker track and select Track Control Settings. Here move the Lock item to the Visible area (on the right side). Then you can will get the Lock button on the track.

I already have that in the track controls, no, the track isn’t locked.

Even when deleting the marker track and starting again, the two greyed out marker tracks still exist, but I can access them even when creating a new marker track.

I’ve had to create a new project and create 3 separate marker tracks, rather than having one track I can switch marker sets on.

Something has definitely got buggy.

I’m not sure, I do really understand, how did you get to this state.

This bug is present for the very last Marker track only.

I’m just thinking, if your scenario is somehow linked to this one.

I think you might be on to something there.

I’ve run a small test, and imported the tracks into a new project, and all three marker sets are automatically given their own track, but they still aren’t editable in the window.

So it seems like the two issues could be linked.

I have heard about this issue (Imported Marker tracks are not editable). But I have never been able to reproduce it on my side here.

Where does the project (you import from) comes from? What Cubase version, please? Could you share the source project (just with the Marker tracks), please?

The projects all use my master template, which I set the marker tracks up in a year or so ago, in version 10 of Cubase.

I’ve attached an empty project from the template which still has the original marker track, if you open up the marker window, you’ll see the other two inaccessible marker sets.

Thank you for the project.

Glad you’ve been able to reproduce it.

Importing the 3 separate tracks does seem to work well. The trouble is they only work when imported. If I try to create a marker track manually, then assign a marker set, I’m not able to.