Can't use the eraser on SpectraLayers Pro 9

I’m new at music editing (started today). I succefuly removed a voice but when I tried to erase a constant wave sound in a music by cliking on the eraser tool the going on the specter, the cursor turn like a red crossed out circle, so I can’t erase anything. Do someone have any idea ? 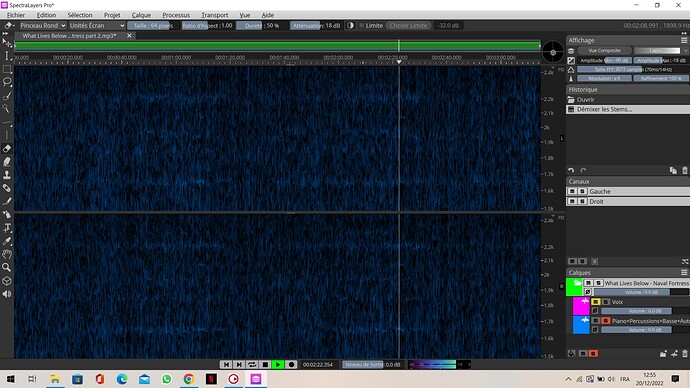 Yes, according to your screenshot you did not select the Piano layer (see the Calques panel, bottom-right). When you unmix a layer, it turns into a group of multiple layers. A group doesn’t have data by itself, but there’s data in the layers inside the group (Voix and Piano in your case).

Layer! I think thats been said but yes, must form that habit!!!

Thank you very much, I could erase what I wanted to, but it didn’t remove the sea wave sound “behind” the music. It seem that the problem is somewhere esle. Thank you again.

Yes that was exactly the solution, thank you.