Cautionary treble clef at the beginning of a grand staff

It’s common in piano music that if a piece begins with the left hand part in treble clef, the bottom staff still has a bass clef at the beginning but a cautionary treble clef between the time signature and the first note. Is there a trick to doing this in Dorico?

I think I recall a workaround that included adding a small rhythmic value to the bar, like a 16th note, and adding a clef change after the first 16th. Various scaling and hiding required.

Not possible without a workaround.

You can take a clef you aren’t using elsewhere, like an octave transposing treble clef, and modify the definition to get multiple clefs. 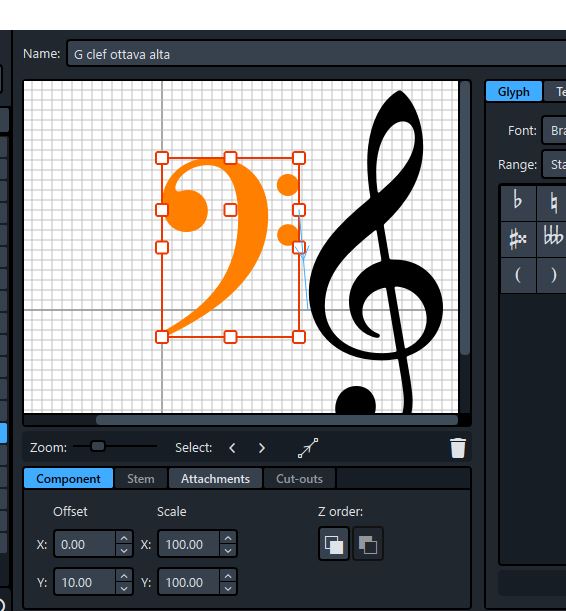 Is that what you wanted?

EDIT: Reading comprehension fail, I just realized you wanted the clef after the time signature.

Hi Vaughan. As you know, this also requires a workaround in Finale. To me, is an example of both programs imposing a needless restriction on the user. Despite the fact that it may now be obsolete, it is a nice tradition, in my opinion, because it establishes the grand staff as the norm and the immediate use of the treble clef as the exception. And clearly necessary for those doing historically informed editions.

Ok, a workaround but this seems like a pretty straightforward way:

Indeed it would be easy! If it’s actually a note, just select it and scale it down via the Properties Panel.

Thank you, all. I figured it would need a workaround and I’m indeed used to have to resort to tricks to do this in Finale. Dan’s way is how I’ve done this in Finale but creating a notehead set is also a clever and nicely Dorican possibility. Ironically, it would even have been possible to do something like this in Finale using a custom notehead.

Actually, I think it’s even easier with the small treble clef. Is Blank Noteheads a default set or one I created? I can’t remember. Anyway, if you apply the Blank Notehead set to the quarter on beat one instead of the clef notehead, you can then add the treble clef after and not have to scale or hide it. You’d just need to adjust the position horizontally a bit.

I ended up creating an extra beat (upbeat bar longer than the actual bar length), entering the music after the extra beat, hiding the redundant rest and then adding the clef before the first note. This created a smaller clef automatically and it was very quick to accomplish.

Even easier would be an option to allow the user to add an initial small clef when desired.