Of course I can always delete the unwanted technique, but this is an extra step. Am I overlooking something obvious?

Note: In my attached example I’m using Strum Up & Strum Down. I have not tried every last combination, but the same thing was happening with mute & ord.

Apologies if this has been covered elsewhere - I searched but did not find anything. 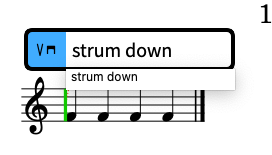 You aren’t missing anything - I suppose it works this way since you could have more than one playing technique notated, at least for some instruments.

But it might be something the Dorico team wants to discuss at some point. I notice it most with dynamics which act similarly sometimes. Like if I write mp at first, and now I want mp< I will get an extra marking instead of a replaement and have to delete one., though I wouldn’t assume (with my level of experience) that there isn’t a reason sometimes where you would want that.

Like @gdball I spend more time having to delete all the extra dynamics like this than I would ideally like. But say, for the sake of example, I wanted to put together “solo”, “con sord” and “dolce” – all playing techniques but complimentary, it couldn’t otherwise be done unless individually offsetting them with the rhythmic grid. But I agree there is scope for improvement here – perhaps someone has a concrete idea?

Ditto to gdball and dko22. One hopes a solution can be found that is quick and easy yet encompasses both “add” PT and “replace” PT … not that I have any idea how to achieve that LOL.

My one thought on implementation is that perhaps doing CTL-Return (or something similar) would replace the selected Playing Technique. Plain Return behaves as it does today.

Ideally with a way to configure the default behavior on Properties.