Clef 8ba has no effect in transposing score.

I am aware that this may have been (partially) discussed before, however, I find it truly baffling as to why the 8ba and 8va have no effect - not even in a transposing score(!).

Dorico is a composing tool.

I know that a workaround exists (adding a 8ba line and sizing it to zero) - however, this is disruptive to the workflow since during composition I don’t know how long the 8ba / 8va section might become and I am never sure if it’s length might extend or be truncated.

This is especially annoying when writing parts for singers, where a chorus might be in a different clef than the verse!

Composing choir sections is such a headache when I have to decide between managing workarounds and viewing the wrong notes.

Does anyone know of any setting or function that will transpose notes when using oct. transposing clefs?

The existing discussion, which centers around guitar parts, helps not at all where voice is concerned - especially since in voice the transposing clef might be replaced with a normal clef for some sections of the piece (in order to improve readability)… you don’t use an 8ba or 8va line for a whole section.

That’s right. Octave clefs have no effect on pitch. You can adjust the pitch in the HALion player or apply a transposing Expression Map to the line.
This has been much discussed and (IIRC) there have been some hints that a solution might be in the works down the road.

Yea, ignoring the ACDA recommendations (requirements if you ever submit) is a big one for many of us. Since other notation apps do get it right, it’s not the problem that it could be for me, however.

It’s incorrect to the octave clefs to replace octave lines. This misconception is perpetuated by notation programs that incorrectly allow this. Dorico is correct in not transposing by octave when using octave clefs.

Excerpt from Elaine Gould’s Behind Bars:

A perfect example for modern practice is Hans Zender‘s „Winterreise“. Dorico should follow his example and take the lead in modern notation practice.
This means that: an octave treble clef for Tenors indicate the sounding score and it should be played back accordingly.
If Tenors are transposing instruments (which is debatable, but not fully out of scope), in a transposing score they should be written differently than in a sounding score.

I suggest that the Tenor voice is an exception, and should not be thought of in the same way as transposing instruments.

A contrabass part is always a contrabass part because it’s labelled “Contrabass”: there’s never any doubt that it might be a cello part. However, there are plenty of vocal scores with staves labelled “Altus”, “Contratenor” and “Tenor”, each of which might use either the Treble G or the Tenor G clef. Or both. You can only tell the correct pitch by that little 8.
Stating that Colin is a transposing instrument is of no help, as he might be asked to sing from either clef. And the Bass clef.

There are also practical uses for being able to change a single staff from Bass clef to Tenor G. Of course, in Dorico you can do that using separate instruments for one Solo Player: but of course you might also want to use divisi on that same staff, so you need Section Players, which can’t do changing instruments.

I transcribe a lot of music from manuscripts (in C clefs) and deciding whether I’m going to use G8 clefs is one of the last things I do, depending on the range of the voices and whether I decide to shift the whole thing up a third or whatever.

Currently, Dorico doesn’t present any ‘roadblocks’, as there’s always a way round it, but there are hurdles. Octave issues with clefs is one of the few non-joyous bits of Dorico, for me.

Octave issues with clefs is one of the few non-joyous bits of Dorico, for me.

I honestly don’t use them often, but the few times I’ve needed to import an XML from a file using them I’ve noticed they import at the wrong octave. If there are differing schools of thought on the functionality of octave transposing clefs, why not just support both of them? Or if staying with one system, allow the user to choose whether they are functional or not? Or allow the user to modify the definition of a clef to suit their individual needs like Finale’s Clef Designer? 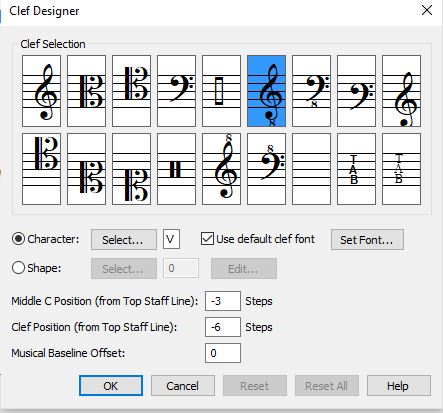 Obviously any change involves programming time and resources, but if there’s not a clear consensus on how users apply these in practice, it seems like giving the user some options here would be a pretty useful feature request.

I think that being able to create a C clef on the third line whose C position was not actually on the 3rd line would be anathema to Dorico’s semantic philosophy!

However, I think the suggestion has been made before of a switch in the Properties panel for the clef that toggles between “use the ottava” and “don’t use the ottava”.

But this subject has been flogged to death here. The team understands the point of view.

With Dorico 3.5, this issue is now resolved: with octave-shifts in the properties panel, one can resolve this problem to everyone’s desire.

You don’t even have to use the Properties panel: turn on the Notation Option for clefs to “respect” ottava, and use the new Tenor instrument that isn’t auto-transposed.