I tried putting a “dummy” note at the start of the flute 2 part (that at least gets the player’s label to show up as Flute 2), and I have tried manual condensing (see attached screenshot). For some reason Dorico does not want to condense the flute1 and flute2+picc together on one line - I am guessing this is because there is an immediate change to piccolo which transposes up an octave. Ah, I just tried inserting that “dummy” note a few bars before the piccolo entry and it makes the score condense as I would expect.

So, is there a way to force the “muta in piccolo” label (and resulting piccolo staff labels) to happen just before that player’s first entry in order to force those 2 players’ staves to condense together? Alternately, is there a way to force the piccolo to condense with the flute, in spite of its transposition, in passages when it has only rests? It doesn’t make sense to have pages and pages of an empty piccolo staff in the score, full of default bar rests, when it could and should be grouped together with the other flute player. Is there some trick that I am missing in order to make this happen correctly? (apart from adding a useless note and making it invisible with the opacity value in the color dialog).

It would be nice to also amalgamate fermatas (see oboe and clarinet parts in the middle of attached screenshot).

In spite of these woes, Dorico is a joy to work with and the results are fantastic! 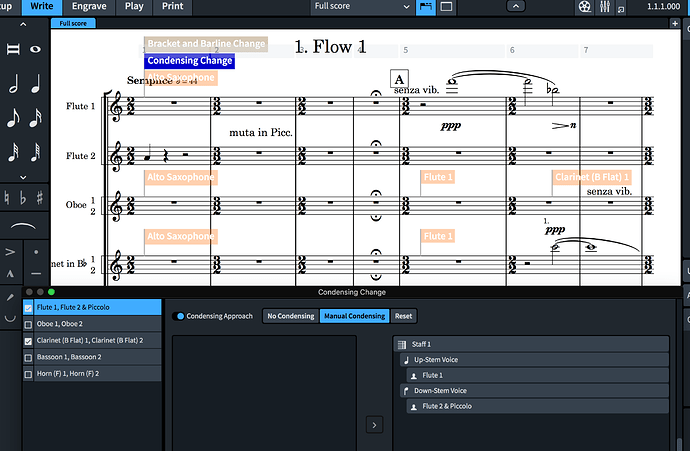 Regarding your point 1:
Dorico does not yet handle condensing for any instrument other than the first one held by the player.

Hi there, I encountered a bug where music for a doubling player may not show up in a condensed staff if “Allow instrument changes” is disabled in the Layout Options. Enabling that option or removing the other instrument fixes the issue. See attached...

For the Fermatas question you could set your Engraving options (Hold and Pauses) to show just one sign per staff.

Ah, I was not aware that condensing did not (yet) take into consideration multiple instruments held by single players. Thanks for providing the link.

The fermata issue - great - thanks!

after reading that other thread - condensing should correctly take into consideration the first instrument held by the player (in my case flute 2) during the rests at the beginning of the piece… if only I could force the instrument change to happen the measure before the piccolo is first used, instead of at the earliest possible moment (the beginning of the score, in my case), which it does by default.

Just to revisit this thread: in the forthcoming 3.5.10 update, dynamics will be positioned below the staff in situations such as the clarinet entry in the screenshot in the first post in this thread, rather than above as they are at present.

Just to revisit this thread: in the forthcoming 3.5.10 update, dynamics will be positioned below the staff in situations such as the clarinet entry in the screenshot in the first post in this thread, rather than above as they are at present.

Hi, Daniel. I have a related question:

I saw (maybe my comprehension is wrong) John Williams did write his Piccolo as 8ve-transposed instrument even if it is condensed with Flute in his Star Wars main theme.
However, I believe that there are arguments about this, and I still failed from finding related definitions in “Behind Bars”.

From your perspective, do you think that Piccolo should be written as an 8ve-transposed instrument while being condensed with a Flute?

Dear Shiki,
I don’t know which edition of John William’s scores you’re studying, but the Hal Leonard scores I’ve been studying do not condense the piccolo flute. It is below condensed flutes 1 & 2. And, of course, written one octave below the sounding pitch, as should be when it’s a piccolo.
I note that occasionally, that piccolo player is flute 3.
Hope it helps!

I don’t think I’ve ever seen a score in which piccolo is condensed with flute. The only comparison I can think of is when celli and bassi are written coll’ottava, in which case the notes are written at the cello pitch and it is understood that they will additionally sound an octave lower because they are also played by the double basses, but (as I’ve said before), I don’t really think of that as condensing as such.

The only one I have ever seen is the Eulenberg miniature score of the Verdi Requiem (on IMSLP if anybody wants to look).

I never want to see another one. The complete score has plenty of other examples of “condensing sudoku” for people who like solving puzzles.

Somewhat related (I hope) to this, I have a score with two horn parts. In the problem bars, only Horn 1 plays – a short phrase with a pickup. When condensing, Dorico labels the part (correctly) as “1.” but also puts a rest under the pickup (though nowhere else in the phrase). Aside from being unnecessary and not what I wanted, this also pushes the “mf” dynamic above the staff with 2 other text items.

I attach galley view, condensed view, and a minimized Dorico file. I find that if I delete the first two bars (I’ve already deleted many more between the beginning and the phrase in question), then condensing behaves as I would expect. But I don’t understand what information at the start of the piece prevents proper condensing of this much later phrase, even after I inserted a Condensing Change that seemed as if it would do what I needed – it seems to make no difference. No doubt there’s something I don’t understand about condensing or changes thereof.
Horn condensing sample.dorico.zip (444 KB)

Dorico only starts the condensing phrase on the final beat of that bar, which means that it considers Horn 2’s rest at the start of the phrase to only be an eighth/quaver (0.5 quarter note beats) long. 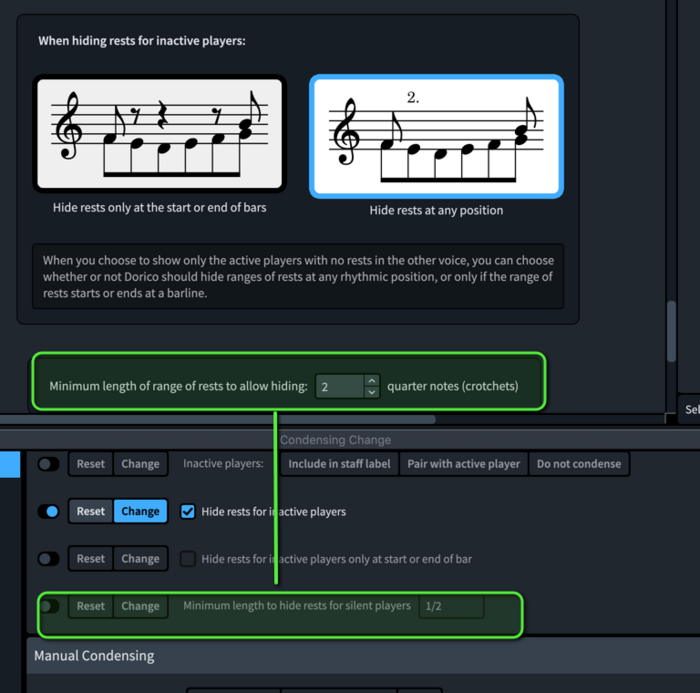