I upgraded to 3 pro this morning and have been enjoying testing some of these incredible new features! I have spotted some peculiar behaviour with the auto-condensing (which is staggeringly good on the whole, even at this early stage!) which I can’t see mentioned in the release notes. 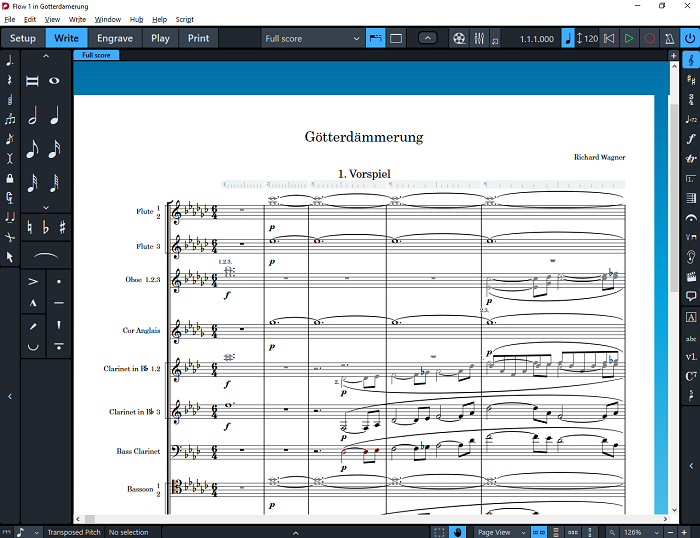 The attached screenshot shows the (quadruple) wind at the beginning of Gotterdammerung. The clarinets have condensed as 1&2 together and 3 on its own stave, even though 1 + 2&3 would make more sense (as 2 and 3 have the same rhythms). I thought I might be able to force it to flip by turning on the pitch crossing limit (and turning it to 0) as 1 and 2 cross a little on this system, but that has no effect.

It’s readable as is (with a bit of slur shifting in engrave mode) so i’m not too bothered, but just thought i’d check whether there’s anything I’ve missed. If not, hopefully this example will help the developers improve the condensing algorithm yet further!

What’s before the beginning of the phrase on that system, for clar 1, 2 & 3 ? A bar rest. As is, Dorico cannot allocate more than two different voices for a condensed phrase that starts with rests.
This topic has been “already” talked about and is documented in the Version history (https://www.steinberg.net/forums/viewtopic.php?f=246&t=167469), so it might be fair to change “bug” to another word in the thread title… and search before posting if possible

I’m curious what would happen if you put an explicit bar rest in m.2, perhaps for all three clarinets. Or, a hidden note in one voice and an explicit rest shown in another.

Ditto for the Flutes, which could (on this page, at least) be consolidated onto one staff.

I would try it myself but I’ve not yet upgraded.

BTW, if you want the Bass Clarinetist to like you, you’ll put the part in treble clef (and transpose any sections in A to B-flat).

@MarcLarcher I’m aware of this documented limitation - that’s not the issue here. I’m suggesting that the ‘correct’ behaviour would be to put clarinets 2&3 on the second stave rather than 1&2 on the first.

The fact that the pitch crossing setting doesn’t fix this does make it a bug I think, but you’re right that that bit has been mentioned in the forum: https://www.steinberg.net/forums/viewtopic.php?f=246&t=167619

Agreed! Maybe this unwanted decision is related to that rest issue… I’ll leave Daniel or somebody else from the team answer this interesting question.
BTW : I love your new thread title

I think the scoring notes blog post about condensing is key here: they plant the seed that more control over these decisions is forthcoming (hopefully in a 3.X upstate) with manual condensing changes. Fingers crossed!

Dorico doesn’t “know” that it should prefer clarinets 2 and 3 together, because if it determines that clarinets 1 and 2 are compatible, it doesn’t look any further. There’s already quite a bit of computation (he says, putting it mildly) required to work out viable condensing combinations already, and working out the optimal condensation for every possible pair of instruments for every phrase would add quite a bit more, so (for now at least) Dorico doesn’t do that.

Once you have the ability to tell Dorico explicitly how you want it to condense that group of players, you’ll be able to get your optimal result with no bother. And we do absolutely anticipate adding the means to create condensation changes in a free update to Dorico 3.

Great news! Thanks Daniel for this information!

Thanks Daniel - I thought this was probably the case. This future setting (explicitly choosing how groups condense) would have to be a system-by-system switch to be of any use, right? The thought of that sets my spidey-senses on edge but I’m sure your brilliant team have already logicked a better solution - perhaps some more global settings (like pitch crossing) to bias the auto condensing (i.e. half way towards fully intelligent which as you say would add quite a bit more computation). Is it too early to say how the explicit condensing options might look to users?

We haven’t nailed down all of the specifics, but it will work conceptually similar to something like the existing note spacing change you can create in Engrave mode. You can have confidence that we know what we’re doing and have got this properly in hand.