Hi all. I’ve just started using 3.5, haven’t gotten far yet but it’s beautiful and the updates look very impressive and non-trivial, so kudos to the team!

I sorely needed the condensing feature as I am currently engraving a large opera. I have the 3.0 manual bookmarked and went through the condensing section, and I read, as best I could at this point (I never saw version 3 until a few days ago), the relevant parts of the Dorico 3.5 Version History pdf.

I switched on “Condense divisi and adjacent players” in Layout Options > Players > Condensing. FYI going forward, each string section is split into desks A & B in the handwritten score and the composer wants them to stay that way. Dealing with labelling that well may be another topic sometime but for now you can just see they’re labelled things like “Vn. I I.II” or “Vc. I.II”. But anyway that will come, the problem right now is with condensing being either too much or too little and how to manage it on a finer scale than layout-wide. I left the player panel open in the shots so you can see how these are; the music of each individual player or section was entered on its own.

I wanted to show a later point where I’d want to return to condensed Cb., then I came across something I did not expect to see…

But then the new weird problem I noticed are the celli here. Both desks of Vc. are showing, not condensed, yet they are completely unison, every last note and rhythm the same. Shouldn’t these be condensed and marked “unis”?? What?

In trying to figure out what is happening here I could think of only one thing, though it isn’t a great or desired reason for keeping a section non-condensed for many pages. 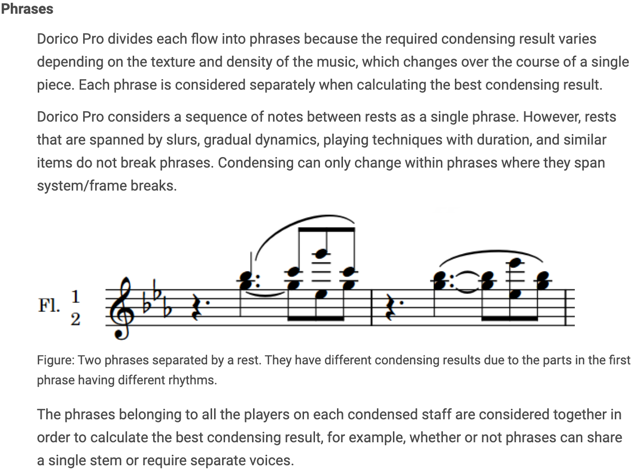 If you add an empty condensing change (don’t flick any toggles in the dialog - just put a condensing change in) at the beginning of bar 46, Dorico will start a new phrase there, enabling it to process the previous however many bars with a different condensing approach.

Hey there, and thanks. I sometimes can’t find the way to do something because I don’t search the right phrasing in the online help or manual. Thing is when I search “Condensing Change” I don’t get anything clear. It’s a great label for the act of making a change to your condensing, though. I recommend that when the team develops a manual for 3.5 it should include a heading by the name of Condensing Change.

Anyway, how do I add one? Is there a page or place I can read where this is gone into?

Check page 24. “Condensing Changes” were just added in 3.5. And with the rapid development pace, the Version History is a stopgap until the online manual can catch up.

Condensing Changes were added in 3.1, but the manual’s a little behind. See page 4 of the 3.1 Version History rather than the one that Dan’s linked to.

Will do. Thank you BOTH

(a moment later) Engrave > Condensing Change… WOW! This is a whole new world, gonna take me a minute.

By the way, would you mind letting me know whether I was right in my guess about the reason behind the cello condensing/non-condensing behavior, the lack of rests for many systems?

You are absolutely correct in that guess - read the second paragraph in the screenshot I provided above.

I’m starting to get the hang of it, thank you.

Another question from this whole matter: Why do you suppose those tuplet brackets have appeared on the beamed tuplet 16ths? Tuplet brackets seem to have popped into existence only on the condensed staves and furthermore only on 16ths (maybe they’d be there on smaller values if I had them) but not 8ths. You can observe this in the 1st and 3rd screen shots above, most easily in the one “cellos begin to differ” where you see the Vn II condensed staff has these brackets while the non-condensed cello staves do not. This behavior extends to all instruments of all types; if they’re condensed and have that kind of tuplet, the brackets have appeared whether the voice’s stems are the same way or opposite. I checked every one of these yesterday before getting into condensing and these were all just 3’s without brackets. Even now if I go into galley view, or uncheck the Edit > Condensing, they change back to tuplet 3’s without brackets again.

I worry I’m running the risk of missing something obvious, but I think I’ve combed through the various Option dialogues and I can’t figure out what would apply to so specific a case. Brackets in Engraving Options are set to show only when necessary (and again this did all look right before condensing); condensing in the Options doesn’t help, nothing in condensing under Notation or Players > condensing under Layout.

Ah, too bad for these fingers but at least it’s not a mystery. I notice too that condensed passages cannot be selected in Write mode (makes sense) so I’ll have to go through and command-click the bracketed 16th tuplets then change their appearance in the bottom panel. Or use Select More which will select more of the same thing on the same staff and voice throughout the flow. Of course it will also select tuplets of other sizes, and of course you want the brackets on tuplet quarter notes and larger, but nonetheless it may save time as there’s less to deselect than select in this case.