Confused with players vs instruments in wrong order

Hi all
I’m working my way through an arrangement for big band and learning to use Dorico while I’m at it.
I how have a problem, I’m certain due to my lack of understanding with the terminology of Dorico and the way it works - I’m an ex-Sibelius user.
I would like to number my trombone section 1,2,3 etc. So I’ve set up Players with the names Trombone 1, Trombone 2 and Trombone 3.
I’ve then selected instruments for each but Dorico has numbered them the wrong way round.
Is there a way I can edit the instrument names?
Sorry if this is really basic but I’ve tried the three dots menu, right click and can’t see an easy way. The score is numbered according to the instrument rather than the player so I need them to be the right way around, or at least to be able to edit the names on the score instead.
I’m using Elements 4.1

thanks for any help - it’s greatly appreciated. 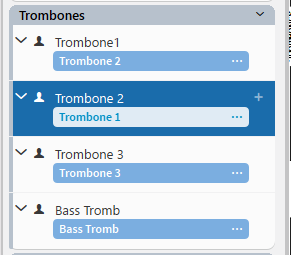 Hi all
after a bit of looking around I found the settings in Layout Options > Staves and Systems >show player name instead of instrument names which makes the score look the way I want, but I’m still a bit confused as to why the trombones have been numbered the way they have.
Still, this solves my issue for now, but if anyone has insight into the instrument numbering I’d still be pleased to learn the reason.
Thanks again
JK

Whenever I’ve created players with an identical instrument, the numbering happens automatically.

You can drag instruments between players, if that helps?

They should number automatically, but in instances where you do genuinely need to rename them, you can click on the second bar for each instrument (the actual instrument in the player box) and click the three little dots. That will offer you the options you need.

Ultimately, what has happened is that you renamed your players, and those names are out of sync (apparently) with the names of the instruments.

I’m pretty sure there’s a big band template you can begin with next time that might save you some grey hairs.

I’m not in front of it just now but when you double click a player name to overtype it I’m pretty sure an open circle icon appears at the right edge of the field - click it to reset the player name.

There are various other features at your disposal: you can edit actual instrument names (click the three dots to the right of the instrument in Setup mode), there’s the Use Player Name thing you’ve already found in Layout Options; but the regular automatic functionality works fine for this particular scenario as long as you let it do its thing.

thanks @DanielMuzMurray @Romanos @pianoleo what you’ve all said makes sense, one of the issues is being such a new user I think I’ve probably done things in an odd stumbling way which is probably not a logical order. I think the concept of player/instrument was a bit alien to start with, I don’t think it is like that in Sibelius but I can see the advantage of the Dorico way. I’ve got my head around it now.

@DanielMuzMurray I will check out the template next time. This one’s been a big learning curve for me but I’m sure it’s worth it.

Thanks everyone for all your help. It’s much appreciated!
JK