Creating a Test, need to hide all full bar rests

Hi,
I’m a Finale user trying to switch to Dorico after 25 years using Finale. I would like to create a test for my theory class, and I need to hide rests. I’ve searched the help file and this forum and found some things, but I keep running into the same problem. The first section of the test, the students have to voice chords that are requested by roman numeral, and then resolve them. I need the the measures above, that they need to write the chords in, to be blank. I have tried hiding the rests by selecting the start and end points in the properties window. I have three bars they need to do this in. I can get rid of rests in 2 of the three, but never all three. I had thought to put notes in the measures and hide them (or make invisible or whatever), but couldn’t find anything. When I typed in “hide notes,” I got 135 results that had nothing to do with hiding notes. Even finding “hide rests” led to hours of filtering through articles and posts that had nothing to do with what I was looking for. I really need this to work to be rid of Finale. If not an answer, please, I need a valid workaround. Any suggestions? Not having default measure rests should not be this difficult a task, and I really hope I’ve missed a setting or something. 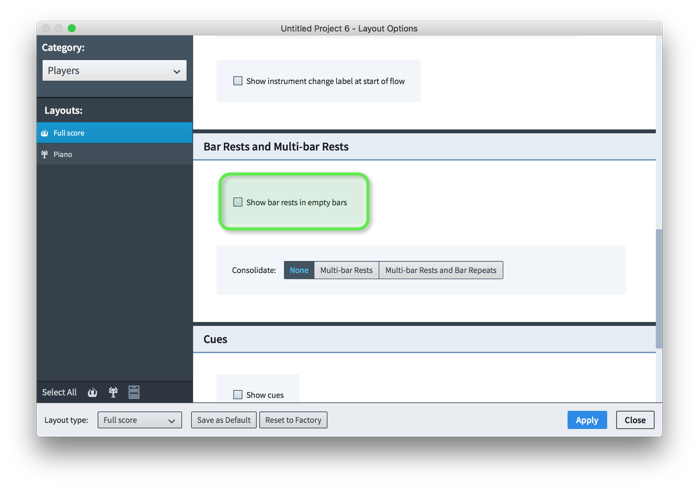 If you want to hide primary rests (rests in the default voice where there is only one voice present) in just a few bars, not in a whole layout, then you need to know that Dorico can only start and finish the “Remove rests” function on explicit primary rests; that is to say, ones you’ve entered yourself.

You need to replace the first (implicit/automatic) rest you want to hide, with an explicit one. You do that by setting the caret in the right place, hitting O (for force duration), “,” (comma, for rest input), the rhythmic value you want to input (6 = quarter/crotchet etc.) then any of a, b, c, d, e, f, g, y or playing any note on a MIDI keyboard. You can then select the rest and go Edit > Remove rests.

Wow. Thanks. I don’t think I thought to look under players. I must have checked everywhere else. I think this fixes my one remaining stumbling block. Thank you so much.

Now read the paragraph I added as an edit. You may need the additional control that this gives you.

Thank you again. that may come in very handy soon for another project I have for the class. I appreciate you taking the time to write that up.

Thanks Leo for all your helpful posts! I’m making tests right now as well, and I could have forgotten the explicit rest thing. And Tim, don’t feel bad about missing a setting. Notation is complicated, and figuring out where to put all these options is a non-trivial task for the Dorico team, I’m sure.

They’ve changed the paradigm in important ways as well, which can be tough for some of us who’ve been around the block. Just before I started using Dorico in late 2016, I was making fun (gently I hope) of someone using Lilypond because it seemed so complicated to me. I was like, “it could take a half-hour to figure out how to input a rest!” Well, without realizing that Dorico almost never requires rests to be entered, I spent about a half-hour trying to input a half rest!

But I am a total convert, writing concertos, orchestral arrangements, and now, transcribing microtonal string quartets by Ben Johnston with the amazing Helmholtz-Ellis extended just intonation font. Dorico is an amazingly versatile tool.