Good evening from Texas. I have Cubase 11 | Elements and am having an issue with the metronome not keeping a consistent beat. after importing stems tracked in other DAW’s, which were recorded in the same exact BPM as my projects. SO, I recorded a test click using Google metronome and imported that click wav file and lines it up exactly to the Cubase metronome and hit play. Within a minute or so the beats begin to get off and within 3 minutes they are off considerably. I have turned off the midi option within the metronome settings but issue remains. Any suggestions on how to solve this problem would be greatly appreciated.

It sounds like the click your importing is not accurate. I work with other musicians using different DAWs and never see this problem

As mentioned, the imported stems of songs recorded in other DAW’s get off with Cubase 11 metronome after a minute or so and gradually worsen as the song plays, which is why I recorded the google metronome test wave. The imported stems are not the issue.

I also have Cubase 10 Elements, Cubase 10.5 Elements on my studio computer and opened each of them, imported some stems and the same issue is happening in each of those older versions.

Is there a sample rate conversion happening? I’m using Cubase 12 pro and I don’t see this.

Please observe that the timing in Cubase derives from the audio device that you use. Maybe you can switch to another audio device and check if that affects Cubase’s timing.

Do you know how to do this?

Not sure, Johnny, I have a Dell windows 10 with i7 and my interface is a Komplete Audio 6, which I found to be the best of the inexpensive units I bought, tried out and compared with 4 other popular low cost brands.

Were the files recorded by someone else / with a different audio interface ?
Some audio devices aren’t very precise, even though you set them to operate at 48 KHz (for example), the converters can actually work at a slightly slower or faster rate, for example 47.980 or 48.020 Hz, so after the recording was done and you play it back along with the metronome, it will indeed start drifting away toward the end of the file.

The stems in question were tracked in Italy but no converter was used. I received wav files via their DAW. Project is being tracked on my Cubase 11 Elements , and their SF 1 DAW in Italy, both were done in 44.100 KHZ. The stems tracked in my DAW are not off when I send them wav files.

I found the solution. Inside the Cubase “studio setup” tab I turned on the “externally clocked” option and now the stems all stay on beat with Cubase Metronome. Thanks for those who tried to help!! 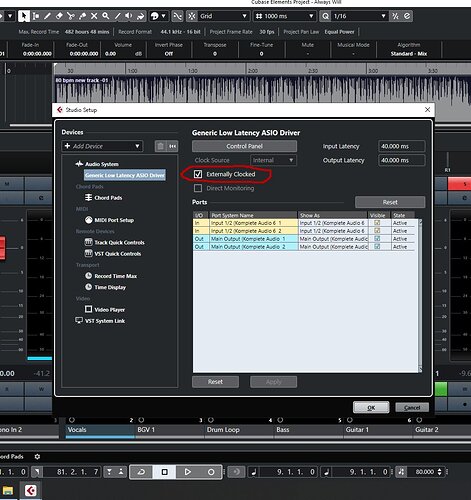 The stems in question were tracked in Italy but no converter was used. […] both were done in 44.100 KHZ.

… ??? How did they even manage to obtain a digital audio file onto their computer if they were not using converters ? This is the basics of digital audio.

And is there any reason why you would use the old “Generic Low Latency ASIO Driver” instead of your Komplete Audio 6 dedicated driver ?

When using non-dedicated drivers (without external clock), it gets the Clock from the computer and not from the audio device, and since the two can eventually be slightly different it can lead to timing offsets.
What happens when enabling External Clock is that it will get the Clock from the source, that is, the device selected in the driver, and in your case it’s the Komplete Audio 6.

If you were using its dedicated ASIO driver, it would get the Clock right without having to enable External Clock, and you would probably have better performance.

As Louis suggested, try to use the dedicated ASIO driver for your interface.
You can switch it here: 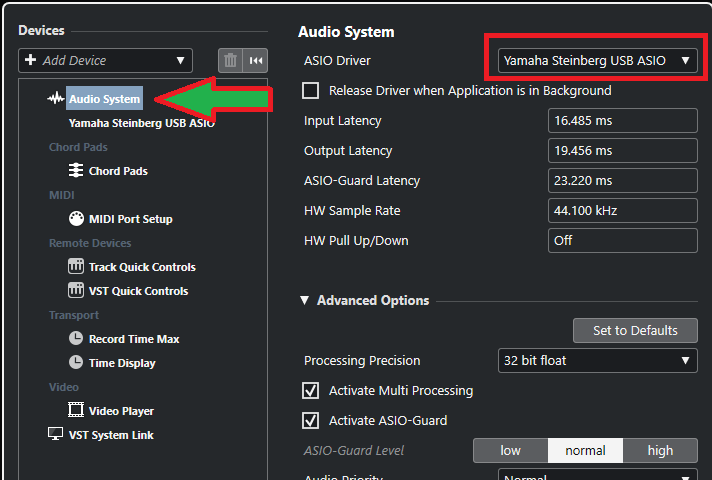 … ??? How did they even manage to obtain a digital audio file onto their computer if they were not using converters ? This is the basics of digital audio.

I don’t wanna split hairs but when one only uses VSTi’s it is possible to generate stems without ever using a converter. Since we also have virtual vocal synths now the term “in the box” could really mean “all only in the box”.

Let’s hope the Generic ASIO Driver is also this time, as ever so often, the offender.

They created the stems within their DAW, they didn’t upload them.

I first unchecked the external clock then I switched over to the Komplete 6 and metronome is in sync with imported stems. Do I need to check the “release driver” box? I do use this computer for internet browsing. 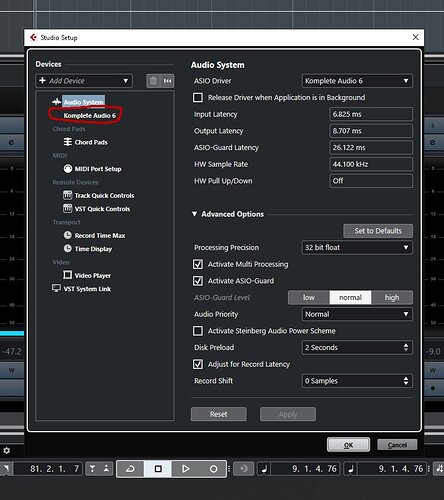 You only need to uncheck if you browse the internet while Cubase is still open.

Do I need to check the “release driver” box?

Thst should not be necessary. If, however, you don’t have sound in Windows while Cubase is open in the background, @Louis_R has made a nice guide what settings to switch in Windows to get the sound back.

Now in my profile header