I have a very weird issue when freezing audio tracks in C11:
I have a vocal track running through external gear. If I’m freezing this track it is recorded in realtime and plays back normally afterwards. So far so good. BUT: Some of the files are shorter than they should be, so there is no audio even though the clip shows (since the clip and not the freeze-file is displayed).
Anybody ever had the same issue?

Edit: I noticed this is related to the takes that are on the other lanes of the tracks. So the freeze-file is the actual clip but the length of it is taken from another lane (that is not selected).

@andow
I am curious to see this, could you post a screenshot, please?
This is perhaps a bug, I would like to see which lane is active and which lane is the one that governs the length of the frozen file. What happens if you swap the position of them up/down?

I could make it happen. This is surely a bug. As a workaround, you can set a long enough amount to the tails parameter. Nice catch. 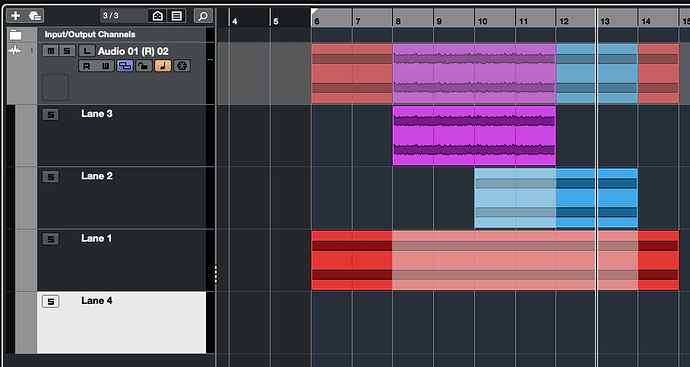 In this case, the last red portion won’t be included unless ‘tail size’ is set to enough amount, i.e. ‘tail’ stars at the end of the blue lane.

Thank you for your reply, Takashi! Here is a screenshot where you can see what’s happening:

AUDIO is the track I want to freeze and lane 2 is active. After freezing I drag the frozen file into the session on FREEZE FILE and as you can see the file starts at the correct position, but the end is defined by the (inactive) lane 1.

Hi @andow,
I had a reply from my channels at steinberg that they confirmed this bug, they cannot promise a fix anytime soon, perhaps code-wise it may be more complicated than it looks. But at least they’ve acknowledged this as a bug, so I guess hopefully it will be fixed in later versions. Great catch again.