Cubase 11 Pro crashing on some projects --- Someone else had this problem?

Hey, i am kind of asking this here as a last resort. I have been writing with the support but nothing they suggested helped so far.

I have two larger Projects that at some point just crashed the software when im trying to open them. No error or anything, just crash (It always happens in the “Connecting with Files” Dialog). Sometimes there’s also the Error “Critical error, try to rename the project etc.”, most of the time no error tho.

I have tried disabling all plugins and even removed them all manually so there was only the stock plugins in Cubase but it still crashed. I also reinstalled Cubase, i switched up the audio driver, copied the project folder to a new place, renamed the file, nothing helped. I am very desperate at this point because i could’t keep working on two of my projects for a month now. Also the support guy could open the .cpr project on his pc (without the audio files etc, just the project file). So i kind of think it is maybe an error occurring while loading the audio files?

I’ll link you a crash log, i tried looking into it but i am not an expert so im not sure what to take from it.

Maybe someone here can give me some kind of help, anything is appreciated! Thank you!

Have you tried creating a new Project and then using File>Import>Tracks from Project to pull in the Tracks from the broken Project. 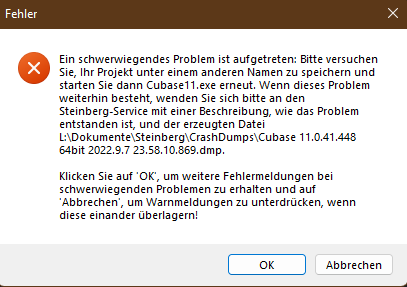 I tried it, in the new project i do as you suggested, then it loads the affected project and then i get this error i already described in the post that sometimes appeared before when opening it manually as well. It’s german but im sure you have seen this before “Try to rename the project etc.”