So after i updated Cubase last night i get “could not create record file!” every time i try to record Wave file. FLAC and AIFF seem to work just fine so its not a folder permission issue.
It starts to record Wave file when i change the format from AIFF or FLAC back to Wave but when i press stop i get again “could not create record file!”.
Does anybody have any idea whats the problem here or is it a serious bug?
I read some earlier post regarding the same issue but didn`t find an answer…

If you are using Windows, it might be the path length. There is/was a bug in windows that only affects files with .wav extensions and prevents them of using the max 260 characters.
Or it could be some export settings that you are able to set in cubase that is not possible for cubase to render.
A screenshot of the export settings could help. 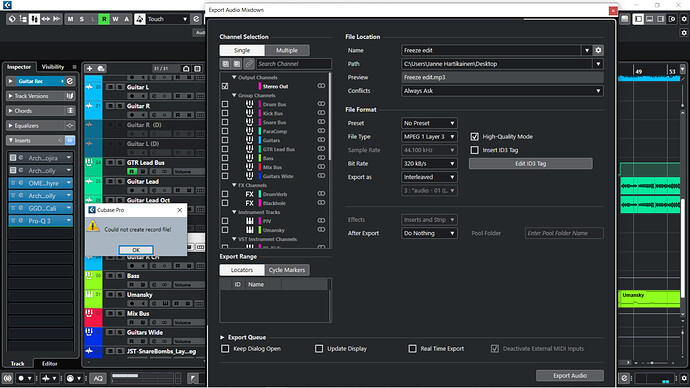 but when i press stop i get again “could not create record file!”.

Wait. Are you telling us that you are pressing Stop in the middle of the rendering ?

I have the feeling I’m missing something.
Is the issue about Rendering (with the Audio Mixdown panel) or Recording on a track ?

Ok first of all this problem wasnt about rendering it was a about recording audio and i just found out that it was my avast antivirus that was blocking Cubase , but i still dont get it that why it was only blocking the wave files if the the other recording formats are stored to the same folder…?

Nowadays computers do no need additional anti-virus… Window integrated security is more than enough. A lot of people are complaining about these kinds of issues, and when you dig a little you find out they run either a third-party anti-virus, or useless programs like “drivers updaters” or “PC optimizers”, or more generally all of this at once.

Get rid of the AVAST.
If you need an additional security system, choose a better one.

With most anti-virus programs you have to register Cubase as a trusted app/program. I just make do with Defender.