I dont know if this applies to everyone but this crash happened to me as well Cubase 11 and 12 getting stuck when closing would just sit there had to reboot computer to stop it. it turned out the culprit was my motu microlite.

When I unplugged it, all the crashing went away has not crashed since. Sux though i have several midi synths now are unplugged. Hope this helps!

That it im done after so many years of problems and lack of good updates, im no longer paying for updates, i tried bitwig and im blown away by what ive used, cubase is lacking so many features and is to much in the past, i can control two different instruments with one midi track in bitwig, edit pitch in the timeline and play with modulation, cubase.

Sorry to hear that.

I suppose, it will be inevitable, at some point people will migrate.

The same here, i use templates with Vienna Pro and then i tried to use templates with instrument tracks, however, it crashes. My CPU is OK and i have a huge PC… Is the problem resolved when using Cubase Pro 11 instead ?
Sometimes, i wonder if the drivers of my Motu 828mK3 makes problems too.

If there crashes you will get crash dump files. Please upload one or two here to the forum, so we can have a look at it.

I have similar problem with Cubase 12 on Windows 10 crashes by self without reason during the working day (this happens when I have disabled option “Release Driver when Application is in Background”).

Another thing is that it crashes or freezes different (with reason) when I have the enabled option “Release Driver when Application is in Background”:
When I switch/click to any other program (e.g. Firefox, Notepad), then back to Cubase it is crash or freeze. I need to have this option enabled because I have to switch between programs. When an option is selected, Cubase freezes or crashes 5-7 times in the work day. Every 2–3 times once you have to restart the whole system, because it says that there is a problem with the license (attached picture). This also happens when all devices are disconnected, the only thing I need to have connected is Interface with sound card. I have the latest version on Cubase.
And is just a small thing, but maybe related: Usually, after finishing work and closing the project, it is impossible to close Cubase (I have to force a closure on Windows ctl+alt+delete).

I am a very patient person, but I have to do something about it because I’m wasting too much time. Years ago I worked on Propellerheads Reason, in my opinion it is more of a toy than a professional DAW like Cubase, but it never, ever, even once crashed or frozen. 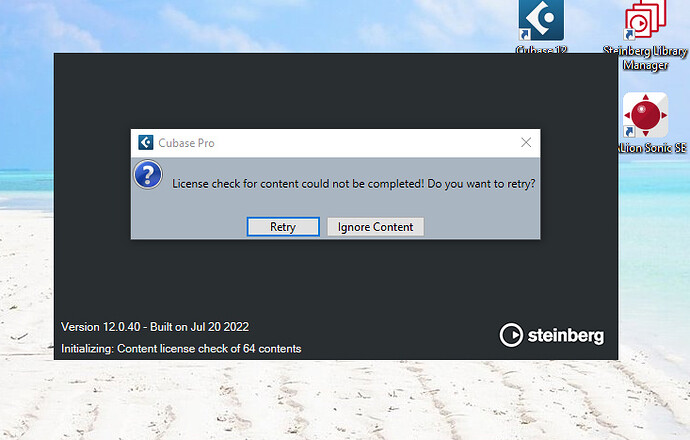 I will be very grateful for your help.

First of all you have uploaded two Dump files from two different releases of Cubase. The dump file for release 12.0.40 basically shows that the installation is somewhat broken, it even doesn’t load anything in the background.

I see you already installed the upgrade to 12.0.52, because the second dump file is from 12.0.52 and it shows a trace that crashes in a plugin.

I don’t know this plugin, but it is obviously the reason for the crash. You should check if there is a later release of the installed plugin, or remove it so that Cubase doesn’t load it again.