That is very interesting, in that when i compared Steinberg Power Scheme to my manual changes in Device Manager, they were quite similar.

I wonder why Cubase responded differently …

Still looking for some settings you have in common, and I don’t use. This led me to the Midi Controller section in the Studio Setup.
Could you post your Midi Port Setup? I’m especially interested in the your settings regarding “DirectMusic” and “WinRT MIDI”: 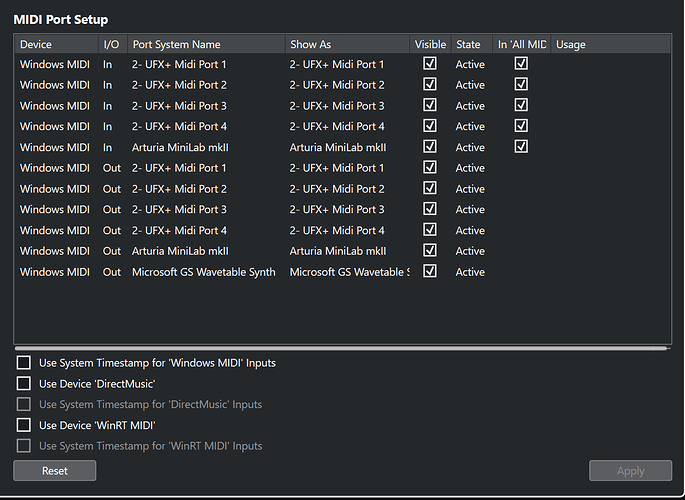 Could you post your Midi Port Setup? I’m especially interested in the your settings regarding “DirectMusic” and “WinRT MIDI”:

Here is my midi setup. Thanks again for your continued help!

I have been reading this thread with interest. I updated to Cubase 12 last Thursday, the whole process went fine, no problems. Thursday and Friday I played through 8 projects (songs) I am working on that were created with Cubase 11, they all played fine and I noticed that the performance meters seemed lower than in 11 and not one of the songs peaked the performance meters. Saturday I recorded some new vocals for one song, everything went fine no issues. Sunday & Monday I worked on the same proj…

Sorry, don’t know what SD3 is but I think it’s worth activating the Steinberg scheme no matter what changes you have already made in Windows, if for no reason other than to remove the possibility that the Steinberg set up in C12 is doing something other than that which you can do manually?

I think you got me wrong, I did try the Steinberg Power Schmeme. Actually I’m using it currently. It just doesn’t do anything for me and the performance problem of C12.

These are my settings. All MIDI-ports are USB, except for the MIDI port of the Multiface. That is not in use currently. 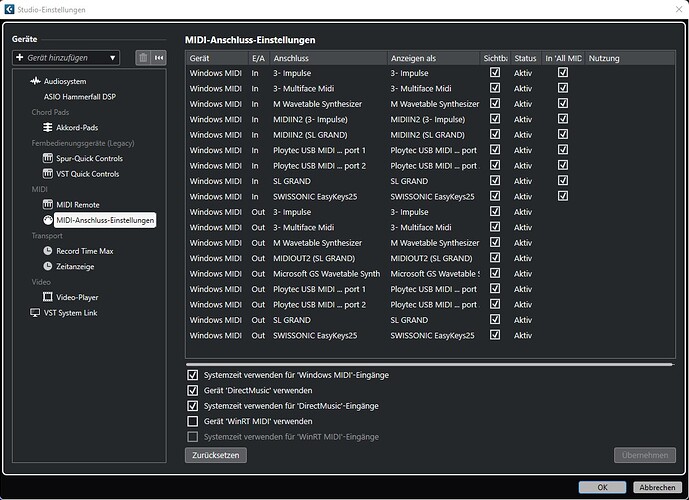 There is still an occasional CPU spike and audio ‘pop’ even on a very light project of just a few plugins. This seems to be more likely if a track is record enabled.

The problem is not nearly as bad as it was however. I can at least work around this in most instances whereas before I could not. (I have not tried exporting a mix down yet however.)

Hi Chris , sorry but what is MidiRT anyway? Google did not bring me an answer.

@vinark : I have no clue what WinRT MIDI exactly stands for, sorry. But I guess it’s got to do with Real Time (?) Midi on Windows.

Last idea for today: could this Asio Guard issue have to do with audio warp/ tempo editing ?

@vinark : I have no clue what WinRT MIDI exactly stands for, sorry. But I guess it’s got to do with Real Time (?) Midi on Windows.

As I understand it, this is the new MIDI over bluetooth feature of C12.

Last idea for today: could this Asio Guard issue have to do with audio warp/ tempo editing ?

Not in my case, sorry. While I did have a couple of audio warp edits in some of the audio files, I just tested it with bouncing all edits to new files, but nothing changed.

And then: I made those edits in C11 and since everything works there, it is most likely something else.

As I understand it, this is the new MIDI over bluetooth feature of C12.

Yeah that’s it, MIDIoBT, but hey let’s call it WinRT and confuse everyone huh.

WinRT is “Windows Runtime”. It’s a newer set of APIs that Microsoft exposes for creating software for Windows. It has new APIs for many things, including MIDI IO. The older MIDI IO APIs were notoriously problematic. The WinRT MIDI system has its own set of problems, though.

Windows Runtime (WinRT) is a platform-agnostic component and application architecture first introduced in Windows 8 and Windows Server 2012 in 2012. It is implemented in C++ and officially supports development in C++ (via C++/WinRT, C++/CX or WRL), Rust/WinRT, Python/WinRT, JavaScript-TypeScript, and the managed code languages C# and Visual Basic .NET (VB.NET). WinRT is not a runtime in a traditional sense but rather a language-independent application binary interface based on COM to allow APIs...

Even their own page on the subject doesn’t explain why it’s called WinRT.

Just a completely unhelpful name made up by some non-public-facing developer, and which will confuse many for years to come. You know… like…

I did see that.

And would you like to explain how this ever helps the end user?

I’ll try: there are two main ways to create MIDI IO software on Windows. The older way and the newer way. Microsoft calls the newer way WinRT. (Note, WinRT is much more than MIDI, and MIDI in WinRT is much more than Bluetooth support.) Cubase allows the user to choose which they want Cubase to use. This is good because both ways have unique issues.

Since WinRT is the name given by Microsoft, I’m not sure what else Cubase would call it. “Old-style” vs “New-style”? WinRT is probably the most accurate name for Cubase to use.

For the record, Cubase crashes when I use WinRT MIDI, so I suppose I’m glad they offer both.

Thanks for that. Very useful.

Considering in the thread above users are already confused, surely in the user interface it would be much better to use something like:

and leave lots of people not understanding what they are seeing?

User interface is supposed to help people, not confuse them.

To be clear, MIDI via Bluetooth is just one feature of WinRT MIDI. So calling it MIDIOverBluetooth would be very confusing. One can use WinRT MIDI without using Bluetooth at all.

OK, but WinRT seems to be about as unhelpful as they could have made it.