Late response but; for me C12 is performing alot better than C11

Steinberg power setting just sets the CPU to performance mode
it’s at power save by default, I believe.

performance mode just stops the CPU from clocking down so much

I notice an increase in CPU use (more than you’d expect) when I open a MIDI editor which, in some fringe cases, can be enough to tip the balance and cause audio dropouts.

But well, hope they’ll come up to something or there’s not so much to do with a broken DAW

Even a blank project with my Focusrite switched off shows audio activity 25%.
The weird and wonderful huh!!

Even a blank project with my Focusrite switched off shows audio activity 25%.

You must have something on the control room then.

HI
It is something i noticed when just editing a midi file from the Yamaha Genos.
I do not need any audio on whatsoever as the midi between Cubase and the Genos uses the Yamaha driver…
When i convert to wave i have Sonarworks and tonal balance sitting in the control room.
When i open a blank project and import my midi file, Sonarworks and Tonal balance are still in the control room, but i do not need them for editing and there is no audio at all switched on.
In theory, the audio average and peak meters should be on zero not showing 20-25% activity
When i have converted my midi to wave, i have 20 tracks and the Audio meters are still showing around 25%.
i tried out Korg Wavestate today and it does work perfectly without a glitch after testing for a while.
The meters do go nearly to 50% and i expect that as the wavestate must use quite a bit of cpu.
Render that to wave and should come down.
The funny thing with korg wavestate is that is shows high on the meters when idle and when you start to play the meter readings go down.
Well, That’s computers for you!!! Always does the opposite to what you think or want.
I would like to know when this update is coming. All gone slient.

All the Best
john

Exactly. I have been following a Windows DAW performance optimisation recipe for years, which I think is probably far more granular and effective.

Same here… From the very beginning, the performance indicator jumps like crazy… Even without any project… I have turned on Steinberg Audio Power but it does not give too much … In C11 it was much better… I don’t understand how you can spoil something that worked very well. I decided to buy a C12 but now I regret it… Even on the MIDI paths themselves (without VST plugins), the performance indicator jumps… This is really a tragedy…

I am facing a major issue with musical mode under Audio Warp. The warp markers are not selectable to move around in free warp. The cursor becomes like an eraser and erases all the orange lines instead of selecting them. I can’t manually add markers, it just gets added way ahead from where i clicked.
This happens only when there is a tempo change, before that it works without any issue.

Here is a short clip of this glitch.

I can also say that performance has taken a turn since upgrading from 11 to 12. I am running a 9th gen i7 and 64 gb of Crucial RAM. My C drive is an SSD. ASUS Prime Z-390 motherboard., Latest build of Windows 10 Pro. M-Tron Eight audio interface.

When is the first update due?

I noticed that when changing the drivers to GENERIC the performance indicator calmed down a bit but I still can not change the latency less than 20 ms so it is not good. I tried to connect my UR24C interface to USB 2.0 instead of 3.0 but there is no difference … Maybe it’s the fault of the drivers for the interface? I do not know… I just hope that soon the problem with performance will be fixed because you can not work in such conditions at all … Even simple uncomplicated projects that played beautifully on the C11, now work tragically on the C12… I don’t get it. This only discourages further use of Cubase. I don’t have poor equipment… I5 9600K, 16GB RAM, Gigabyte Z390 Motherboard, no external graphics card… Everything should work very well… I’ll wait some more time, maybe something will improve.

I don’t know how I did it but at least a few times I uninstalled the drivers from the audio interface and installed them back. I increased the latency setting a little bit and it kind of improved a little. The performance indicator no longer jumps. We’ll see how it goes… 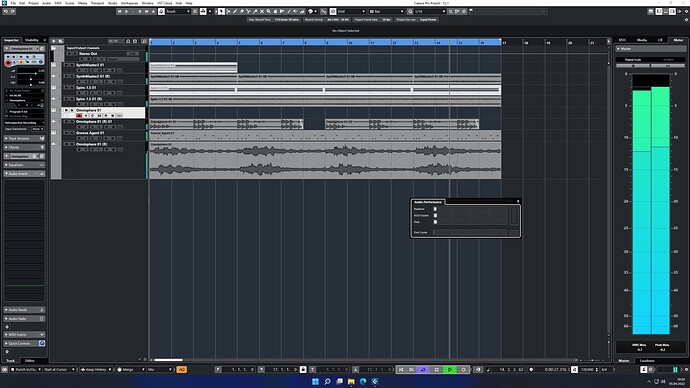 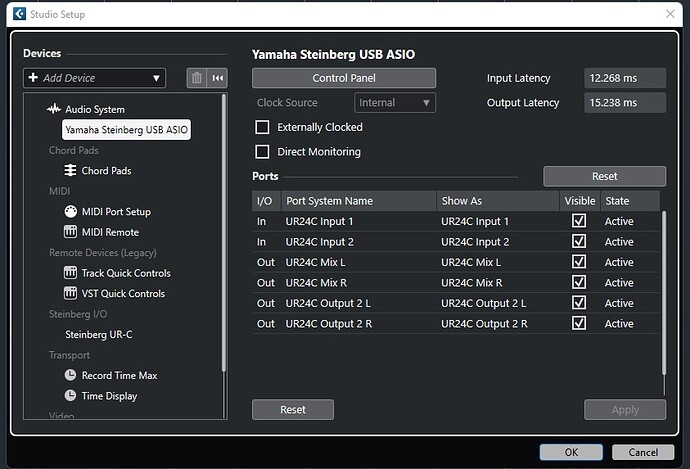 I have a I9 9960x on X299 chipset and compared Cubase 12 (Win11)with Cubase 11 (Win10).Used DAWbench from Dom Sigalas for this.The performance is by far better with C12 on Win11 (at least for me).There seems to have been a lot of improvement…regarding this…

I think I know why this is, as I might have encountered the very same. This is the process to repeat and potentially resolve the problem.

It seem that the free warp markers are now using the previous tempo mapping as a reference for their “place / locations / whatever” when it comes to free warping again.

I found that you can free warp at the previous tempo but you need to “bounce”’ the selection prior to moving it to the new tempo and THEN using free warp again.

That sounds very tedious when working on a big project with lots of tempo changes. I didn’t have this problem with cubase 11. Currently ive switched back to cubase 11 until Steinberg addresses this issue and fixes it in some upcoming update.

Can you eventually post your issue as a new Topic ?
It will have better visibility.
This one is about Cubase performance issues, not functionality related issues.