Here is a sneak preview of what’s coming with Cubasis 1.3 among other things.
We hope you like what you can see on the screenshot.

This update is scheduled to be available mid of April. 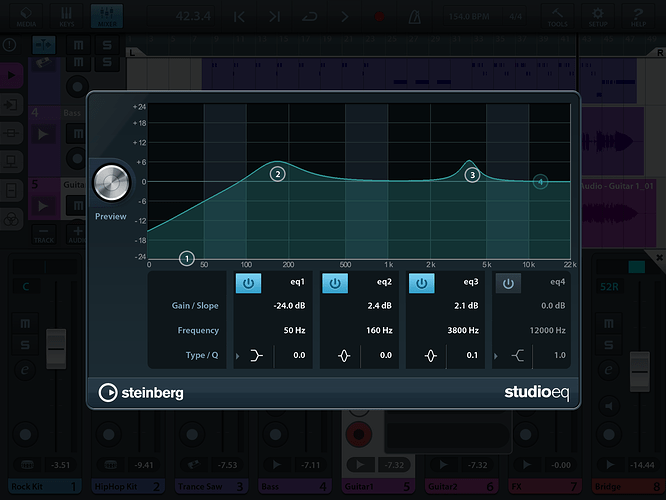 A real EQ! Oh yes, me like! With automation I suppose?

Great news! A four band parameter eq! That was on the top of my wish list, especially for the stereo out track!

Can’t wait to see the others things. Keep on storytelling!

There’s also a track named “FX” in the background… I wonder what that means.

Edit: I just realised, it’s probably some instrument-FX stuff… But you never know…

Sweet. Thanks guys (hope it’s not an IAP

(hope it’s not an IAP

No, it will be a free update!

But please, tempo track in the next release

Count me in ! Looks really useable…

Seems Apps require an accelerated update cycle … at least buyers have become accustomed to that. I’m impressed to see SB stepping up to the plate on that count!

But please, tempo track in the next release

I world rather have an input channel for my audio recordings, …if I can’t have botn.

Also would very much like to be able to view/edit/automate MIDI cc messages after recording.

In terms of sounds, the built in Cubasis sounds are very outdated, and there are no built in synths. Compared to the presets, power and flexibility in other apps (even desktop Cubase, and many iPad apps), Cubasis falls far short. How about offering lite versions of synths available in Cubase, or maybe padshop, etc., as add-on purchases?

I became painfully aware of the poor instrument quality when comparing directly with Garage Band, and an iPad notation program (Notion) that has built-in instrument sounds. Notion instruments are in many ways superior, and keep in mind these are stock sounds in a NOTATION program, which are typically some of the worst. Almost all the Garage Band instruments leave Cubasis in the dust, for only five bucks.

Does it have an analyzer?

We hope you like what you can see on the screenshot.

Can’t your GUI designer move to the Cubase dept. to help them out in creating a proper, clean and usable GUI?

Is it possible to sequence and record external hardware Midi modules and synths yet? I mean with no limitations such the lack of program changes, etc. Please, the included set of sounds is really poor, and it’s not even a standard GM2 set…

It’s really difficult to me to use this software to draft my songs with those default instruments.

Will there be (or is there already) updates that allows cubasis to support multiple outs on the interfaces already available?

Would be really great when thinking about live setups when using backing tracks, sending click track to one out and stereo tracks to another output etc.

Would be great to know.