I am trying to connect multiple cubasis 3.3.1 tracks to different voices on yamaha mx88. Where can I find the instructions?

Thank you for your message and welcome to the Cubasis forum!

To get familiar with Cubasis, please check out our Getting started with Cubasis tutorial.

In addition, I’ve found another YouTube clip where a user seems to use the Yamaha MX88 alongside Cubasis. Please find the clip right here.

Thank you for the reference. That appears to record the MX88 as audio, but unfortunately not as midi. Perhaps a future feature that for now is only available using cubase.

I was told the recommended way is the method Doug from The Sound Test Room demonstrates: 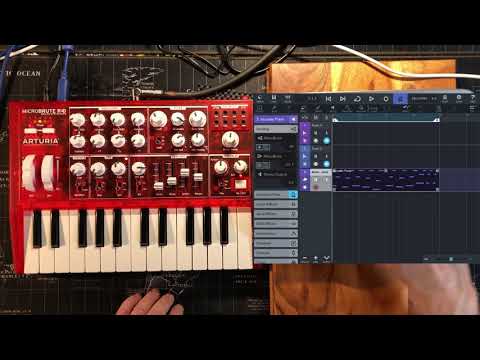 This means you have two tracks per instrument so to speak, a MIDI and Audio one. Personally I think this is cumbersome too.

I suppose in case with the MX88 (I own a MODX myself) you need to set up multiple of those midi tracks for one summed return audio track. Not sure if the MX88 can feed back multiple audio channels over USB into Cubasis, probably not.

You can also use AUM in the background with IAA connections to Cubasis, but I found that to be unstable. Jakob Haq demonstrates this method here: Record from AUM into Cubasis 2 & 3 | IAA Output Routing | haQ attaQ - YouTube

I wish Cubasis would offer the same possibilities here as Cubase, but this isn’t the case yet, and it might not be for a while. So the workarounds are currently the only options.

Thank you for your message.

Thank you for the reference. That appears to record the MX88 as audio, but unfortunately not as midi. Perhaps a future feature that for now is only available using cubase.

It is technically not possible to record the MX88 sound itself into Cubasis as a MIDI track. This would require the MX88 to be available as a separate AU plug-in on iOS for example.

Nevertheless you should be able to record the MIDI events itself, alongside to the played MX88 sound as an audio track in parallel.

It is technically not possible to record the MX88 sound itself into Cubasis as a MIDI track. This would require the MX88 to be available as a separate AU plug-in on iOS for example.

I’ve been searching for an AUv3 that can exactly do this, but haven’t found anything yet, which is a shame. Are you aware of any AUv3 that is able to map a (selectable) hardware audio input? If not, is there something like that on the development list for Cubasis and if not, could it be suggested for development? Thanks!

I am unaware of any options for iOS currently.

But the current option to record a MIDI event and the MX88’S audio output should do fine too, or not?

But the current option to record a MIDI event and the MX88’S audio output should do fine too, or not?

However in case of a multitude of hardware instruments you’ll end up doubling tracks, which makes it very awkward due to the number of tracks, that still need to be grouped together so one has at least some chance to stay organised. It’s no fun working like that really. All it would need to solve is either an AUv3 that can map an input track as if it was an AUv3 instrument, or Cubasis would need to be made able to map it itself, the way Cubase does.

This all is especially the case if one works mainly with MIDI tracks, like myself.

Some people will say that you’d be better off using a computer DAW and I can understand that argument, however I’ve been there and done that and I very much prefer working with the iPad.

I also understand (and appreciate) Cubasis needs to remain a somewhat easier solution than a full fledged DAW like Cubase for example. However there are many people like myself that use Cubasis and also dabble in external hardware synths (many using AUM for that) and we just would like Cubasis to make this a little bit easier. If this could be implemented that would really be appreciated by many.

Agreed it would be helpful to have separate midi tracks driving different voices on a mx88 rather then audio, allowing for voice switches as needed. Cubase 11 artist on my laptop(windows 10) does it, but the laptop is not as compact and user friendly to manage/configure. An ipad + motu + mx88 would be very easy and powerful for most of what I do.