Again - thank you all for your input and expertise. Very glad you find it usable. Where I am with it? The lack of intuitive anything in Dorico, the epic user unfriendliness, and the huge amount of time I’ve already invested in trying to write a simple score, the non-functionality of it, and what a mess it is (Dorico imported a MIDI file and put all the piano bass notes on a treble clef, once I figured out how to remove an eighth note rest in 3/4, Dorico proceeded to give me a measure with 2 1/2 beats in it ), Thus my review: will be Stay clear - it’s very rude. Puzzle solvers, programmers and research fanatics may like it. I guess I expect software to be better than what it replaces (Paper and pencil).

Well, most people here will obviously disagree with your review (me too!). It’s a completely unique piece of software and a game-changer.

I personally hope that you will give Dorico a second chance. And if you need help, the friendly users and development team(!) will always be here.

I really wonder what you expect to intiutively happen when you"delete a rest"? Should the previous note extend over it? Or the following? Or should they move in their place?

once I figured out how to remove an eighth note rest in 3/4, Dorico proceeded to give me a measure with 2 1/2 beats in it

Exactly the same behaviour will occur if you delete a rest in Sibelius or MuseScore!

Dorico imported a MIDI file and put all the piano bass notes on a treble clef,

Did you check to tell Dorico it was importing a Piano track? D4 has 5 different options for how to distribute notes between staves and voices during MIDI import.

Well, it’s clear that Dorico is not for you. (and I’m starting to get the feeling you are now just trolling the thread, so I will say good bye and good luck)

Hi Gene, if your primary experience with Dorico so far has been working on a file that originated as an import (either XML or MIDI) then it’s possible you’re encountering slightly odd behaviour, because imported files can behave quite differently to native Dorico projects due to the quirks of import and the settings that can come along with that.

Am I right in thinking you were working through the First Steps guide for new users when you encountered an unexpected rest? Perhaps make yourself a hot beverage of your choice and sit down to watch John Barron’s Discover Dorico session where he works through the First Steps guide live, with accompanying commentary and discussion. It might help you? 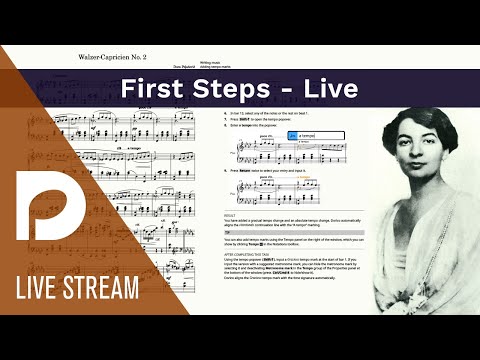 Apologies if you are already well aware of this, but just in case you are not: MIDI files don’t contain any information about the instruments that the music within them is intended for.

Some MIDI files may conform to the General MIDI standard, in which case you can divine some things (e.g. that tracks that use program 0 will play back with the Acoustic Grand Piano sound, and that tracks that are pointing at channel 10 will use General MIDI percussion), or they may contain helpfully named tracks (e.g. your track might be called “Piano” because somebody thought to give it a name in the program that produced the file – though that is simply a bit of free text and could be abbreviated any which way, or written in any language… and good luck if you’re writing in a non-Roman alphabet, as MIDI files don’t have a way of specifying what character encoding text items are in, so you can’t tell which codepage you’re meant to use to interpret those names, etc. etc.).

What this means is that programs like Dorico have to do a lot of guesswork to determine how best to interpret the data in a MIDI file. This is why one of the big new features we added in Dorico 4 is a sophisticated dialog that allows you to see what it has worked out for itself about the MIDI file and to change it if you need to. An introduction to that feature can be seen here: 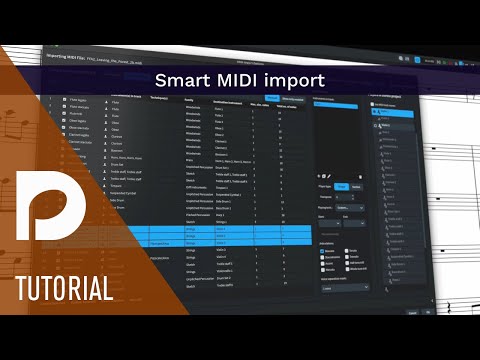 When you open a MIDI file, you can see which instruments Dorico has guessed it should use. If you know the MIDI file uses the GM conventions, you can activate an option in the dialog that will make Dorico reconsider the file according to those conventions. Otherwise you can look at each track and how Dorico has interpreted it, and change that interpretation if need be.

Believe it or not, Dorico actually has the most sophisticated MIDI transcription of pretty much any software on the market and can separate polyphonic voices in keyboard textures automatically, which is a totally unique feature that you will only find in Dorico – but it needs to know that the MIDI data you are giving to it should be interpreted in that way, and that’s what the MIDI Import Options dialog allows you to do.

…once I figured out how to remove an eighth note rest in 3/4, Dorico proceeded to give me a measure with 2 1/2 beats in it ).

If you use Edit > Remove Rests, then Dorico will indeed remove that rest and if you have only one voice in the music at that point, then you will end up with missing time. As others in this thread have explained, rests in Dorico aren’t simply graphical symbols, and they represent the absence of a note or chord. If you want to get rid of a rest, the best way to do that is to replace it with music, and if you had, for example, shifted all of the subsequent music backwards, the rest would have been replaced by the start of the shifted passage, and Dorico would have rewritten everything to show the rhythm and meter clearly.

Dorico may not be for you – but it is developed by a team of musicians (many of us with extensive background in composition and performance) and it is used by tens of thousands of musicians in every field of music you can think of. There are lots of other options for music notation software on the market if Dorico isn’t to your taste, but I hope you’ll take the time to give it a further look. You will find plenty of help here on the forum if you ask for it.

I can sympathize with gene_abraham. The first time I opened Dorico 1, I tried to just start writing music and quickly realized that my intuition was not going to let me discover some basic operations such as space barring for rests. Or, that you don’t delete rests, you remove them for which I now have a dedicated key command.
A half hour of skimming any guides that were available gave me enough information to adjust my prejudged “intuition” and now, I, like many thousands of others find Dorico fast, friendly and dare I say, intuitive. And I’m very far from a computer programmer.

As you imply, @lafin, when learning new software it’s probably best to retire the word (and concept) “intuitive” altogether. In practice it usually means “just the way it works in the software I’m already familiar with,” and can be a hindrance to learning a new way.

Hello Gene, welcome on this forum!
I do appreciate the frustration (may is use that word?) you seem to experience.
And I remember, after having used Finale for 20+ years, it took me about half a year experimenting with Dorico 2 before I decided: yes, this is the better product. And yes, Dorico 3, 3.5 and 4.0 have become much better (while Finale has been for a number of years in a virtual stand-still.
And yes, I remember that some things, like rest handling were “non-intuitive”, that is, I expected that deleting a rest would move back all the next notes of the same bar, and leave the rest untouched (which I found out not to work that way). It took me some time and learning process before I understood what a rest in Dorico really means, and how it behaves in different conditions.
But in hindsight: the solution that Dorico choose to handle rests is, in fine, quite logical, once I took the (small) effort to understand it. The documentation is well written - thank you Lillie - the forum has a lot of helping hands, full of expertise, and the development team is just amazing - thank you Daniel and your team.
In a complex environment of making sophisticated scores (in my case orchestral scores with 40+ instruments) , you realize quickly that the software used is important, but the support of documentation, forum and development team cannot be underestimated.
So, I suggest to do yourself a favour: give yourself time to wander through the Dorico features, some of which you may feel to be non-intuitive, but they have in general excellent documentation, and otherwise: the forum and the development team are there really to help you.
Kind regards, Robrecht

A rest is not a thing, it is just evidence of the absence of a thing!

This profound description of a rest is worth contemplating.

I think anyone who has written out music by hand, as I assume Gene has, will find this definition takes time to sink in. After all, a rest takes as much effort as a note to write on paper: it is an real object in the score in this sense. Though it may indicate a space in time where there is no note, but silence; it doesnt look inherently negative.

I think this might be discussed somewhere early in the manual. The second mention of the word “rest” – on page 24 – dives much deeper into what Dorico does to rests, by which time the reader has invested quite a lot of reading time.

I make this suggestion, because it also took me quite a while to appreciate that you dont need to bother about rests in Dorico, they generally look after themselves. That was, until I started entering contrapuntal keyboard music where rests are not used between entries of voices. Then I had to pause to learn the unintuitive ways of hiding, and showing, the rests in such circumstances.

Some years on, and I cannot understand why one bar of triplets with 3s copies differently from one where the 3s are hidden (unless you show the 3:2 signposts). I mean, with or without the signposts being visible, the second bar is still a bar of triplets to me. But in this, and other aspects of musical notation, Dorico thinks otherwise.

I understand totally why Gene finds these differences difficult to come to terms with.

Dorico is sometimes a bit like Alice in Wonderland, where it says:

Stephen Covey once said, “We see the world, not as it is, but as we are.”

Probably a valid observation, but disastrous when dealing with a computer.