Yes, if you create the appropriate kind of instrument in Setup mode; the various low wind and brass instruments have different variants that show different clefs in score and part layouts, and when shown at concert vs. transposing pitch.

Oh wow I totally missed that, perfect! Thanks!

Hi @Daniel, I am using a brass band template.

So we have transposing instruments in Bb or Eb treble clef. But when I switch between transposing and C display in “Write” mode, the clefs don’t change.

The music for the basses (i.e. Tubas) in Eb and Bb are transposed correctly down some octaves on leger lines, but still in Treble Clef.

I think there’s two bugs here.
Firstly, the tenor instruments don’t appear to change transposition correctly (they should be written a major 9th higher than sounding pitch).
Secondly, the clefs should change.

I may be missing something though. Is there a way to customise the clefs used in transposing/C scores? For example, I often like to have Tenor (aka Alto) Horns written in Alto clef in a C score.

Sorry not to have responded sooner. In the below, when I write C4, I mean middle C.

As far as I can tell, the only real problems here are that:

Hi, thanks for the reply.

Actually, I would expect concert-pitch for tenor and bass instruments (tenor troms, baris, euphoniums and tubas) to be written at pitch in the bass clef, as for orchestral and wind band music (though trombones are also usefully written in tenor clef, of course, and that’s really useful when transcribing orchestral parts).

(At pitch also implies Alto clef for alto horns, but I’m probably atypical in that, also being a viola player!)

The bass trombone needs to be in B.C. anyway, and it’s really confusing trying to match up bass trom and tuba parts if they’re in different transpositions one or more octaves apart.

I don’t see any advantage in writing everything transposed up the octaves (unless you’re unable to read bass clef, in which case you probably aren’t a typical user of this kind of tool!)

In a way, there’s no set “rule” because Brass Band parts are always written in transposition with the exception of bass trombone and sometimes the tenors. However, the scores are occasionally written in concert pitch, and reduced scores are often in piano staff (either in Bb or concert).

For arranging etc. though, I would prefer sounding pitches to be displayed.

Sorry not to have responded sooner. In the below, when I write C4, I mean middle C.

As far as I can tell, the only real problems here are that:

Thanks for the further feedback. We will do some more work on these transposing instruments and hopefully cover all the bases in the next update, all being well.

I think some work was done in the last update, but my trial has expired and I can’t test it out any more. Please could you outline how (if) these features have progressed?

All of the horn transpositions were added in Dorico 1.0.30 at the end of February.

Still I can’t solve the problem with the tenor horn. In the score it is bass clef - which is fine - but in the part it should be treble clef and in Bb…
When I choose Tenor Horn as an instrument it transposes the “d” in bass clef to a “b” in bass clef… A tenor horn is a Bb instrument that should be notated as a tenor saxophone.

You can create an explicit bass clef at the start of your tenor horn part, and then use Edit > Clef > Transposing Layout to choose the treble clef as the clef to display when viewing a transposed layout.

Macerio, the “Tenor Horn” that Dorico knows is not the “Tenorhorn” that you (and I) are thinking of.

The Tenor Horn here is indeed in Eb and is used in brass bands (if I remember correctly).

Ah… that’s new to me. I fixed it by using a tenor saxophone in the sheet and a horn in playback. Not ideal but works so far…

UK tenor horn = USA alto horn = German Althorn (in E flat).
UK baritone = USA baritone horn = German Tenorhorn (in B flat). Well, approximately equal - they are probably not quite identical instruments but they are at the same pitch.

USA “tenor horn”, if the term is used at all, probably means a French horn in F. But French horns are NEVER used in British brass bands, and except for military bands the UK doesn’t have strong tradition of brass-and-wind bands like the USA does.

The easiest way to solve this is like it is handled in Sibelius and Finale: you could select a clef and transposition independently…

I already have the next issue: My flow headings in the parts have gone - but not in all parts. The flute part has it, all other parts (clarinet, alto sax…) don’t have it - but they all have the same master page without changing anything…

Your part layout must not be transposing. I get this by default: 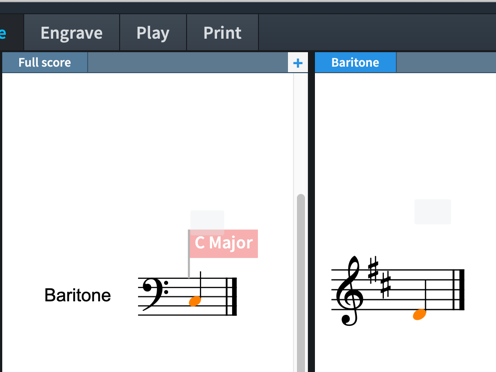 Go Edit > Transposed Pitch from the part layout. Then check your parts carefully in Layout Options; it might be that you’ve inadvertently saved defaults that have parts in concert pitch.

Oh, unless you’ve been fiddling with the clefs at the start of the flow. You can input whatever clef you like, then right-click it and tell it how to display from the Clefs submenu. I can’t see how this is any harder than how Sibelius does it 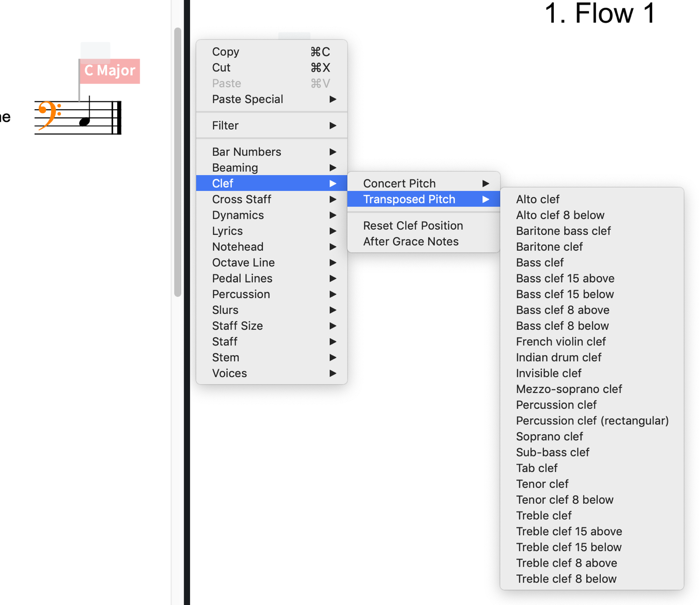 that’s perfect - as you see, I’m a real beginner in Dorico. Thank you so much!

maybe you can help me with this as well:

By the way, I like the approach of Dorico a lot - makes it really easy to produce worksheets! In Sibelius there is no way to do that - have you ever placed pictures in a part layout in Sibelius - that’s a real fun if you then open the score…