I’m not sure what’s going on here: I exported two part layouts as PDF. Adobe Acrobat tells me they’re the same font and size and weight. But they’re clearly different. The violin part is darker than the horn.

I think I’m going crazy!!! Anyone?

You aren’t crazy. I opened both into their own tabs and arranged your copyright notice in exactly the same spot on my screen and when I click back-and-forth between both of them it clearly changes weight.

On my ipad it almost looks like there’s a drop shadow. What font is this on your computer? It’s not on my computer so it’s defaulting to Abadi condensed.

There’s some sort of font embedding issue with the files. For some reason there are only 6 fonts embedded in the PDFs you posted, but when I open your Dorico file and export to PDF there are 7 fonts embedded in the resulting files. I’m not sure why, but Minion Pro Bold isn’t embedding in your files. Also, the TTF versions of Minion Pro and Minion Pro Italic are embedded in your files, but the OTF versions embedded when I exported. Do you maybe have multiple versions of Minion Pro installed, perhaps both the older TrueType files and the OpenType versions? If so, maybe Dorico is somehow getting confused as to which to embed.

Thanks Todd. I admit I don’t understand what you wrote. I’m not a font expert. I just downloaded Minion Pro and installed it, last year. And I’ve been using it for pretty much everything (probably 500 projects to this point).

I’ve seen this issue here and there but didn’t realize it at the time. Not sure what to do next.

You could uninstall Minion Pro completely – make sure nothing remains. Windows can act kind of funny with font files, especially when they were installed several times. Then reinstall just the otf files.

Thanks Todd. I admit I don’t understand what you wrote. I’m not a font expert. I just downloaded Minion Pro and installed it, last year.

Here are the variants of Minion that are embedded in your file. Note that the font names all end with .ttf, and Minion Pro Bold is missing entirely: 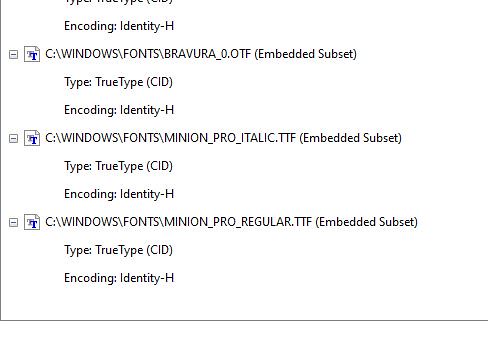 Did you download Minion Pro from Adobe? Another pay site? A cracked site? I wouldn’t be surprised if it was officially released as a TrueType font at some point, but I thought all the Adobe “Pro” versions of any typeface were only released as OpenType. I just went back and checked my old CS3 CDs, and it’s .otf on there. (I don’t have an CS version older than that anymore to check.) When I open your Dorico file and export, here are the variants that are embedded from my system: 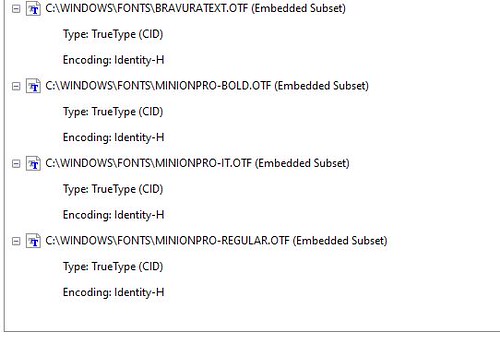 Also, when I switch back and forth between PDFs from your Horn part and one I exported, the line spacing on the cover page moves slightly too. I’m not sure exactly what is going on, but clearly the different versions are being treated differently.

If you go under Windows/Fonts, click on the Minion Pro family, then click Properties on any installed variant, does the file name end in .otf or .ttf?

Thanks Todd. I downloaded it here: https://www.wfonts.com/font/minion-pro

I hate to break it to you, Dan, but Minion Pro ain’t free…

I hate to break it to you, Dan, but Minion Pro ain’t free…

I’m finding at least a half-dozen sites where I can download it for free. They don’t look like illegal sites to me.

Well, in a different sphere, YouTube isn’t an illegal site, but there is plenty of illegal content on it. And YouTube is much more likely to be visited by “copyright police” than a font site!

I honestly didn’t know it was illegal. Yikes. And this is related to the issues I’m having?

It seems likely. I suggest you purchase a license for the Adobe Minion Pro OpenType family from e.g. MyFonts. (You can buy directly from Adobe but of course they try to get you onto one of their subscription products even when you’re simply trying to buy a font…)

Dan, you appear to have downloaded Minion from a website that
a) doesn’t know whether it’s called wfonts.com or sharefonts.net
b) is copyright 2016
c) has Terms or Service that clearly exclude any commercial use of their fonts

Alarm bells are ringing, at least for me.

A bit of research shows that it’s not free, but it is bundled with some (non-free) Adobe software products.

The complete version (65 styles) costs about the same as a full Dorico license, from Adobe’s “preferred reseller” (https://www.fontspring.com/fonts/adobe/minion-pro according to Wikipedia) but subsets are available cheaper.

It seems likely. I suggest you purchase a license for the Adobe Minion Pro OpenType family from e.g. MyFonts. (You can buy directly from Adobe but of course they try to get you onto one of their subscription products even when you’re simply trying to buy a font…)

Yes, Minion Pro is only available as OTF from Adobe. Sites like wfont are very dubious, and often have crude TrueType conversions of commercial fonts, as well as unlicensed copies for download.

If you’ve bought any Adobe product ever, you should have some Minion Pro fonts, as well as many others, as part of the bundle.

If you’ve bought any Adobe product ever, you should have some Minion Pro fonts, as well as many others, as part of the bundle.

Yep, you could easily buy an old version of some Adobe product on eBay for much less just for the bundled fonts. I know it and many other fonts are on my CS3 disks. It’s probably on earlier versions of Creative Suite and standalone products too.

Here’s a list of the fonts included in Adobe Creative Suite 1, 2 & 3:
https://www.adobe.com/products/type/creative-suite-3-installed-fonts.html

There’s a Windows version of CS1 on eBay right now for $15.50. You wouldn’t even need to install it, just go to the disks with the fonts and install what you want. At least you know they would be the legit versions.