I have a mixture of questions regarding best practices for divisi labeling. I personally hate the idea of feature requests, but I must admit I have included one here.

So, when entering simple string divisi à 2, it’s pretty common to be labeled with a centered divisi label as below. Older music usually places this staff label inside the staves, but it’s more common today to have it outside the staves. 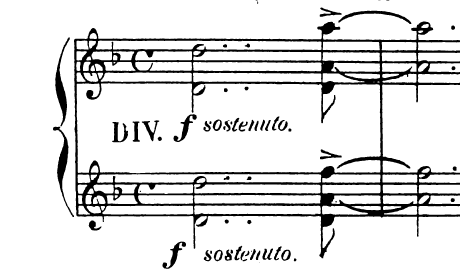 I can replicate this by making a two-part section divisi (without names/numbers) and giving it the group name “div.”. As is common in an instrumental part, I have staff labels turned off, so for this particular divisi I set the Show Group Name to “Show”. And voilá. 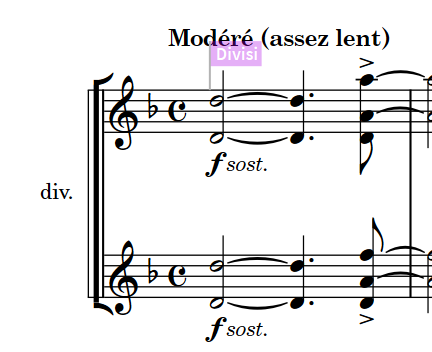 However, I realized that this combination of settings will show “div.” on every system which the divisi applies if it is spread across multiple systems. Upon looking for a good way to deal with this, in general I observed there are less conveniences afforded toward Group names versus Section names.

In Layout Options>Staves and Systems, all three Divisi labels options only work with Section names. So while it’s very easy to achieve the following, which has text for each staff… 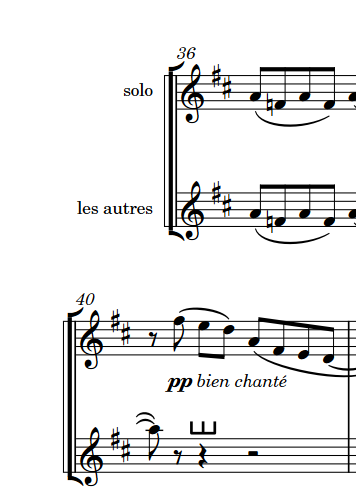 …if I want text that is centered and applies to the first system only, I have to have a more heavy-handed approach: after searching the forum, it seems like people have suggested copying the divisi flag, pasting it immediately after and changing the settings so that the Group label is subsequently hidden. I can certainly get away with this in a pinch, but it seems an unnecessary duplication of work.

So, on to the question. Is there a better way of having a centered divisi label that I’ve not found? In many ways I understand I’m kind of abusing the Group name to get what I want, but I’m unaware of another way. One might suggest I make use of Section names rather than Group names, and in some situations this would work fine, but sometimes it doesn’t—in the example above, if I name each section “div.” it’s not clear that it’s the entire section which is divisi, rather than each individual line—wouldn’t want them to divide the double stops. And while I could number the divisions (and this is Dorico’s default when adding a divisi), I must say outside of contemporary music it’s highly unusual to number simple string divisi.

For the future, it would be great if the divisi label options in Layout Options>Staves and Systems either had the same options available separately for Group names or if those same options worked for both Section names & Group names. Probably the former would be more useful and flexible.

If you set your divisi as follows, you can get the “Div.” label showing on the first system only, above the lower stave. It won’t centre between the two staves automatically but you can always drag up in Engrave mode. 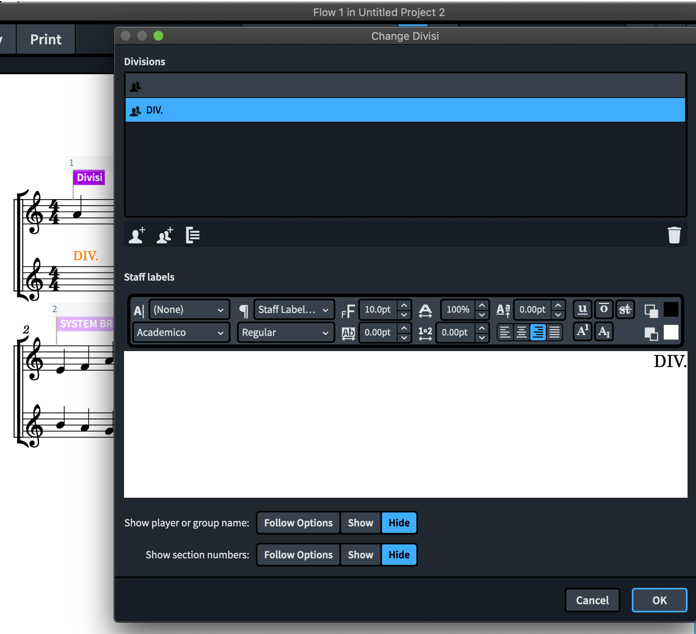 Leo, thank you for this. I have experimented with this a bit and it’s not perfect but is certainly worth having in the toolbox. This workaround is most tidy if the divisi exactly occurs as a system break, as standard practice is to clarify the division of lines at the beginning of a system, even if that isn’t where the actual division takes place (Strauss parts are wonderfully clear in this regard). After that, it becomes a bit more work. Six of one, a half dozen of another.

Thankfully, I’m early enough in a project that my choice in this matter won’t be terribly necessary for another month or so, and while I hope there’s some more options available for this in the future, I’d rather have two options than one when it’s time to cast these string parts off.

There’s nothing to stop you dragging the label left or right - if it helps you to have the divisi change midway through a system you could still drag the label to the left end of the system.

Yes this is true. I’ll experiment with this more. Thanks much!