Divisi indentation (and other problems)

How do I get rid of indentation of divisi passages (see attachment)? I (and publisher) would prefer to have left hand side aligned (all systems would start at the same distance, so that there is room for divisi text). I would prefer to change width of the music frame than indenting all unisono staves by hand.

Divisi seems to be really tricky to handle if it starts after first beat and has slurs from unison passage. I hope this issue could be solved soon. Ties in mirrored music also behave badly…

I also had problem with solo+altri situation. When I added solo+altri after unisono passage, I noticed that it is altri stave that Dorico adds, actually it would be better solution that unisono passage would continue in altri part (as it actually is!) and solo would be be added above. And if solo is started a bit later in the system, solo stave should have bar rests instead of mirroring altri.

You probably have one or two of those checked in that particular layout.

Claude, I think it’s a bit more complex than that, or I would’ve answered sooner.

I believe the OP wants all of the left edges to align vertically, whether they have a staff label or not. I can’t think of an easy way of doing that: there are minimum indents for staves that DO have staff labels but I don’t think it’s possible to set a global indent for staffs that don’t have labels.

You’re correct. I jumped the gun!

I don’t quite understand why this works, but try setting this option: 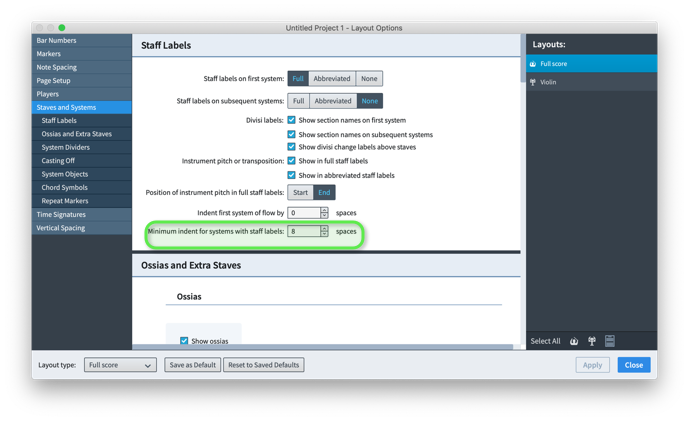 I found that 8 spaces gives me this:

As to the other points you made in your OP, I don’t think there’s anything there that the team aren’t already aware of.
If a solo starts midway through a system you really need to add the Divisi at the start of the system. That way you can have rests in the solo stave.

Has that setting always been there?

I’ve just found the setting in 1.2. It doesn’t seem to work on staves with no staff label, there.

Well, I think it has been there for quite some time, yes… But I don’t remember it said “with staff labels”, isn’t this confusing?

Well, I think I prefer the current behavior, but maybe some editing could be done to “with staff labels” in order to be more accurate

[Edit completely OT] Congrats on your +3000 posts and new status!

Oh! I hadn’t noticed! I’m not sure how I feel about my new “status” - I should probably take it as a sign that I’m not taking my current (“mature”) studentship seriously enough…

How many posts are necessary to reach Grand Pooh-Bah status?
(Congrats, Leo.)

You’re well on your way yourself Marc!

How many posts are necessary to reach Grand Pooh-Bah status?
(Congrats, Leo.)

3000, apparently.
If “Pooh-bah” is defined as “a person having much influence or holding many offices at the same time, especially one who is perceived as pompously self-important.”, then:
Re: the “influence” bit, it transpires I was quoted on this forum before I’d even joined it.
Re: “many offices”, I’m a working musician so fairly itinerant, not to mention the definition of “portfolio career”
Re: “perceived as pompously self-important”, you’re probably bang on the money, unfortunately…

Shouldn’t the rank after Senior Member by Senile Member?

Pooh-Bah’s official title was “Lord High Everything Else”, of course. (That is, everything except Lord High Executioner)

No, I was thinking Grand Pooh-Bah would be a level past Grand Senior, maybe a 5000 threshold.
(I do like the Senile Member designation, though. Maybe that could kick in at 6000.)

If you know your Mikado, we have to work the rank of “second trombone” into the system somewhere as well

I see from https://www.steinberg.net/forums/memberlist.php?mode=&sk=d&sd=d#memberlist that there is a “Forum Elder” rank that only one member has ever achieved.

My least favourite job is tidying/cleaning. My least favourite musical job is repping for G&S. It’s more boring than cleaning and the end result’s less satisfying.
Lionel Bart, sure. Rodgers and Hammerstein, why not? Adam Guettel or Jason Robert Brown, what fun! I had to do some George Benjamin last week and that was a hoot.

Anyway, back to Divisi indentation:
Daniel, when you get to this: it looks like the behavioural change between 1.2 and 2.x is undocumented - I can’t find any mention of it in the Version History. If the current behaviour is deemed unintentional, could it be left as an option when the old behaviour is added back in, please?