Yes, it does pick up the tempo (incl. start/stop from the host). It is always in sync and loops the clips parallel to the Cubase arrangement. I use it mostly for beats. So I have the beat playing from the clips while I’m composing the rest in Cubase. I have Machine Jam which I use to selected the clips to play, without the need to open the VST. A clip could also have an audio loop which is automatically in sync as well. I do EDM stuff…
For me its very efficient and almost replaced GA5.
Maschine is quite complex, but powerful. A clip can have multiple samples of course and audio loops in parallel. It can also include sounds from other VSTs inside the same clip…

Yeah no. I just tried it. It doesn’t do what I was talking about. I mean if it did everyone would be talking about it and there’d be loads of YouTube videos on it. It would basically turn cubase into ableton.

What I said was can you open a maschine VST, import a sample into each sample slot and they all automatically tempo and pitch sync with each other in time with the tempo daw. They do not. Furthermore you cannot drag and drop from cubase into the VST etc etc. All it can do is trigger loops. You can do that in cubase. Why would you need to open a maschine VST just for that.

I recorded a video demonstrating my workflow: 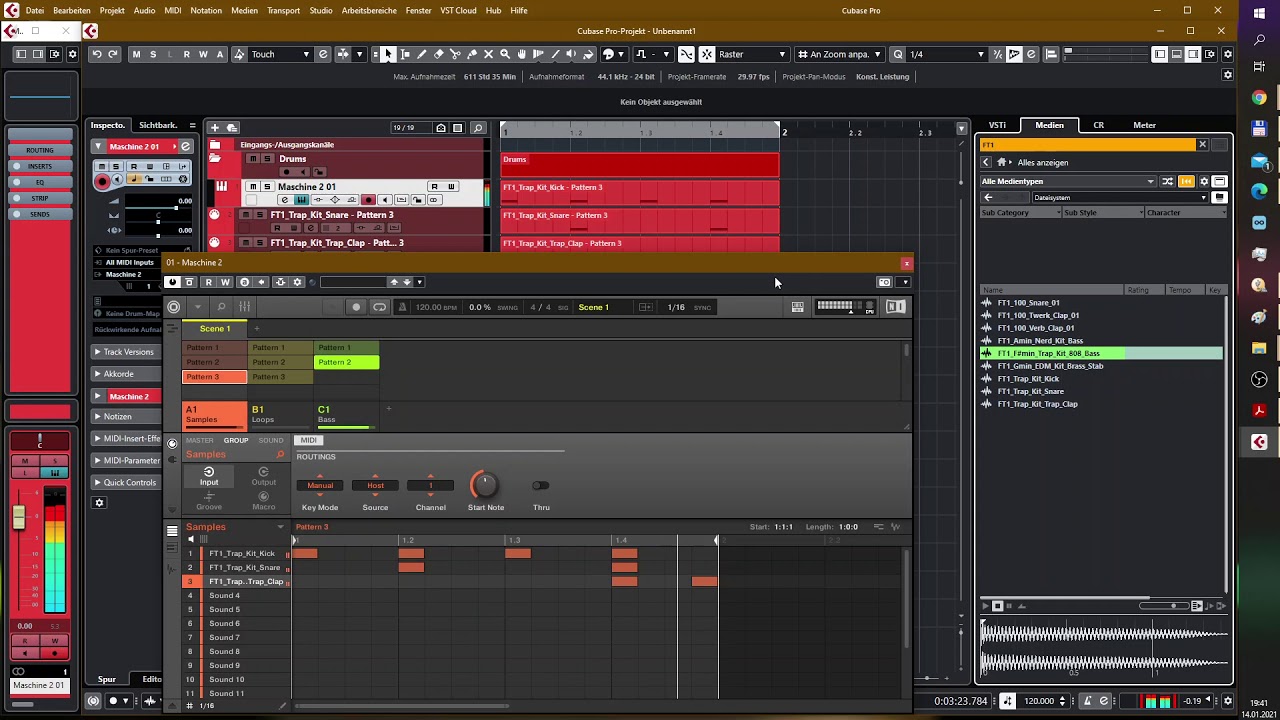 I admit, it is not straight forward.
Maschine works not the same way as Ableton regarding the clips.
The loops are automatically in sync but not automatically transposed.
And yes, I’m also not happy with the fact that Steinberg locks their libraries to their products only. Resulting that Steinberg loops can’t be dropped to any non-Steinberg product. It works for your own imported content that is available as files on the filesystems.

Interesting. Thanks for the video. I didn’t realise you could convert the midi into audio within the machine clip, which then means it follows daw tempo. That’s very useful but like we both know it can’t be key transposed unfortunately.

Other than the midi to audio aspect that you showed, I pretty much have the exact same workflow. The audio to midi aspect of it can just as well be done in cubase really with musical mode etc, but the advantage of doing it in the maschine VST is for the use of clips and being able to mix and match instantaneously for immediate idea generation and a scratch pad.

This has given me food for thought. I might play around with it a bit more as this potentially has opened up a new set of cool work flows for me (even though ideally I like to keep everything in one place and work as fully in the daw ie cubase, rather than a daw within a daw ie maschine VST in cubase. But interesting none the less. Thanks and your English is great by the way. Very talented.

Not really, if all the 3rd party hosting plugins were able to drag & drop elements from cubase into them, sure…
But if you have build a bunch of synths, audio or whatever and want to do some complex macro business or some crazy routing etc, you are kinda stuck or left to rebuild everything in a 3rd party vst which would take hours and break everything in your track that you already did…
It’s not a solution at all in my eyes.
We are definitely missing a few elements to be able to do some really custom & creative work with ease in CB…

LoveGames your like symbol has disappeared, otherwise I would have clicked.

Cubase still looks like I should be waiting for my dial up modem to finish connecting to AOL… It’s a total visual nightmare. But under the hood she’s ahead of the curve.

Cubase still looks like I should be waiting for my dial up modem to finish connecting to AOL… It’s a total visual nightmare. But under the hood she’s ahead of the curve.

I never get these comments… to me it’s the most modern looking DAW? maybe change your screen monitor settings?

Yeah, don’t get it too, especially compared to some other popular daws.

I very much like the new look of Cubase and it’s plugins. Modern, crisp, high res, clearly laid out, pleasing on the eyes, smooth zooming/scrolling, no total flat-design-madness,…

Yes, I find the other DAWs look more like a tacky iPad App - not at all what I want to be looking at in my studio on my screen. I would say S1 is the only one that compete with Cubase, but, still like Cubase more

Partly disagree…im pretty expert on Live now and i still think it looks hideous and is still hard to quickly identify things quickly for editing…it’s overall generic look i think doesnt help it at all…its possible to have a clean look and still the main workspaces look distinctively different. I think Cubase has that 100% right

However on the clips thing, Cubase desperately needs the ability to at least trigger Arranger sections on the fly. I don’t want it to look anything like Live, but that level of improvisation is a killer feature.

at least trigger Arranger sections on the fly

There are key commands for playing arranger chains from 1 to 20. But I think that the transitions could use a little work, if my memory serves me from what I’ve read.

Funny how the discussion gets along about a topic that was quite a game changer for me. I dared to change from using abletons live for years back to Cubase. Just when I felt pretty comfortable with Live (behause I finally knew my way around) I realized there‘s a lot things I just can‘t do with it. Now that I survived that transition I also realized the clip thing sometimes even distracted me from a linear thinking workflow in compositions. By the way the arranger track was one of the things why I gave Cubase a chance at all. I‘d really love to see this feature grow into something a little more complex yet more usable. Like „making the arranger track more arranger track“

Two things I loved in Lives competitor Bitwig is the intuitive way to add a certain automation lane and the possibility to add a dry/wet function to ANY insert effect very easily. Which in Live again still needs a very silly workaround. Not to talk about the hard to spot tiny little triangles resembling the mixconsoles fadercaps, because I don‘t wanna rant here…

Now that I survived that transition I also realized the clip thing sometimes even distracted me from a linear thinking workflow in compositions.

Yes exactly, my foray into recording was on a Boss DD-20 giga delay pedal with a 20 second loop recorder mode with sound-on-sound overdubbing plugged directly into my 1/8" soundblaster card… it was the most fun I had making music… but got me stuck in a terrible rut of not being able expand compositions. Took a long time to break that. So I have a bit of an aversion now to things like Ableton. I fear falling back into tht

Yeah, the tool takes it‘s part in shaping the product. It´s not good or bad in my opinion, it‘s just what you‘d like to achieve and then choosing among the given tools how to get there. And to stay on the topic: Steinberg should just sharpen their tool to be the best it can be.

Clips would be the last thing I would want from Ableton Live.
Instead I would prefer the instrument and fx racks and how easy to drag drop save them.
Also saving tracks with data as clips, again as drag drop to the browser that you can instantly drop back to another project.
I also like the creative plugin suite.

Any good idea is worth emulating. Cubase is my weapon of choice. I remember being ridiculed in the 90s for not being a ProTools user. I knew then the power of Cubase and nobody ridicules me now. BUT.

If a feature in another daw is amazing I want it in Cubase asap. In ableton you can hit 3 and paint a triplet. I think that’s freaking awesome. I cringe every time I reach for the quantize drop down menu just so I can write 3 hits of a snare.

There is no shame in recognizing something works better in another daw or realizing a feature is lacking. I’ve seen plenty of other daws, including ProTools, adopting features Cubase first introduced. I don’t care who has the idea first. I want all the best ideas in one daw.

I’ve stayed with Cubase because it tends to do just that. It should continue to innovate and adapt every good idea others have. I don’t know who has tried Reaper here but I am pretty floored that the entire software is 20MB or so and works much more efficiently than Cubase. I’ve wanted many times to add a new audio track while recording. Why can’t Cubase do that? Also why does audio playback have to stop when you add an audio track? I used to think there was simply no other way to code that since all major DAWs behave similarly. But then how does Reaper do it?

I’ve used Cubase for the first time on the Atari St in 1990, after starting on C-Lab Notator. I took a break from music for a decade I’ve used it only sparingly since, having various versions. I’m on Cubase 11 now trying harder than I used to to wrap my head around it.

Being a software developer and designer in another field, I understand tribalism and people saying, don’t change my software to be like the other, don’t use developers for things I don’t want to use… It’s like that in every software community.

When Cubase started, it was breath of fresh air, a truly easier-to-use software there was always something new. As opposed to Pro Tools, for example, which was conservative and corporate, and really just a framework for plugins you were forced to use.

Lots of workflows, like the clip-based workflow from Ableton, just look cool, and we should encourage the team to consider them, see if they can put their spins in it. Have a little faith in people. A little faith in the Cubase team.

I don’t know how the development of Cubase works, but it wouldn’t surprise me if asking for features to be developed in VST/i instead of the main app is meaningless because it’s the same group of developers anyway. But one thing’s for sure, as the price that we’re paying for this, I think that workflow stuff should be built-in and not an add-on.

Obviously if Steinberg could flip a switch and have every feature of every DAW seamlessly and flawlessly integrated into Cubase - by all means, flip the switch. But that’s just not the reality. There’s limited resources, and so many other things we need that, in totality, transcend a glorified looper.