Congrats on the amazing Dorico 3 release.


When I open my Dorico 2.2 scores (I’ve tried 4 so far), I get a “Missing Fonts” dialog box, but it’s completely wrong – it shows that I’m missing “Academico” in style “Text G3 Italic” and “Text G3 Bold,” but actually my score is using Mercury in those styles, not Academico. 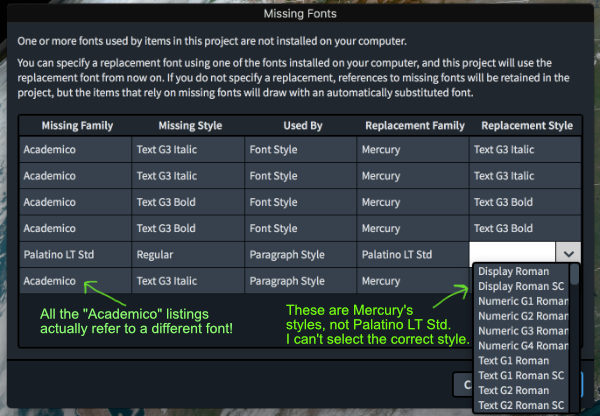 When I “Cancel” without setting substitutions, my custom music font has been replaced with default Bravura, and indeed (some of?) my font settings in Engrave mode are messed up — my Default Font now shows as Academico Regular, not Mercury Text G3 Roman. I confirmed this by opening my original file in Dorico 2:

In fact, all my fonts are messed up. This is the same file, opened in Dorico 3 without setting Font Substitutions; look at Dynamic Text and Music, Tempo, Metronome markings:

This did not change when I set the Missing Fonts dialog back to the Mercury family; my font settings in Engrave mode were still destroyed. There appears to be something wrong in the way Dorico 3 is reading font settings for earlier files.

(In fact, the Missing Fonts dialog box is behaving strangely;

I was surprised by this as well. I didn’t notice any wires crossed in the substitution dialog, but it did show asking for fonts that were correctly installed in the system. It also opened a project from 2.2 with different music font defaults, for some reason.

I opened a 2.2 project in D3 and it didn’t ask me for missing fonts, but it actually changed some of them.

Did you restart the computer after installing Dorico 3?

Did you restart the computer after installing Dorico 3?

In my case, no, I forgot that step. I’m doing it right away.

I did restart in my case - it looks like though Dorico 3 moved over the engraving/notation/layout options from Dorico 2, the preferences were all out of sorts, basically factory default. Additionally, the default font style and paragraph style were set to Academico. After changing that it seems it works.

No, restarting makes no difference. But asavage643 is right – it seems that just changing the Default Font back to my original choice (and changing the music font as well) fixed all the other incorrect font styles. But when I saved and reopened the file, I still get the “Missing Fonts” dialog. Weird.

In my case (and after rebooting) I can confirm that with other project my main font (Engrave > Font Styles > Default text font) has always changed to Academico (it was Avenir Next). The default paragraph text was unchanged, thus shift+x text and system text was unchanged, but playing techniques and dynamics prefixes/sufixes where in academico.

On a Mac, there should be no need to restart for a newly installed application to correctly pick up the available fonts from the system.

But, for the sake of clarity, there are font changes to the various fonts that are supplied with Dorico 3, so if you’ve installed Dorico 3 on a system that already has Dorico 1 or Dorico 2, it’s wise to restart before running Dorico 3.

All due respect, pianoleo, but as I said, restarting has nothing to do with this issue—Dorico 3 does not seem to respect font choices from Dorico 2 scores, including replacing the music font with Bravura, and incorrectly reports the fonts used in the document. (I agree restarting is never a bad thing, but it seems to be immaterial here.)

Hi,
I also opened my Dorico 2 file today and didn’t see any problems at first, but now I noticed my Segno signs are some other strange sign… Maybe this has something to do with it? Can somebody tell me which font style the segno sign is in and what font it should be?
Thanks!

In my case (and after rebooting) I can confirm that with other project my main font (Engrave > Font Styles > Default text font) has always changed to Academico (it was Avenir Next). The default paragraph text was unchanged, thus shift+x text and system text was unchanged, but playing techniques and dynamics prefixes/sufixes where in academico.

I can confirm this is happening to me as well on Windows 10. Rehearsal Mark, Immediate Tempo Text, Tuplets, etc., basically everything under Font Styles is changed to Academico, even though my default font isn’t marked as missing upon opening the file, and everything using my default font under Paragraph Styles remains unchanged.

I didn’t get any missing font warning with my text fonts, but here tuplets and rehearsal marks were changed to Academico upon conversion. 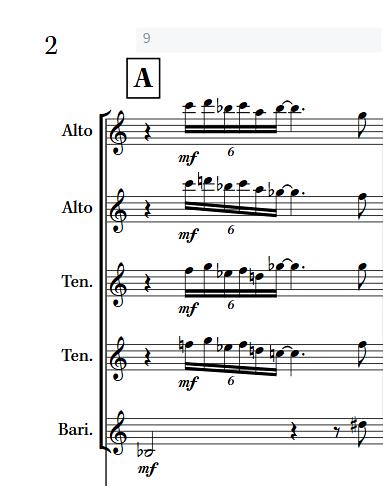 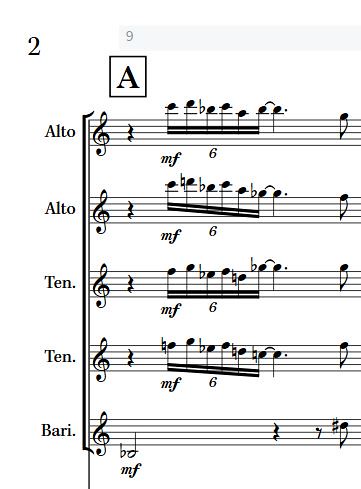 This same issue is happening to a client of mine. He’s on Mac.

Sorry to hear there’s a problem here. Please attach a project that exhibits the problem, and I’ll look into it as soon as possible.

Sorry to hear there’s a problem here. Please attach a project that exhibits the problem, and I’ll look into it as soon as possible.

The strange thing for me is that the same project shows this error on my client’s computer but opens without issue on mine. I’ll email you the file anyways (can’t share it publicly). Thanks.

I may also need a copy of the userlibrary.xml file from your Dorico 3 application data folder in order to get to the bottom of this.

I’m also having this dialog appear when I open a score with my old font settings from Dorico 2. However, the actual fonts in the score appear fine, I’m only getting the dialog box. I’ve attached a screenshot.

The issue I’ve noticed is that it says I’m missing the “regular” font style of my font (Iowan old style). Curiously, I can reset Iowan as my font replacement (ie- replace Iowan with Iowan) but “regular” isn’t an option so I have to select “Roman” (which is similar). Then once the score opens, “regular” appears as a font option within Dorico. So it seems the font dialogue doesn’t see all the style options whereas once the file is open Dorico does.