According to the manual, there should be an arrow to expand the Tempo track: 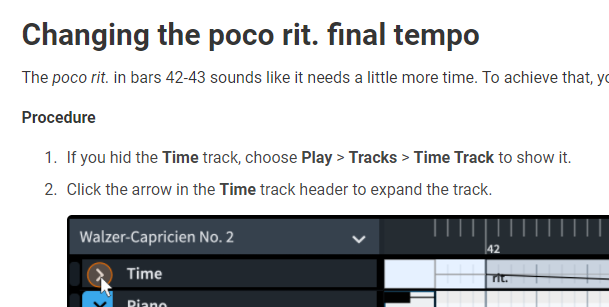 But it doesn’t appear for me: 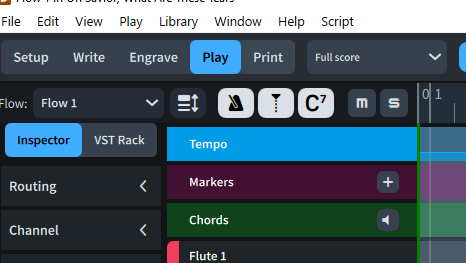 And the button to expand tracks: 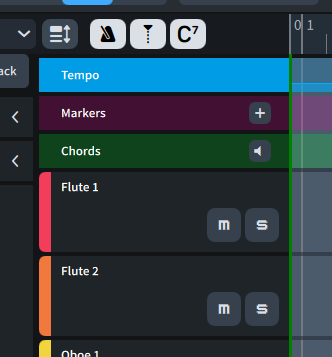 What am I missing?

There are several elements that are yet to be reinstated into the PLAY GUI since it was completely rebuilt for Dorico 4. The dynamics lane is also missing. Daniel has mentioned that they will reappear in maintenance updates in the fairly near future. Just keep an eye out for them…

On page 11 of the Dorico 4 Version History:

“Play mode in Dorico 3.5 and earlier versions included a few other editors that are not yet included in Dorico 4, including the tempo editor and the drum editor. We are sorry that these editors are not included in the initial release of Dorico 4, but they will return in new and improved form in a future free maintenance update. In the meantime, we apologize for any inconvenience caused by their absence.”

Apologies for the confusion @StephenWeatherford – your screenshot is from the First Steps guide, which was written in/for Dorico 3.5 and hasn’t yet been updated for Dorico 4.

For information about how the new Play mode works in Dorico 4, refer to the Dorico 4 version history (as this isn’t yet included in the Dorico 4 manual).

Any updates on getting this fixed? Unless I’m missing something else, without expanding the vertical space in a track, there appears to be no easy way to manually edit tempo changes. Thx.

Dorico 4.2 has brought back the tempo track. If you’re still on 4.1, I suggest you update! And 4.3 is not too far, as we’ve read in the forum, and should be quite satisfying for everyone.

Yes, in fact the tempo editor was reintroduced in Dorico 4.0.30, back in March of this year. As I wrote in the blog post announcing the release of the update:

To use it, first ensure the Key Editor is shown in the lower zone. In Write mode, if linked mode is activated for the Key Editor, selecting a tempo marking in the music area will show the Tempo editor in the lower zone; in Play mode, you can simply select the Tempo global track at the top of the track overview. The new Tempo editor should feel very familiar, as it is functionally identical to the corresponding editor in Dorico 3.5 and earlier versions.

For what it’s worth, the forthcoming Dorico 4 update will change the way you access the tempo editor again, allowing you to simply add a new lane containing the tempo editor to the Key Editor, regardless of whether you have a tempo item selected, which will make it much more convenient overall.